Ciao to everyone!
This time I’m glad to show you the skin in which I empathize better. The 90s culture!
I wanted to transmit this nostalgic atmosphere to one of my favourite champs, Gwen. 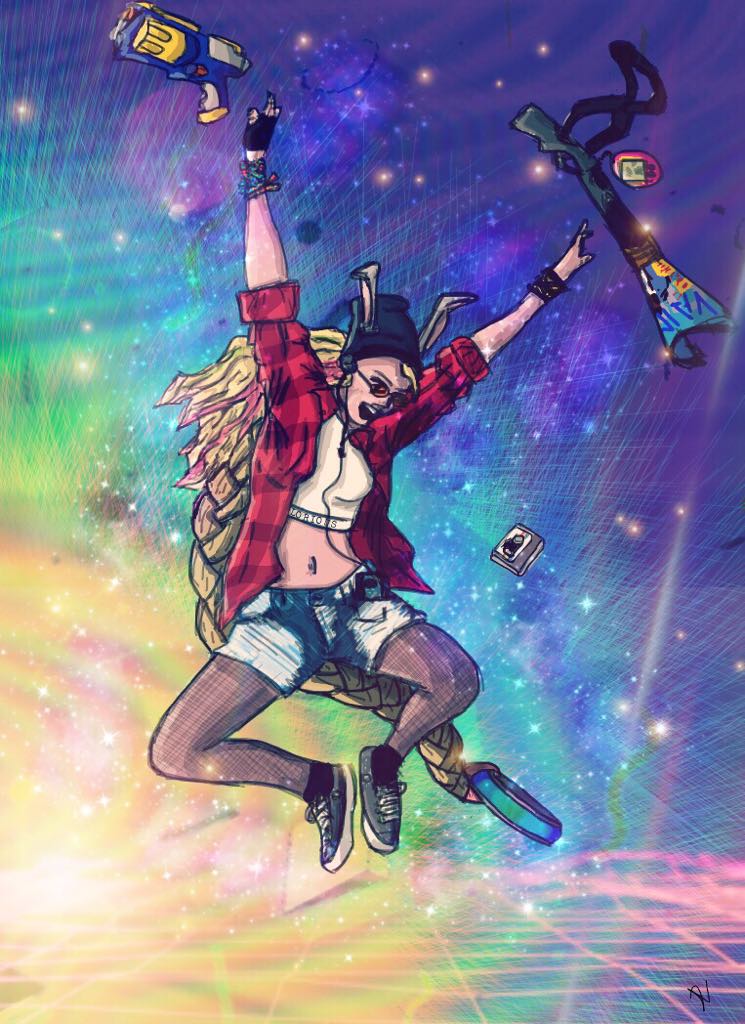 The style is colourful and with a lot of details. I got inspired by the main trend of 90s girls and the most common gadgets I could remember.

If you missed my previous topics, go check them:

Hello everyone! Today I want to share with you my Ozo Skin Concept, probably my favourite in style and lore. My idea was to set Ozo many years in the future, so now he’s old, with a warrior armor and a mysterious power that took control of his mind. I spent so much time to make the details and I’m a bit proud of what I’ve done. Let me know what do you think

Here’s the Lore I wrote for this skin concept:

Years go by but Gwen does not seem to have lost her hand. Anyone who is under the infallible aim of the young gunslinger, ends up with a bullet in his head.
“Headshot! Wohoo!” Gwen screams, while another minion falls to the ground.

But the girl’s joy fades soon. No enemy seems to be at her level. Even Taka is amazed by her abilities during the last fight.

“I hear you, you’re too noisy.”
Gwen points the rifle to her right, in midair.
Taka appears in front of her, ready to attack with his blades.
“And you take up too much space, you limit my movements.”

“Why do not you take a break? I can easily get away without having you around for a while.”
Gwen looks at him with a strange expression.
“You would not survive a day without me, and you know it.”
The two laugh, sitting on the ground, in the darkness of the night.

But inside, Gwen feels the need to take a rest for a few days, put aside the weapons and devote herself to something else. And the girl has the feeling that something is missing in her mind.

Lying on the bed, she turns an old walkman in her hands and looks thoughtfully at the poster hanging on one of the pink-gold walls of his room, among the posters of his first sizes. A rock band, formed by boys with long black hair and studs on clothes. A sense of nostalgia pervades the girl, and pushes her to remember the period in which she had attacked the poster and was a fierce fan of that band, which now no longer exists.

“What I wow give to go back in those years, even just for one day …” Gwen sighs to herself, then falls asleep with music in her ears.

In her dream Gwen wanders around the shops of the city where she was born, with her old cap covering her head and the plaid shirt she always wore.
She stops in front of the store windows and reads the offers on cathode-ray tube televisions and videotapes of movies that watched at night when she was a child, while everyone was asleep.
With headphones on his ears, she enters a music store, flips through a rich cluster of vinyl records until she takes out one. From the orange lenses of her sunglasses, the girl reads the name of her favorite band: the last album produced, the one she missed to add to the collection.

Satisfied, she comes out with the disc in her hands and heads home.
Just a moment before entering, a group of kids chase each other shouting and laughing. The girl behind them chases them, with a toy gun bigger than her arm, and shoots sponge bullets.
Gwen is amazed to watch the scene and returns home.

The girl then wakes up, runs out of bed and opens the closet, rummages through the sea of ​​clothes and gadgets, until she finds the checked shirt. She goes back in search of old objects whose existence she no longer remembered, but who had been there all the time, waiting for her.

All I can think of when I see that skin is Axl Rose. I like it!