Welcome to the Vainglory Hero Spotlight, today we will be looking at Janice, a Herald of Enlightened Prudence.

Janice was, to be frank, was a complete and utter mess of a champion when I first created the concept for the hero. She had an incredibly overloaded kit with too many complexities that didn’t make sense with the overall theme of her character. Despite all this, she was very weak due to crippling energy costs and many situational elements that made her unreliable. Her lore was also very incoherent being tied to the Heralds of Living Bright and Malleus on a very flimsy premise and a bit too overpowered in the universe of Vainglory.

This rework is meant to streamline Janice’s character and reinforce her role as a powerful support hero with her own unique place in Vainglory. Her kit is now much less complex and overloaded and more fun to play with as well as ensuring enemies can still counter her if they exploit her weaknesses.

She has also storywise been depowered as with the rest of the Heralds so they are no longer divine angelic beings, but the manifestations of heroic people whose stories live on in our hearts with hope.

Much about Janice’s origin remains a mystery, shrouded in countless stories and legends for one to recount properly. However, among the various tales regarding the spiritual Heralds, one story has been frequently told more than others addressing the Brilliant Maiden, or the Incandescent One.

The story tells of peaceful kingdom forced each year to send one girl of exceptional, skill, wit, and magic potential to a large empire. For what purpose the empire wanted those females, no one really wanted to knows aside from a variety of terrible theories. Every new year, instead of rejoicing and hope, there was despair and sadness as the king’s soldiers would forcibly rip a daughter or mother from their weeping families and friends, the sounds of pitiful cries filling the air.

It was the kingdom’s princess and the king’s only child that eventually stepped in to take action. The princess was a kindred and gentle soul and was well known throughout the land as a charitable and benevolent person who cared for all the subjects dearly. Every year she saw a girl being taken away wrenched at her heart.

Without her father’s knowledge, she ordered the king’s men to affix her onto a large pole and take her to the gates of the empire. There in full few of the people of the empire, there was no proclamation or long-winded speech. The princess; doused in scented oils simply set herself on fire while everyone watched her self-immolation. The flames eventually consumed the entirety of the pole and her body yet there were no screams of agony. Soon the flames evolved into a howling firestorm fed by the winds that fanned the inferno on.

It was said that the flames converged into the form of a bird before extending into the sky. The soot and smoke darkened the skies as clouds converged. A deep rumble and a downpour of rain soon followed extinguishing the remaining conflagration. The rains continued for months as if the skies themselves were crying. Investigations of the stake revealed only ashes but no burnt body.

The empire horrified by this sudden display of violent self-sacrifice stopped demands of girls from the kingdom each year. All over the kingdom, people wept for their princess, both thankful for her saving their daughters and mothers from an unknown fate as well as her untimely demise. The king for the rest of his reign locked himself in the castle and become a recluse. He died a few months later of heartbreak.

However, the one who suffered the most was the princess’s personal knight who she had drugged the knight of her fateful departure to prevent him from stopping her plan. His grief was so deep that it eventually drove the noble knight mad. This led him to commit unspeakable atrocities as he renounced all that was holy and divine. He was eventually executed for his heinous acts and beheaded. His body was buried in peat marsh with his deranged cries whistling in the winds.

But on the final month of that fateful year, the rains stopped and the clouds parted to reveal the luminous sun itself. The people of the kingdom noted that the sunlight was gentle and pleasantly warm. Suddenly, the brilliance increased and people saw a spirit of light descend from the clouds in humanoid form.

The figure resembled a female wrapped in bandages of white surrounded by a halo of gold behind her. Her bare foot touched the ground as she slowly walked among the startled crowd. The most startling feature was that she had no real head, but a hovering incandescent orb instead. A brief moment later she was gone. Some speculated that it was the long deceased princess now once again walking the earth.

Despite the fantastical elements of the story and the obscurity of the kingdom itself, Janice’s name is still mentioned throughout the land. It is said that those in times of dire need who pray to Janice will miraculously have their plight answered. They speak of people on the edge of death miraculously living to tell the tale of their survival. Maybe Janice is just a myth and story, but the powerful feeling of hope uttering her name brings to the masses must mean that so as long as wrongdoing exists, Janice’s story will continue to pass down keeping the spirit of her sacrifice alive.

Now more so than ever.

On the Rise, Janice is a powerful support who supports her team from the backline, preventing enemy incursions with her spiritual protection, while able to save allies from danger at extreme distances.

In a desperate situation, Janice offers her team Salvation and sanctuary, turning around even the most hopeless of team fights.

Whenever Janice heals or shields an ally hero, she regains 20% of the heal, fortified health, and barrier strength as ENERGY.

Additionally, each of Janice’s abilities are granted an additional effect on overdrive.

Janice INSTANTLY forms a 7-meter long gate in FRONT of her that lasts for 3 seconds. Enemies attempting to cross through the gate are BLINDED severely reducing their vision radius to 3 meters while also moderately SLOWING them for 1 second.

Overdrive: Janice can cast Brilliant Bastion BEHIND an allied hero who is within 8 meters of her presence.

Janice targets an allied champion and channels for 1 second. After successfully channeling, she will DASH BEHIND the targeted allied hero granting them FORTIFIED HEALTH and a speed boost for 2 seconds.

Janice channels for 2 seconds before releasing a wave of light that KNOCKS BACK all enemies heroes 4 METERS away from Janice’s cast location.

Allied heroes within 4 METERS of Janice after her ultimate successfully finishes channeling receive a BURST OF HEALING. Burst heal scales with 6% of Janice’s BONUS health.

THANK YOU FOR WATCHING THE JANICE HERO SPOTLIGHT, IF YOU LIKED THIS HERO IDEA DON’T JUST LEAVE A LIKE BUT COMMENT DOWN BELOW AS YOUR ENCOURAGEMENT AS WELL AS FEEDBACK REALLY HELPS OUT THE AUTHOR

VAINGLORY IS OFFICIALLY IN CROSS-PLATFORM ALPHA. DOWNLOAD AND PLAY TODAY!

Is it bad that the name instantly reminded me of her… 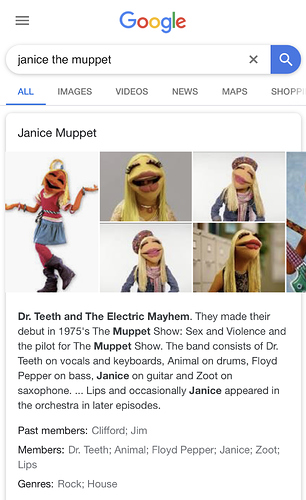 Much about Janice’s origin remains a mystery, shrouded in countless stories and legends for one to recount properly.

In the beginning, she was once and originally a muppet of rock.

But what do you think of Janice overall though?

A solid captain that is pretty much balanced imo.

Im not really fond of healing heros since we have enough of them in Vg but I love how you incorporated Fortified Health into her kit since only Phinn does that.

Unrelated, but we only have 3 heroes that can heal your team (4 if you count petal I guess). You think that’s too many?

What do you think of Janice as a hero compared to her original form?

It’s a pretty cool design, though definitely not your best.

Her abilities don’t feel particularly unique, but they certainly function as a kit with the proper tools for a protector/captain. To me she just doesn’t bring a lot new to the game, she seems like grace + Lyra really.

Probably the only “problem” I see is the 2 second channel time on her B, that’s frankly insane for a non ult. I understand you want to incentivize using it on low HP allies, but 2 seconds is adagio ult channel time! I would reduce it to .8 seconds at most, as it’s a core ability. The cleanse should effect on overdrive regardless of HP, then I’d add additional fortified health for bellow 35%.

Probably the only “problem” I see is the 2 second channel time on her B, that’s frankly insane for a non ult. I understand you want to incentivize using it on low HP allies, but 2 seconds is adagio ult channel time! I would reduce it to .8 seconds at most, as it’s a core ability. The cleanse should effect on overdrive regardless of HP, then I’d add additional fortified health for below 35%.

I would say maybe reduce the channel to in half and make it 1 second. Varya’s dash charge up is 0.9 seconds so I feel a 1-second channel is fairer considering the extreme range the cash grants.

Also, @coltonJW what about her implementation of a blind mechanic (that’s a unique take for Vainglory) as well as being the only heal to ignore mortal wounds? I feel like their not big wow factors but definitely still unique. Not to mention her heal increases based on how low her allies are. Smart timing of heals and fortified health will also regenerate her extra energy.