Why are players so toxic? 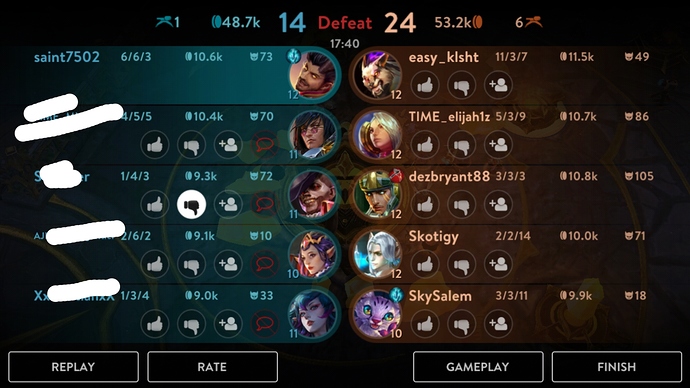 Screenshot_20180713-095518.jpg1920×1080 1.2 MB
Literally my entire team wanna get mad at me for choosing Reza yet I did the best on my team yet they wanna spam ping me. Dude was so mad that I went Reza into a Celeste but clearly he never played Reza in lane because dude’s a beast and I was doing well but my whole team just wanna blame me even though we literally had a Baptiste who was intentionally losing half way through the map. Just so mad that people wanna get mad and waste my time while I try to carry
Saint7502 July 13, 2018, 2:17pm #2

Literally can’t even say I wasn’t participating in teamfights cuz I literally got the most kills and assist while having the most damage on my team and doing more damage then the enemy team! 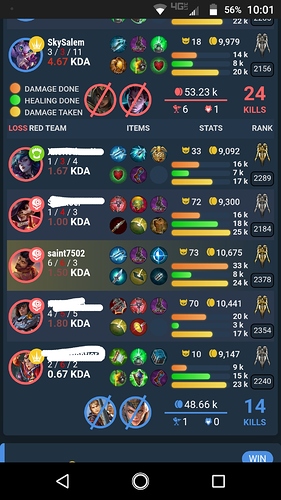 Firstly, you gotta blank out the names.

Secondly, I agree with you. Reza is insanely strong atm.

You need to obscure the names, as @Ve3nNo0wM says.

Okay, will hide the whole thread, then.

Can you just unhide the post so I can edit them?

@hazeleyes when you hide post people can’t edit them see. 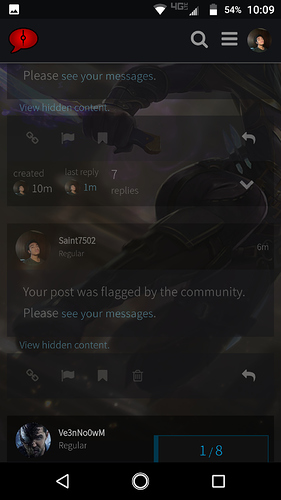 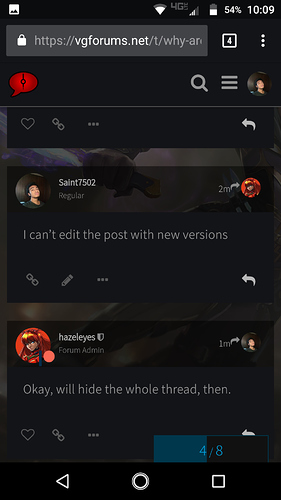 Everyone else is able to edit hidden posts. That’s how they get un-hidden.

Edit: see you fixed them. Thanks.

You also had 6 deaths. Which is also the highest nr on your team.

At what stage of draft did you select Reza?

I wasn’t able to edit them you can see from the screenshots there was no edit button. I don’t know why it was like that.

You say I got six deaths like I wasn’t doing the most damage, getting the most kill, and most gold. I don’t remember at which point I chose Reza sorry.

Players are toxic because we litterally can’t communicate with each other. (Pings are shjt).

The circumstance I see most is a premade 2 people, 1 top 1 support. Support goes top and help him all the time and left mid there. Mid has to 1v2 and starts feeding. Then Support and Top can’t get any kills and invade enemy jungles and die there and now… 3 people start rage ping. Not to mention Jungle never knows about the gold funneling tactics and devide to take Gold Toads and all other camps alone, then ping why I can’t 1v1 enemy while my enemy has 1 level above me. My god, earache. As a SoloQers, people I hate most are premades.

Its because t9 is complete garbage and the SoloQ experience becomes worse and worse once entering VG. I played 3 games last night and clocked in 6 ELO in total from two wins and lost 6 ELO in total from one loss all because teammates still feed in t10 and can’t wait 6 minutes for me to get my Sorrowblade and t1 attack speed item and carry the game. A day or two before that I literally climbed all the way to 2544 just to get paired up with garbage players and go back to 2524. The game doesn’t even reward top 100 players with anything. My favorite tier for climbing was t3 but that doesn’t even exist anymore.

On your Reza pick, it doesn’t even matter because that draft is doodoo vs the enemy team one. Lyra is literally there to just stop the Fortress, Baptiste gets touched by Celeste and Adagio from a distance, Lorelai is just there, Baron gets touched by Fort, Idris, Adagio, Celeste, and Flicker. The Reza pick just shines in mid game, where Idris probably unlocked WP path but you can still duel him, Celeste isn’t online, Fort has overall least impact in mid game, Adagio’s power decreases by like a lot, and Flicker if he built health gets popped.

Its because t9 is complete garbage

T10 still garbage.
“No, let him bot. He is VG Gold, this is free elo for you guys.” -> not giving him bot -> they both start swearing -> premade detected -> Check VGPro, yeah he was VG Gold -> one of them pick Lyra CP/Vox WP/any gosu shjtty hero full burst in game and fed 1/10 -> I rude ping them both to dead.

Me? In draft? “I never feed. I just sell my turret to them if support leave me and rage ping to deathhhh”. I know, no matter how good you are, how ‘premade’ you are, if I let their mid has gold advantages and snowball, it is gonna be fcking hard to stop them.

I wasn’t able to edit them you can see from the screenshots there was no edit button. I don’t know why it was like that.

Holy shit this is so accurate. Lyra really did go and help Baptiste the whole time at top. I didn’t even die because I was ganked a lot I mostly avoided them and only died to one which was 1v3 gank with a fortress, Flicker, and Celeste who was already mid lane, so imagine trying to avoid a fort and flicker lol. Majority of my deaths came from the later half of the match when my teammates thought it was a good idea to troll and just blame me while I try my hardest to get some kills for them.

There are still a lot things to do and I can’t tell my teammates to stop doing shitty things (for example, taking the 2 minions camp when all lanes are being pushed) -_-.

Exactly lots of players are against voice chat but we really need it. I want to be able to communicate with my teammates so we can win. Also if I’m able to communicate properly the game will just be less toxic overall because everyone isn’t tryna just do their own headstrat and hope your allies work with you. You will actually be able to talk and discuss strategy.