[VISUAL] An Attempt at Improving Guilds #2

This is a sequel to a thread I made ~2 years ago, and although guilds have improved over time, their current state seems… abandoned. The guild system in Vainglory isn’t as engaging as it can be. If you sum up what guilds are in VG, it doesn’t sound exciting at all. It’s one loooooooong grind for arguably “okay” rewards. That’s, like, literally the only direct objective there is to a guild.

To me, the guild system now just seems like an add-on feature as relevant as Opals, and this thread hopes to address that “problem.”

NOTE: Take every numerical value with a grain of salt. They’re all just placeholders to avoid riddling the thread with a bunch of XXX’s

Streaks are a way to grind EXP faster by rewarding consistency among members. 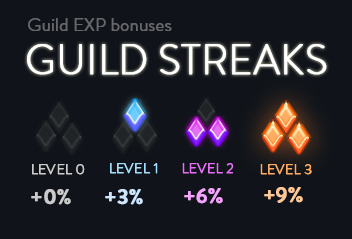 TL;DR: Streaks are Guild EXP bonuses that you can earn and spread by playing with guildmates. 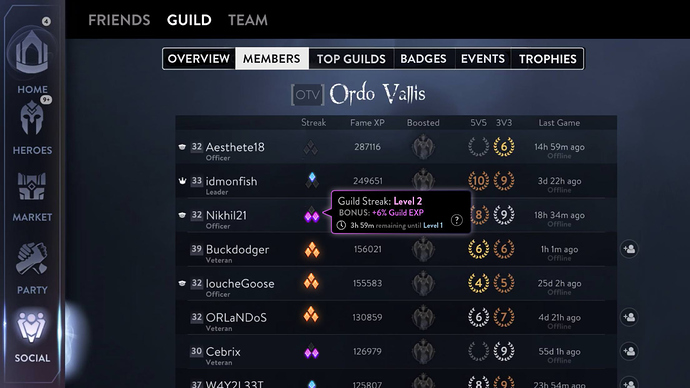 In the members tab you will be able to see the streaks you and your fellow guildees have. Tapping on a diamond will display general information about the streak. Similar to how the Blueprint System has its own in-game tab of mechanics, the (?) button will direct the player to a tab of mechanics as well. 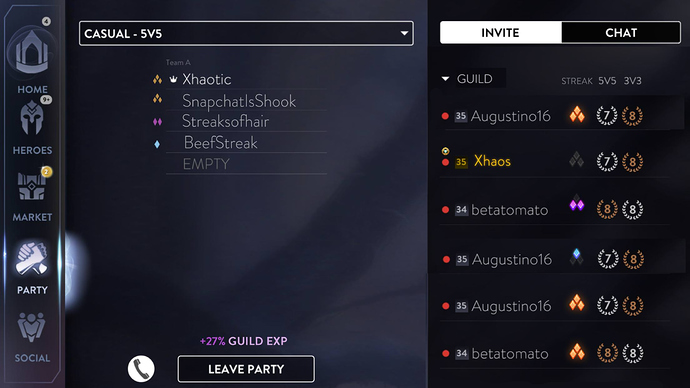 Forming a party allows you to see the guild’s streaks as well. Guildmates inside a party have their streak icons simplified beside their names. The total bonus is tallied in the above the LEAVE PARTY or CANCEL button. (Off topic: Supporters have their names in gold with an ICE icon above their “busy” or “available” status.) 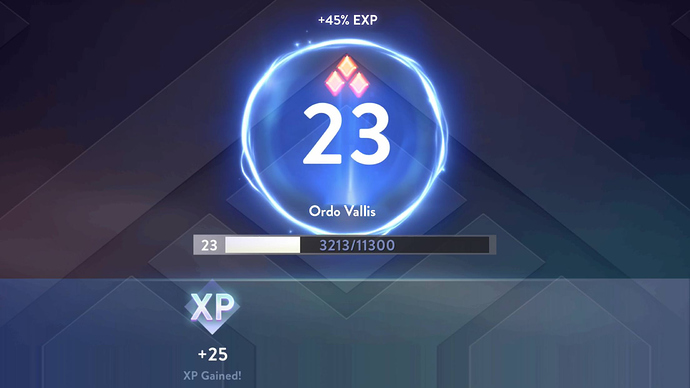 When Guild EXP is added, your Guild’s name is now displayed instead of your IGN. Your streak icon is above the guild level, and the total bonus is tallied above the streak icon. I spent an unnecessary 2 hours trying to figure this part out. I didn’t want to ruin it too much. 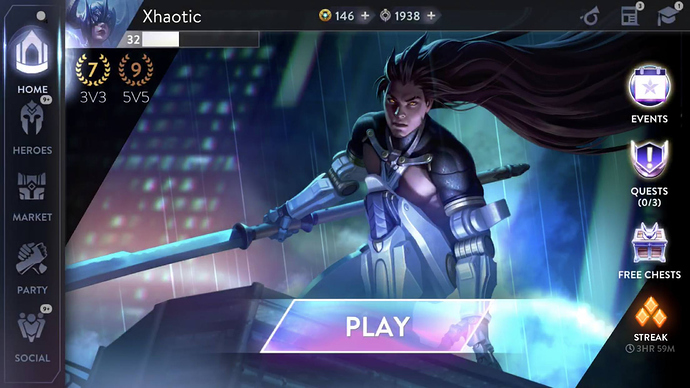 image.jpg2208×1242 390 KB
Streaks in the home screen
Because of the time-limit streaks have, it might be handy to put your streak information in the home page.

Levels shouldn’t be the only accomplishment a guild can achieve. (Credits to: http://atlas-reactor.wikia.com/wiki/Atlas_Reactor_Wiki for the badges) 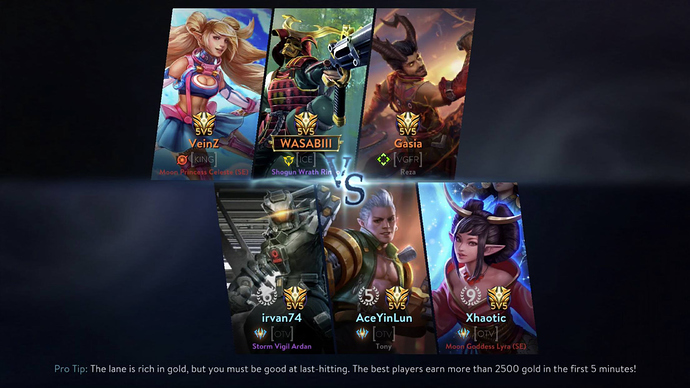 As a part of making guilds more customized, leaders can set guild badges to be displayed in loading screen matches. However, they are more than just aesthetics. They are a representation of a guild’s hard work and dedication. Badges, like in real life, are unlocked only when earned. 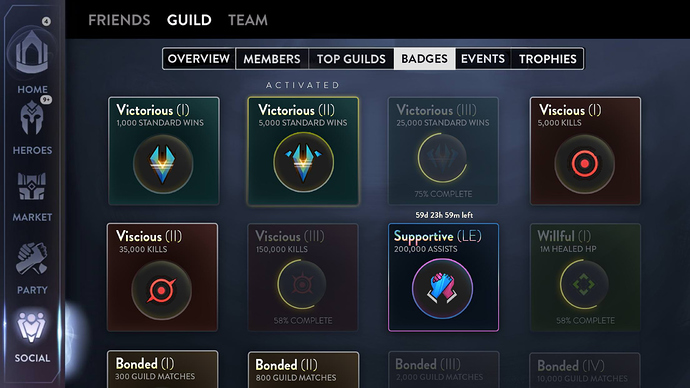 In the BADGES tab, you will be able to see an array of blocks containing icons that mark a certain achievement. A badge can have multiple tiers with increasing difficulty. Transparent blocks are unattained badges.

YES I KNOW I MISSPELLED VICIOUS. I was thinking of VISCOUS OK. We love a sticky and thick guild.

“That’s it? Just a badge for all that hard work?” You might say. 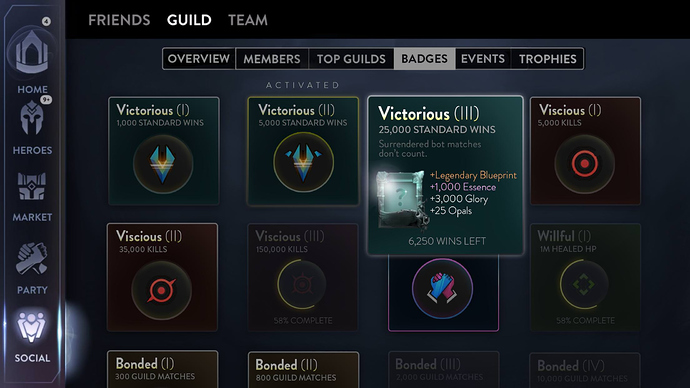 Tapping on a transparent block will reveal additional details and rewards. It doesn’t have to be that generous because accomplishing those achievements come with playing normally. You’re simultaneously doing everything at once. 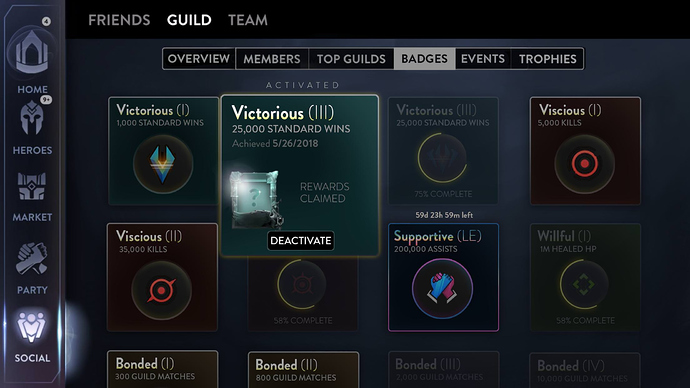 Tapping on an opaque block will show you when the guild achieved this specific award. It also gives you the option to de/activate it. 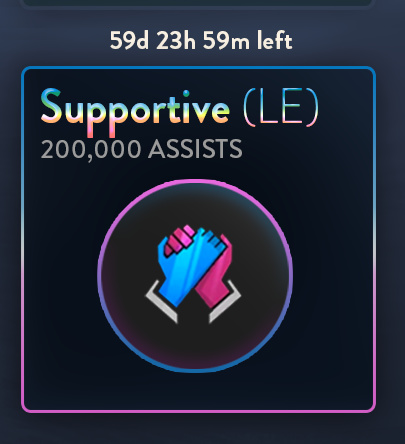 Accompanied by generous rewards, guild badges can be more interesting when time limits are present. There can be Seasonal and Limited Badges. Perhaps these types of badges deserve the

This idea is more “conceptual” than the rest if that makes sense. Instead of a grain, take it with the “tears of every SEA player” amount of salt.

I don’t really have any specific mechanics in mind for it, but I like the idea of a weekly activity / event for a guild to do. Here’s an example of a possible Guild Event. 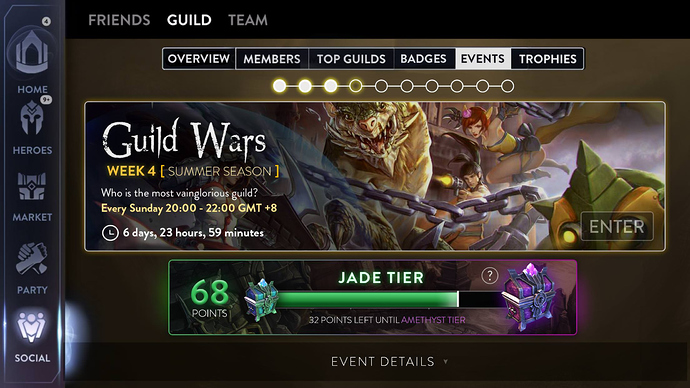 Guild Wars is a 10-week event where guild parties will be matched with other guild parties during a specific time duration once in a week. Each game will earn points for the guild. Each win will gain significantly more points, of course. Depending on how many points your guild has gathered, you will be placed in a tier. The higher the tier, the better the rewards when the event ends.

To be honest, this is barely anything. I just get tired of the same old blue color of the guild page.
Guild leaders will now be able to choose a guild theme. 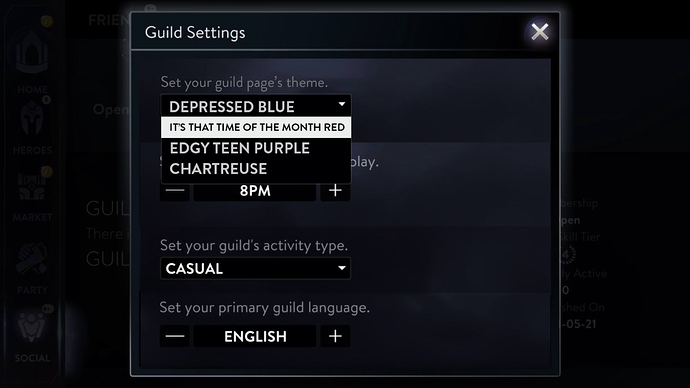 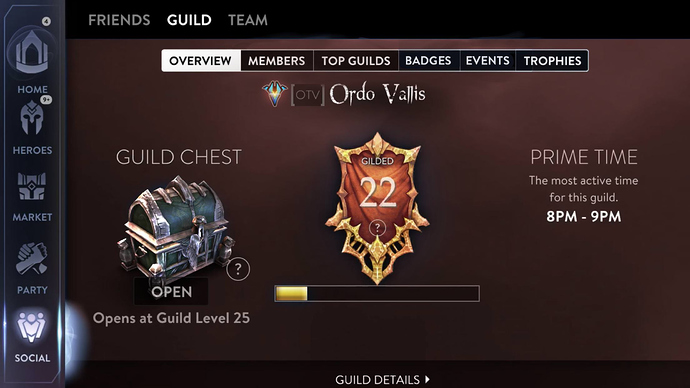 The activated guild badge is beside the flair [OTV].

I don’t know if the ideas above will even come close to achieving those objectives, but we got to start somewhere. I hope my point doesn’t come across as “jUsT gIvE uS mOrE rEwArDs!” But more like “give us players more to do and more to accomplish because guilds can be so much more than getting a few RARe talents every 5 levels of grinding.” That last bit was an exaggeration, but you get my point

Thanks for taking your time in reading the thread!

This is just incredible, the amount of work you put into this is seriously impressive.

I want to really emphasize how wonderfully you’ve thought about not only the core mechanics/function of each idea, but its visual appearance, too - that your examples are not just a representation of your idea, but are aesthetically similar/familiar to Vainglory’s existing appearance, down to the colors chosen/palette.

Of the many things you’ve come up with for this new take on Guilds, I think what entices me the most is the idea of Guild badges. Working towards something as simple as a milestone is often rewarding throughout the journey moreso as it is the accomplishment itself. The accomplishment and reward of the grind only then kindles the desire to achieve something greater thereafter.

All in all you’ve crafted an amazing experience we could only hope and dream to be implemented into Vainglory. After reading through this all and absorbing the images you’ve providing it feels all too real, for lack of a coherent way to word this: I am craving these features you’re presented as if they are something that’s been taken away from me but I have already had, and not as something I’ve yet to experience.

Well done, seriously. I want this so bad, I almost wish I hadn’t read it.

I don’t know if you recall, but when you posted that original thread 2+ years ago, I RAVED about it – it was brilliant, and although I know some of the devs saw it (and more were aware of it), as we all know, not one damn thing changed …

This update to your original ideas is similarly brilliant and should be implemented IN ITS ENTIRETY.

I can’t express how much I love this. It’s EXACTLY what the guild feature (and the game as a whole) needs!

Oof tfw you put more effort than SEMC in the past year or so in trying to improve guilds. The visuals are so aesthetically pleasing to me, SEMC PLS ;-;

Really impressed with the graphics and effort put into this.

SEMC, just hire this guy!
This text won’t be blurred

When a fan is better than the own company…

Shame the devs don’t really pay attention to what we want as much.
I would love to see this.

I think it would be cool if SEMC would hold skin design contests where the winner would get their skin added to the game. Also maybe fan hero’s. (Wasn’t the first kestrel skin fan art?)

They should have actual events to interact with their community.

this literally made me cry with how gorgeous it looks ;-;

As always an epic piece of work!

Just so you know the relevant devs have had this brought to their attention - I hope they take some/all of it onboard.

Good looking previsuals. I don’t know how your resume looks but try for a position with a game company and get some exp. I don’t think SEMC really engages with its fanbase the way other successful games do. Pitty.

I hope if any of this is even remotely considered for implementation, that @Xhaos gets some sort of recognition for his work, on their part.

Sorry for the late reply, but let me just say thank you (and everyone) for the kind words. It really makes my day knowing that people like the ideas I presented.

They are awesome! How couldnt we love them?

Bots have infiltrated the forums!