The Pros opinion on the current meta 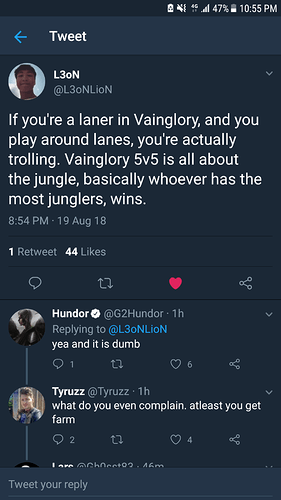 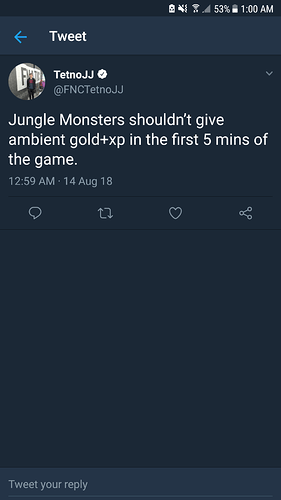 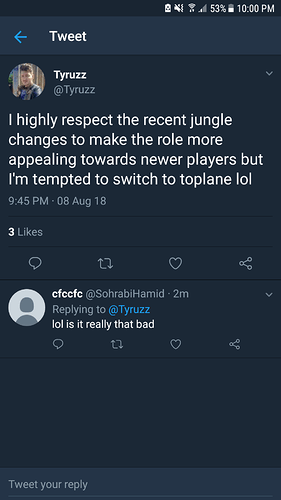 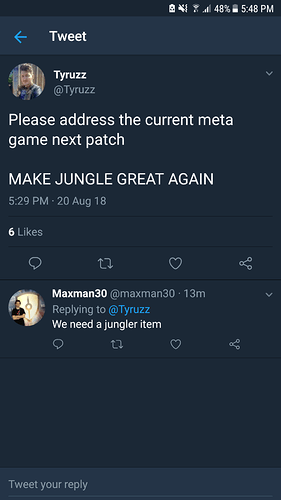 Vainglory, the 5v5 moba with no lanning phase where laners spend more time in the jungle then in lane. Get rid of ambient gold otherwise this unhealthy meta is here to stay.

Edit: One solution would be getting rid of ambient gold and xp, adding an item like old iron guard contract that would cost 600 gold that would give either hp, cd reduction or some armor and shield. This item would be bought by captains only to get gold and wouldn’t be advantageous for carries to get since it would put them 1200 gold behind in terms of damage itemization. Last hitting a lane minion should give more gold to compensate for the ambient gold carries were used to get so that games don’t become longer. This would result in actually having a lanning phase where laners actually farm their lane and win their lane match up it would also mean junglers have all the jungle to their disposal and can make the dicision to be anywhere on the map instead of hovering bot lane.

Best feeling in the world when I am mid and my jungler is t8. Even if I am winning against other mid jungler and bot don’t rotate want when buffs spawn roam goes bot (???) for no reason so I lose my entire early game without being able to counter play in any way.

Vainglory, the 5v5 moba with no lanning phase where laners spend more time in the jungle then in lane. Get rid of ambient gold otherwise this unhealthy meta is here to stay

without money, how can you keep your friends???

err… i mean… without ambient gold captain will starve, right?

Bring back old IGC. I would love that!!!

You create an item like old iron guard contract, it would cost 600 gold so that it wouldn’t be advantageous for a carry to get it and maybe give it some passive hp or armor and shielding so that captains aren’t weak at level 1.

i like the idea… I can see how it would work. I just wonder if this item would make playing Captain a little boring in the early game.

Maybe the opposite will happen and everybody wants to be captain, since it’s the only way to get ambient gold.

I’m confused, what does captain do if there’s no benefit to tagging along jungle or lane? What about those invader duos? Isn’t forcing captain to buy one item what have us PW RD and CpP?

It wouldn’t change the captain position as captains never shared jungle ambient gold in the first place and they would still get gold from lane minions with the contract. Captain will still be about rotating around the map to set up ganks or deny them.

What if the jungler buys IGC and just plays a captain, in the same vein as top?

Triple captain meta sounds good for a dirty Kensei one trick like myself, but for the other 10% of my brain that enjoys playing other characters it don’t sound too good.

I suggested that it should cost 600 gold and only give stats that benefit captains like hp, cooldown reduction. It wouldn’t be worth getting this item for anyone besides captains.

Those stats are universally good. You could go jungle Cath, start ironguard and go for SGB after a clear.

Personally I would like to see Jungle mobs be tougher and take % reduced damage from ranged characters as a starting point but hey that’s just me.

Had to fight a double captain kensei just now. It made me want to vomit… 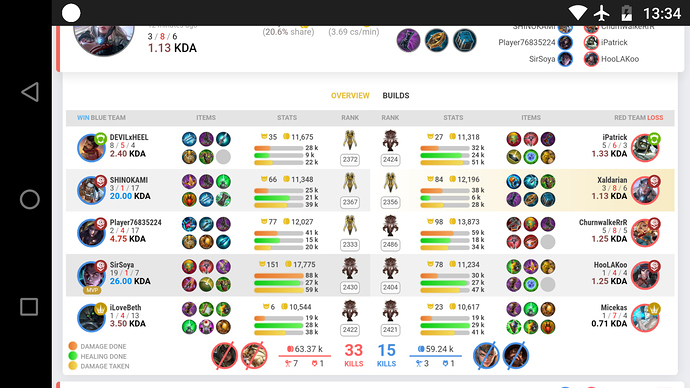 and make lane minions worth more gold, people literally let an entire wave crash on their tower to share ambient. Ambient of red jungle is 260 gold, thats like 2 and half waves so lowering jungle ambient and increasing lane gold could work

Something needs to change for sure. Nowdays the games are decided in the jungle only and as said from the pros - laner should not stay in his lane at any phase of the game.

They really need to expand their item roster and add back/revert the ancient ambient changes they did a LONG time ago.

More items for every path in general.

i would gladly take a “two patches a new hero” type of wait for new items.

sorry for my rant

Imo there isn’t really much we can with ambient gold without changing the entirety of the game. 7/8 of the playerbase doesn’t even know how to utilize ambient gold, or share XP. I feel the problem is that the red jungle has more gold than the crystal jungle and the same XP as well. You’d think that the mid laner who needs level more than money would be having a jungle rich in XP but nope. That’s why Samuel (a mid laner who needs money rather than XP) is always doing so well despite being nerfed every other patch.

My solution is to create an objective that spawns in lane, perhaps Gold Toad, in the 4 min mark. This will make laners who know how to trade well and control the lane do better than those who don’t. Now you may be saying “well this supports the duo bot lane.” Well it doesn’t because if you wanna win you as a jungler should try to help the top side collapse on the enemy jungler and bot laner. The Toad should just give a large amount of gold let’s say 250 for last hit and 75 for those nearby and 0 globally. And ofc no XP. This may even result in a bot lane v bot lane instead of top lane v bot lane. If you have noticed in League, the map is the same as ours but its still bot v bot and top v top. When late game arrives the bot that doesn’t have the red buff rotates to top and shoves lane.

But I mean we can also drastically decrease the early game power of WP carries and add a WP ratio to ranged heroes on their AA’s so it becomes worth taking a whole wave of CS rather than taking ambient on the healing treant with your jungler. Melees can never carry a match, they can do well but it doesn’t mean they can carry.

I wish SEMC kept the true VG formula from 3v3 and build on top of it, i.e.
-all 3 carries fight for the lane and CS
-jungler decides if he will stay in his jungle, invade or pressure one of the 3 lanes
-support decides the lane to help/pressure or if he will rotate/invade with the jungler

Right now it’s as you, all of us and the pros describe it - jungle, wave clear while passing by and again in the jungle. No real laning phase. In 3vs3 we had a unique formula with unique key decisions where to be, in 5vs5 there are no such key decisions, it’s only one way to do the things.