The New Petal...is Insane BUT

She needs a nerf. Asap. Just one. Her combustion seeds need to not spawn so quickly after the initial explosion or have a longer explosion delay.

Short and to the point.

In some cases the joystick controls make her ult way easier to manage, as glitchy as they are atm. She was already super strong on some teams right before that, also.

No nerf, barely anybody plays her but she is way better than Taka atm.

I don’t know why, but when reading this I imagined someone sitting at a table of some fine restaurant ordering nerfs of heroes. 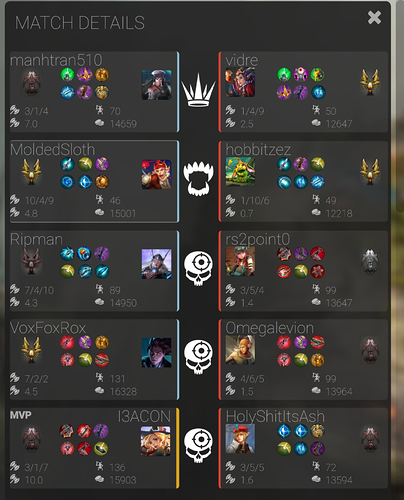 That’s part of the problem.

TL:DR:
Before, her ult would walk up to you while exploding and a seed would never spawn directly under you, giving you time to dodge both the ult and the munion seed dmg. Now that she can target the space you’re on directly, pushing to, or retreating to, you have much less warning time to dodge her ult, but you also have little time to dodge her seed explosion if her ult hits you directly. That’s a dps increase to her ult that isn’t even relevant to any specific stat buffs. It’s a buff based on the mechanics of her new ult.

Full Thoughts:
Now that she can target her ult on you instantly without having to auto attack first, there’s less warning that it’s coming. That you have no idea where she’s going to ult to if she isn’t attacking you makes it unnecessarily hard to dodge dmg from her ult, which would also be fine if it wasn’t 3 charges of explosive damage.

The next issue is her ult spawns another seed, so not only are you taking damage from her ult, if she places her ult directly on top of you, you are also potentially taking damage from the seed with little reaction time in between the two. This makes petal now even more deadly to any stationary or casting hero for no reason other than you’re almost always going to take a double pounding from her ult unless you are currently mobile as she’s ulting or have extraordinary reaction speeds.

She is now one of the best heroes for taking down almost any skillshot spellcaster, with the right build.

As a solution, I propose some kind of short warning animation showing where her seed is going to travel, or a more visually choreographing wind up of her munion explosion. The former would be fair because the seed still splash damages, so if an enemy doesn’t get away in time, they’re still getting hit in an aoe, and the latter would be fair based on simply giving people a heads up that a seed is coming, even if they don’t know exactly where.

I can’t honestly base the requirement of nerfing on how many people play her. Then again I tried stating multiple times how OP Reza has been long before the current meta, and now that they tweaked some stats and added a short move speed boost, which don’t change the core mechanics of how to best play him, he’s suddenly someone to stress or pick to a more widely noticeable population.

I used to play Petal when she was at 65% win rate lol xD She’s now at 49.9%, so obviously I’m going to disagree and say she needs to be BUFFED!

Bruh I realize this now so I’m gonna hop on this “discovery” in some cas matches, I’ll be sure report my ranked matches with Patel in the Salt Mine. Jokes aside, this actually a pretty important observation you have made. I’m pretty sure you’re gonna need more people playing Petal though to actually determine if this is OP or not because Petal right now feels like a new hero for many people, most likely. She’s been here but with a kit so versatile and interesting it gives the Patel player and the enemy to ponder over what could happen next. And tbh we need a good mage counter and she is one. WIth the conditions of assassins right now I’d rather have this remain in the game until it becomes to potent. Leaving a Celeste cornered after taking 700 damage from your minion explosion and then being scared of stepping onto the seed that results in 400-500 damage is just an amazing thought to be had.

On Reza though, believe it or not I used to read the forums all the time it was interesting to just hover and watch people, yeah sorta creepy and all but like I was a T7 player I don’t think I could have had many things to say. But that aside your guide about Reza was actually super enlightening or at least I was hoping players would be enlightened but nah and now they suffer. Your problem was though that you didn’t want boots. My build at the time was SG AS CW and Journey boots. Due to my god tier T7 skills I was able to push through to T9 Gold with him and Baptiste, latter continued to be my main until I reached VG Silver in which I had to play him as a support mage hero and sometimes I did get my Taka pick mind you SC sucked atm and would go 20/4/6 up in VGS because of my secret burst build (which did not translate well to 5v5 haha goddamn gold is such an expensive thing I’ve only heard carries are able to have, ridiculous isn’t it? Well that’s my 5 dimes and 2 quarters on everything you had to say even though the second paragraph is more off topic.

TLDR: You only wish there was a TLDR but I’ll tell you first paragraph is the important one 2nd doesnt matter as much.

49.9% she needs nothing if that’s the case that is so close to 50% the Pinnacle of balance that it can be attributed to a mistake playing.

Wouldn’t it be funny if the Petal players playing her right now are misplaying her and still maintaining a 49.9% WR. What if someone spent time developing and nurturing her as if she was their own child? What if the person decided to spread this news to everyone and Patel got a 70% WR? Hmm

Agreed on needing more people to play her. A good petal has some painful cornering potential now, in terms of strats like forcing the enemy’s direction by placing seeds in their retreat direction. Her vision potential has also been increased drastically, because you can just send a munion somewhere without having to actually signal you’re even concerned about checking there. And the seed has radius.

No other hero can do that, and it comes in handy for catching enemies hiding in bushes nearby off guard or simply gaining vision on an area without alerting enemies to your strategy easily. She’s a good mage counter with the skillshot block alone but directional ults really upped the ante for her mage killing potential.

As for Reza: lol i had hoped that players would be enlightened too but hey, didn’t happen. And I’m honestly not that invested in enlightening anyway. Just do it when I feel like. But yeah I’m still anti boots on Reza, lol. Unless they dramatically increase his troublemaker cooldown or nerf clockwork, I can’t see boots being necessary on him with how often he can dash late game, and they already increased troublemaker range.

So sweet, that was. But anyway, hopefully you found something by useful in my guide. I personally suck at ranking up lol. I can’t bother to play enough games seriously. No interruptions, etc.

But Petal isn’t really mage counter. She’s counter picked by mages because they are good into her in 3v3 and she’s not picked ever in 5v5 because her kit isn’t at all made for 5v5.

She’s seriously underpowered her whole kit needs a rework to make her relevant again. She has a reasonable win rate right now because she’s a counter pick to specific hero’s,’but if your locking her in first prepare for a rough ride as you’ll be faced with dive heavy comps ready to close that gap between you and her.

everyone in 3v3. Now that it’s 5v5 her munions die too easily and when they die it takes way too long to regeneratevthem. Plus the long cooldown on her hop is painful in 5v5 I think because there’s so many more opportunities where the repositioning is desireable.

Other than that she is still pretty good.

In 3v3 she has obvious counters, sure she is good into many of the meta which is why she’s a counter pick. But you’ll be toasted by Koshka, Ozo, reza, bf etc basically any hero with the ability to close the gap between her and them and who can apply burst DMG.

Having said that I find her annoying because she counters my girl CP jungle Skye quite well.

Dude… that’s because she was heavily nerfed.

I’m well aware which is why im suggesting to OP that’s she’s underpowered.

Problem with petal is she goes from being OP to underpowered In a flash, they struggle to balance her given the nature of her kit (can’t think of another hero whose had as many changes to their abilites). IMO she’s always going to be potato in 5v5 because she’s overly reliant on her minions, with the amount of DPS available late game they simply get blown up.