People IMO don’t tilt as hard against an ally who is 1-4 but has the most damage done to heroes.

They don’t tilt as much when they are given end of match awards for their contributions even if they lost.

Conversely they don’t think they did as well as they thought when they see their team fight damage is really low, which helps them realize they weren’t present at team fights enough.

They don’t tilt as hard when the guy on their team who they think sucks, actually has double their damage.

When you have data, and are rewarded for good play, with either recognition by design (end of match trophies)or just seeing your raw numbers, it helps ease anger and frustration.

TLDR: It lets people really see how they’re stacking up, and often they’ll find themselves not as good as they thought, and others not as bad, which lowers toxicity. It also quite often can allow a losing team member or two, to feel less crappy about the loss, by seeing their stats out pace even the best player on the winning team.

I have an old post on the OG Forum about this that explains ever further. Gonna dig it up

My starred thread on the old forum:

Let’s talk about the end game screen and what it registers.

We know how everyone behaved and performed. Wether or not they tried to help etc.

However the stats shown can give a very wrong image of performance.

A carry with kda like 2/6/12 could be seen as a failure. If his jungler had 10/4/0 stats we would consider the jungler the better player.

But what if the carry has done 70% of the team damage and died while performing admirably and the jungler just last hit the enemies at low health taking less risk. Dealing only 20% damage.

Part of the toxicity in game is because we do not see or understand in game performance well enough to tell if someone is doing well in spite of death.

We need kill participation as a kill recap. Just show us how people die and who did the damage.

This will lower toxicity a lot.

Post game screens offer no positive information. Arena of Valor and other mobas grade players by their performance. The game even highlights what the top performance of a player was.

Killer (player has dealt the most finishing blows)

Unstoppable Tank (player has survived this % of damage (without dying))

All of these would bring positivity to the game and the players. It also offers creativity in how to name and praise performance. It would also bring in game recognition for captains

Forthflowing from this we could have a caller call out Epic Save!!! When an Ardan vanguards an Ally about to die.

This is a great way to curb toxicity by bringing positivity through game actions and recognizing those actions in the post game screen too.

And before telling me they don’t have time for this or this is too hard, they wasted time on taunts! They spend time to increase toxicity. Now with these suggestions they can bring positivity and it would probably not even take that much effort in the grant scheme of things.

While this is a suggestion thread please keep it in General so it gets seen.
Jan 16, 2018

People eating more death than kills don’t put out more damage. It’s directly related to positive kill counts. Look through your games. Everyone with negatives deaths also deal lower damage. There might be an anomaly here and there but it’s certainly not the norm.

Untrue. I see a lot of people with good kda and barely any damage dealt.

Not sometimes but all the time!

A carry can have 70k damage and negative kda. Doing his damage in a teamfight and tanks not taking the hits. Tanks will last hit all of the low hp enemies and have decent kda but low damage.

People without kills and assists usually are bad though

Not always. In low tiers maybe. But you always have exceptions, and those can be quite unfair at times.

What if you have someone who literally only shows up to KS fights? A bit extreme perhaps, but I see it happen a surprising amount of the time. They don’t do much damage in the long run because they don’t help their team, and their team loses even though “I carried so hard”.

Likewise, someone might actually be playing very well, but they keep being abandoned by their teammates - or their teammate’s only ever clean up fights. Meaning someone can have a crappy scoreline and have every single kill cleaned up by an “ally”. Yes, this does happen.

Untrue. I see a lot of people with good kda and barely any damage dealt.

Show me the games via VG pro screen shots.

Not always. In low tiers maybe. But you always have exceptions, and those can be quite unfair at times.

It terms of combat alone kda is a good mark of performance. Of course it’s a different story when it comes to the objective game.

On average yes, in more than enough cases, no. You obviously haven’t played with enough teammates who abandon you in teamfights, or basically show up to KS/don’t rotate.

Dude, look through your own VG pro games. The vast majority of people with higher damage will have higher kills and assists. The more damage you do, the higher it’s naturally going to be. There’s a direct correlation. Seriously just pull your last 10 games. It makes no logical sense that some with lower kills and assists will do more damage…because at worst it correlates to assists.

People going 0/4/0 will never have higher damage than someone that goes 1/0/0.

Of course, that’s just for combat. Quite frankly, someone who goes 0/4/0, but keeps all their turrets does a far greater job in the over game than some who goes 15/0/0 but loses all of them.

However, that’s has to do with the disconnect between the pvp aspect and the objective game, which quite frankly I agree there is a huge disconnect with in 5v5.

This isn’t about those who have low assists. If you’re doing damage you get the assists. However people will rage at an ally who is 2/6/10 because people don’t give a shit about assists. Damage is a much clearer indication, which is why people who use VG pro and other API’s knwo whats up. Just get those features in the game.

Assists definitely factor into combat performance. All kills equate to is getting the last hit. Quite frankly, assists are a better metric of team participation than kills alone, because all kills show is how good you are at last hitting.

Nevertheless, there is a direct correlation of KDA to combat performance. Even if Semc decides to break up metrics onto sub categories those categories will still follow the KDA metric. Seriously, just look at your vgpro games yourself and do the math yourself and compare it to everyone’s KDA.

I do agree that they should show an objective damage metric though.

You know for the people who unlike you aren’t debating VG all day, or checking VG pro and doing math, and just play the game and tilt occasionally. I think it goes without saying this would improve the game at a minimum, and also likely help some players feel better after a hard game.

I think it goes without saying this would improve the game at a minimum, and also likely help some players feel better after a hard game.

In the case of metrics like damage, it wouldn’t. Like I said, there is a direct correlation between damage and KDA. You can see damage and healing via vgpro already. People with better KDA have higher attributing stats as well.

Sure, it could be detailed out better. However, it won’t make people feel any better than it does now, because quite frankly people with lower KDA will also have lower attributing stats.

KDA is a pretty solid metric for overall combat performance. Only thing Semc is really missing is individual objective damage, which, with KDA, would paint a more insightful overall picture, besides simply combat.

Ok so let’s try this very simple question. Why do you go to the API sites?

Usually to figure out which heroes or roles I do better with. Sometimes to look at the profiles of players I thought were really good or bad.

You see no way someone else gaining that exact knowledge in-game could help lower their toxic behaviors?

My own thread carrying with bad kda is one 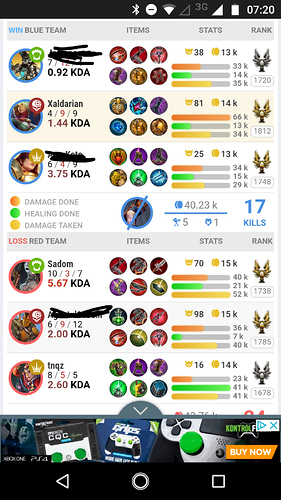 Also, your kills and assists were similar to your grace, and she was a hybrid roam.

Go look at my thread which I mentioned. That grace was horrible…

Kda means jackshit! There are people who will never engage in a teamfight so they won’t ever die.

Kda is the worst possible meassurement of skill you could take and look at solely.

Kill participation is a much more valuable attribute combined with damage done. 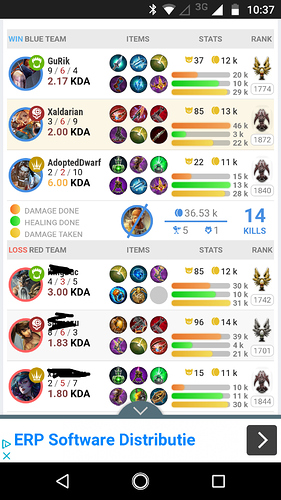