The absence of lore just sank in

I was going through some old threads, and I came across a recording of (I think) SugarVenom reading Discord’s run of Tony’s lore. In the beginning she talks about how they had been building into the Rise with the lore for many heroes and while I was listening it hit me just how much there was to the lore. Where we left off was RIGHT on the verge of something massive, and it hurts to think that we might not ever get to know what it was.

Honestly if the game gains more money again, i hope and beg that she is given full time again

I wish SEMC had data on how many players actually clicked on the lore links so we could see if it was actually important to players.

i wouldnt be surprised if semc had this. its not that hard to do. but i bet the numbers arent in favour for the lore.

I wish SEMC had data on how many players actually clicked on the lore links so we could see if it was actually important to players.

I don’t think that’s a good way of measuring how important the lore has been to VG, though I’m sure that it’s exactly what SEMC used to justify abandoning it.

I think that the lore has been the thread that wove Vainglory into a cohesive whole: it explained why each of VG’s heroes exist, what the fight is about, etc. – even why the Halcyon Fold looks like it does. Without SugarVenom’s stories, VG’s heroes are going to become more generic. Compare:

While probably exaggerated a bit (I’m fairly sure they’ll include some sort of description/“story” of any new heroes), I find it difficult to imagine that we’re going to feel any connection to new characters who don’t fit into the stories that underlie the game.

While probably exaggerated a bit […]

Nope, the comparison couldn’t be more accurate. That’s exactly how much we know about Anka.
And filling those blanks with generic “bla” for new heroes is not going to cut it, either, as far as those people who cared in the first place are concerned.

That’s exactly how much we know about Anka.

Damn, didn’t even think about Anka when I wrote that. You’re right: the era of lore-less characters is already upon us.

Look at their history. This game doesn’t need a forum let’s abandon it.

Player base revolts and creates a community driven forum which does very well.

Lore will be the same…

I wouldn’t mind if the Lores are gone. Though vivid description don’t appeal to me very much, I hate hero descriptions when it’s generic and dumb (like they are now). You pretty much can say: “he’s a fun and energetic boy who never miss a beat” or “he’s a romantic swordman who’s not discrete about being a fuccboi”. Can we stop with that?

Lore should be able to be read in game (I think that’s why the Lore failed to be popular) and they need to be short so I can read it in a short sitting before my match.
If they decided to shortens the Lore, I hope it will be a fast read (200-300 words max) or just editor cuts of important moments in their Lore, for ex. Celeste’s:

“As she entered the hall, was gloomy and with great pressure, stood and laughing the Storm Queen. The atmosphere, her mother’s death, the queen’s presence and the thrill of another gamble weighted heavy on her consciousness, as she walked towards her deserved throne…bla bla…
The queen is dead…blah…
Destiny was met… dot…dot
It was the Star Queen who, no longer tethered or a victim, risen to power as she shall be victorious. (She also loves peanut butter btw).”

Just include a quote from the original Lore that sums up the hero the best, anything from the horrible, cringy description we have now.

Not all Heroes will have original Lore…

Anka will sure need some, and so will Silvernail

I really wanted Anka’s lore especially since I am sure she is the assassin linked with Grace from Grace’s lore (The waifu she replaced). I want lore-based Anka memes

You can make them anyway, like Anka was the final straw for SugarVenom she was just terrible it made her quit. 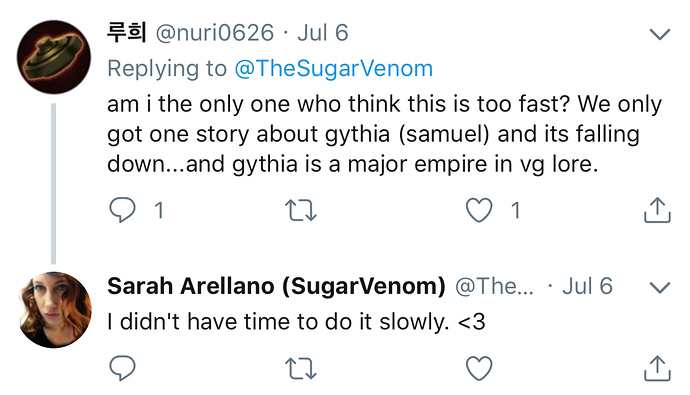 She was absolutely salty, and rightly so. Did you hear how she talked about her world? It seems like the breathed the feckin lore man. Passion like that can’t just be laid off. I wouldn’t be surprised if she was still writing it in her spare time.

Guess we gotta make our own lore guys.
Silvertail is a used cars salesman who hunts rabbits for his hobby. Who’s with me.

She once said that she does it.

Never been one deeply for lore simply because reading in on the website instead of in game annoyed me, including the absence of it in events or the gane in any meaningful way, but @hazeleyes your comment just made me realize how cheapening it is to a committed vg player not to have some kind of explanation in the first place.

I often compare the quality of vg to Overwatch in my mind and it woukd disgust me to see the same thing happen with that game’s new heroes so…yeah.

Can I just ask, why compare vg to overwatch in quality? That’s an interesting comparison you have