» Appearance- A mix of the Grudge (look it up) and Annabelle look. i couldn’t find any creepy doll pics that resembled my idea. IF U DONT KNOW THE REFERENCE, imagine a broken porcelain doll

» Basic Attacks- She attacks using her cracked and chipped porcelain doll hands, uses a scrape-ing motion at the foe.

» Infinite Reboot (Perk)- She breaks down into a pile of dust .___. When she comes back to life, a banshee like ghost arises from the dust while being covered all over into her doll porcelain cracked broken skin.

» Protocol Detection (A)- A broken baby doll crawls fast along the select area. And if it hits something, Alpha flings her doll body (like a zombie running after someone) and scratches from the front of her to the sides of her.

» Termination Call ©- Alpha brakes out of her doll body only to release a creepy ghost that is screaming with a shockwave around her like taka T3 and gradually slows down. When the ghost explodes into smoke, it leaves a dust mound on the floor in which her perk happens (read perk).

» Recall- Alpha violently shakes as if she’s possessed by a ghost.

» Walking Animation - Demon lady type of crawl such as pic 2

Pic 1 ghost inside her 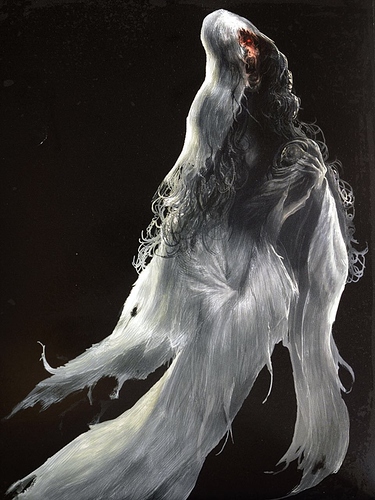 3 Likes
Have you ever wondered why you crafted or bought some skins? Do you ever want a refund? What skins are you anticipating for?
MacAulay June 3, 2018, 7:49pm #2

GIVE ME. I really want this.