I really want to achieve tier 6 this season, but with the new update, hero, items and balance changes I don’t know who are the best heroes (apart from Krul)

Everyone that can heal, has fortified health or a barrier is top meta. Including Krul. Krul is probably the best pick currently

wp grace is pretty amazing, wp kestrel is also godly if you practice her (weave your As with your autoattacks). samuel and lorelai are amazing cp laners for mid and top, and i think wp taka’s pretty good rn.
roams that are amaxing are lyra phinn ardan and adagio since thry can abuse the new items the most, also anyone who has lifesteal healing barriers or fort health (reim has a fort health cap though) also works well with capacitor plate

Yeah, I have realised that Kestrel wp is OP, I have won nearly all my games with her and have had a positive K.D. As for Taka, he is really OP if he is ahead in jungling and can snowball easily regardless of his build path. Thanks for the tips, I pretty much all of the heroes mentioned except Lyra, Phinn, Lorelai and Reim.

All of the captain heroes in any way are very strong too.

Any heroes that work with the new items, basically. I got to T6 with Grace in 3.3, I imagine she’s even better now with cap plate or the others.

Her barrier from A now speeds up allies if you are using capacitor plate.

My keyboard even learned this word combo in half a day. It is that OP lol…

That’s ridiculous, lol I would say Grace is permabanned for this patch, but then there’s also Kensei, Kinetic, Lyra, and Ardan + more who are so much worse…

Kinetic is not broken… Malene Lyra and Kensei are. So are Krul and probably rona Reim and Ozo too… And of course Grace.

Kinetic has a ton of counters…

Guys lets be honest, u can say whose meta rn cuz the patch was just released, but we can decide on which heros could be meta. Like Wp taka with his 8 second ult with full stacks and SpellSword.

Just wanted to say that

She does (as with most heroes), but she also has crazy range and damage. Paired with any or multiple of the new or reworked defense/damage items she’s oppressive in any position. (but yeah all those heroes you mentioned are pretty op) 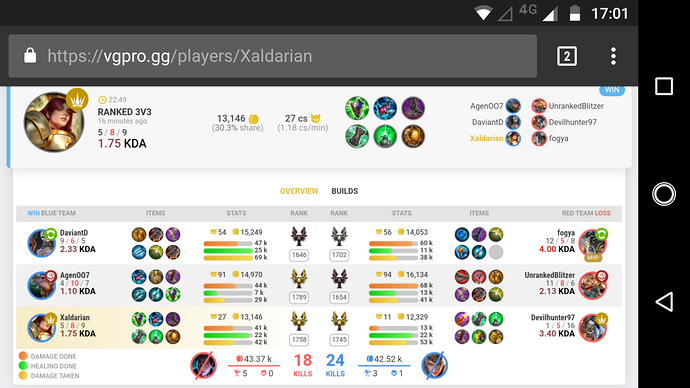 Grace carrying the match as captain…
Look at the stats…

Why is everyone building Capacitor Plate on every hero

That Skaarf I don’t know what he was doing or thinking.

Well a lot of hero’s have some kind of barrier or heal… Christ even if they don’t is their an item with shield/armour and health which rivals it? Krul, Ozo - wozers!!!

Personal feeling is Adagio was super strong top lane, but previously suffered late game. Build capacitor plate on him now and you can heal allies for 500/600 burs which is insane.

He has to be in the meta, along with Phinn whose speed boost along with new items makes him a bloody nightmare.

BTW, every tracer I played against lost, so she is definitely not in the meta. Although I think Varya could shine… She’s not good with Capacitor Plate but she’s like a CP Vox, with a lot of dps(compared to Vox) so I think she might shine against the one or another squishy

Literally the best item in the game rn lol

Especially overpowered on Ringo, its madness

Dude she has been out for a little bit over a day no one has mastered her yet. I was watching Excoundrel’s new vid on her and the entire time I was chanting ULT ULT ULT. Clearly players are still learning her and plus the meta is different in all tiers, considering her high range and good ramping damage as WP and insane burst as CP I don’t see her not being played at my tier in a good amount of time. Try not to make conclusions of your own matches either as a note because many people did that to Kensei, I myself included, until I just let him slip through draft and he ended up going something like 19/5/8 and needed a giant CC chain so I could burst him down.
Varya has been meta for a couple of patches now…lol. She hasn’t been shining she has been dominating/stopping domination. A late game Varya ruined Samuel last patch and he was OP. Also being the only thing stopping the Skaarf and Celeste hypercarry two patches ago when they were super strong.