Lotsa positivity this time around

Everyone seems to be in high spirits for the game with the recent news. Let’s hope SEMC not only does everything smoothly, but also keeps it up for patches to come. If they can bring back VG’s prior charm while also releasing as much content as they have been, this might be a big comeback for VG! Let’s also hope more technical/MM issues are resolved (Such as returning to a game after a call which they finally addressed) and that the PC port is a smooth transition. If SEMC can pull this off we can also potentially see the return of a competitive scene if the game garners more players due to all these quality changes.

Other than the game modes they neat.

Also, where are my balance notes? I want theeeeeeeeeem!!!

I hate his character design (It’s so generic and stock ughhhhh), I am irritated by him just having better versions of current characters abilities/play styles (CP Vox and Idris ): ) and I despise the mechanics creep for ranged characters which further spells the death of melee damage dealers.

You realise that Magnus is the opposite to a melee counter, dont you?

A (You might not even need to if they get bounced)
B
0.9 second stun, if they block the first they get hit by the second. Super easy to hit on anyone who has to approach you from in front, AKA pretty much everyone except Anka.

Also Melees are by far easier to use for bounces and to bounce to, so he’ll deal more damage to them
Also Peel is much stronger than engage in general right now (Only really changes when Fort becomes meta)
Also he has 12 range, making him exceedingly hard to engage onto.

Remember that Celeste has 9, (10 with supernova) range and a stun that’s much harder to hit on a mobile melee character compared to a Chakram. She didn’t have major troubles with Melees even with her low mobility, as long as she has a Captain by her side.

Magnus himself isn’t specifically a hard melee counter but almost all ranged damage dealers are ‘melee counters’ in this game, so that doesn’t really help. As more mechanics creep into the kits of ranged characters, melee damage characters need to be exceedingly overloaded to be viable.
So just Anka.
She’s the only survivor.

Yeah I’m so excited for the update!
I can finally press the home button like an idiot and not lose the game

can’t wait to play one for all

The patch or even the patch notes isn’t even out yet.
People need to stop crying whenever they see a new hero :(.
And even if Magnus does turn out to be broken they would nerf him.

Anka, reza, idris, kensei, inara, ozo, glaive, BF, rona, krul… he has no mobility at all, and a cc easy to dodge, once you reach him its gg for him. Most ranged heroes are harder to kill than him. Also, he doesnt have the massive damage Celeste has.

and a cc easy to dodge

Celeste’s is pretty much objectively easier to dodge, yet she does fine.

Also, he doesn’t have the massive damage Celeste has

Celeste’s is pretty much objectively easier to dodge, yet she does fine.

I havent said the opposite though.

You haven’t even played against it yet

I think he’ll be fun to play and okay to play against since he has no mobility unlike cancerous melees like anka.

So, Magnus has
Higher range (+ bounces)
Harder to dodge CC
What most definitely looks like a lot of damage (I don’t think it’s notably lower than Celeste’s. Maybe higher in teamfights.)
Instant travel AAs
than Celeste

Celeste does fine into melees, countering some of them and being countered by some, but only around three are a threat in a teamfight (Anka, WP Idris and Reza). I don’t see why Magnus wouldn’t be the same story, except even better.

Opinions feel so neutral that I might reinstall again

Why am I seeing complaints against a hero that isnt even out. The patch notes also arent out so we dont know if the his counters were buffed etc.

That can bodyblocked and doesnt deal near as much damage.

What most definitely looks like a lot of damage

Thats with numbers, not kit, and without even trying him i cant judge.

Only when marked. It also consumes the mark, cripping his damage.

Celeste does fine into melees, countering some of them and being countered by some,

Celeste plays horribly against any melee that can reach her.

, but only around three are a threat in a teamfight

Thats becasue she has 4 other players protecting her, do the same to dive her then. Its hard because of her team, not her kit.

What most definitely looks like a lot of damage (I don’t think it’s notably lower than Celeste’s. Maybe higher in teamfights.)

Its kinda hard to compare the damage between them.
Celeste normal A’s do like half the damage but can be used thrice in the same time( also I think supernovas do about the same but I might be wrong there)

Samuel’s auto attacks are almost instant too and so are Malene double attacks when she ults so it kinda counts?
Also his range is shorter than Varya/Samuel and every sniper.

Yeah he does somethings better than others but other heroes outperform him in certain areas too.

And again he’s not even out yet

Its really sad when people complain about new heroes when they’re not even out yet especially when vainglory has one of the better balancing teams.

vainglory has one of the better balancing teams. 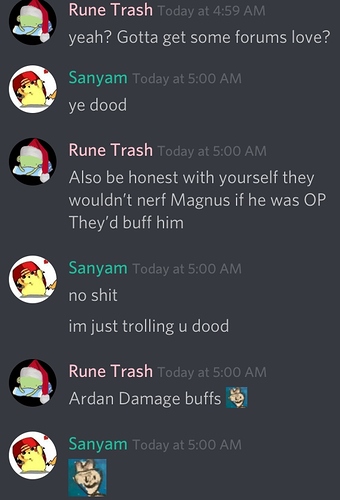 I suppose that invalidates all the points I made