Future of VG according to SEMC article

Im not tech savy when it comes to posting the article text here onto to post (someone teach me pls) but it has some cool stuff in it that outlines what SEMC is trying to accomplish.

Honestly Idk what to think… It just seems like a way to expand the game among multiple ports and It doesnt address ways to bring in new players and keep the old.

Ill still keep on playing AoV and closely watch VG until it starts to head in the direction I think it needs to go in.

Also not to derail my own thread but instead of the horrible lootboxes that comes with a newly released skin, why cant they do a 3500 direct purchase for the skin and a test your luck on a loot box type of deal. Smh or atleast tie it to a money to ice purchase.

also i saw this on another article from @Brian that he posted on reddit. 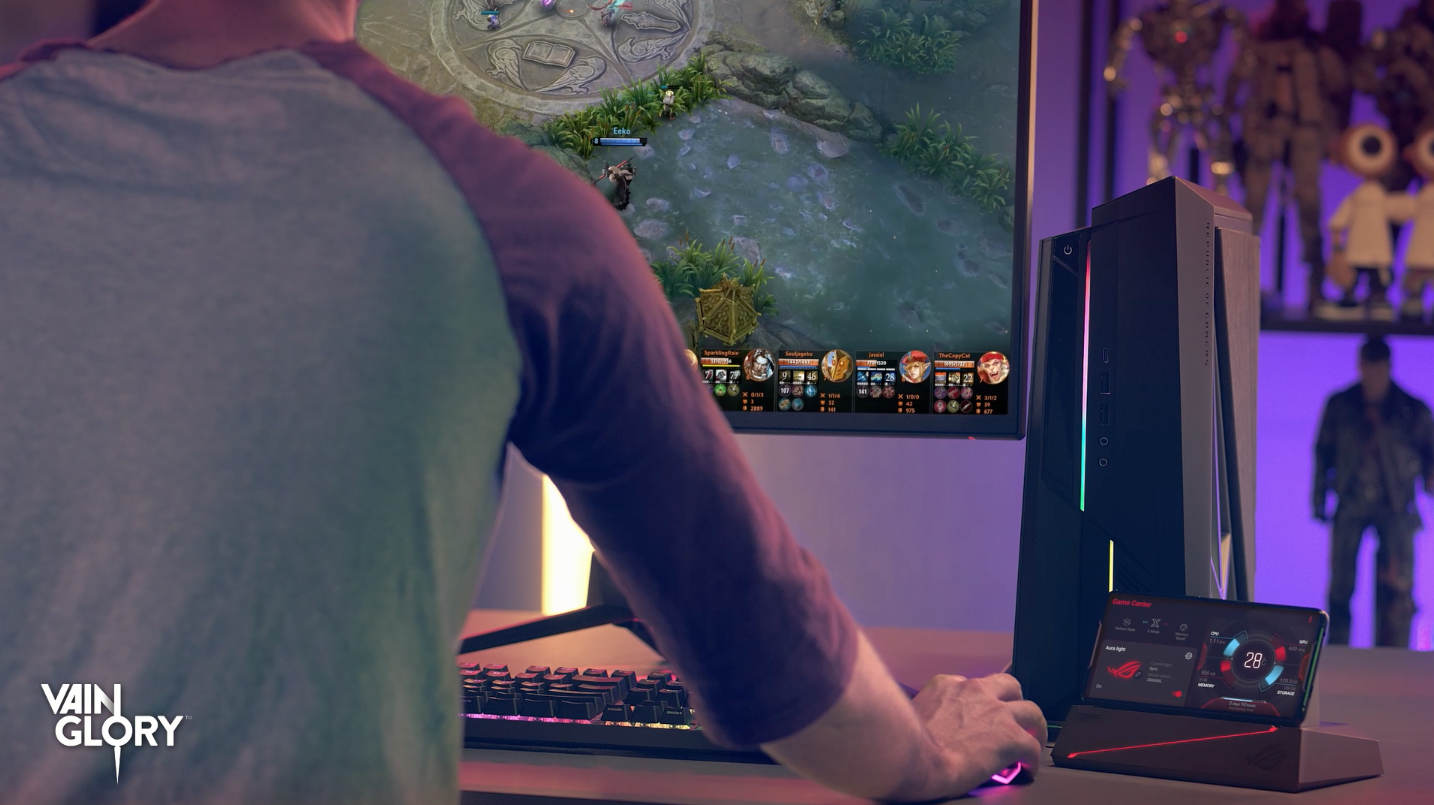 First of all, we’re excited today to announce four pretty big things for us : Our strategic partnership with NetEase for China Our upcoming PC and Mac Vainglory. Get the “Vox on Ice” skin free by participating in the PC alpha [here] Our...

EDIT - yeah, just post the hyperlink without putting an optional title - I think that’s what you mean

I read that article as a lot of promises that they’re going to have a very hard time keeping.

I guess we’ll see – I do hope they turn things around, but I really feel like that’s not possible without a change of leadership as well as replacement of some of the community-facing parts of the company.

Cross platform is a great asset to have for every game but it won’t get vainglory out of the hole its sinking in. Veteran players are leaving at an alarming rate so something needs to be done (or should have been done months ago actually) to regain the trust of the community. Focus on quality of life changes, make the community feel that they have a voice, acknowledge the complaints because nothing’s worse than being left out in the dark. They also need to come out with another strategy to attract new players because what they’re doing right now is clearly not working, i feel like advanturing into the Asian market is a bad move because Tencent already has that market dominated.

Interestingly, VG’s strongest market is SEA, at least based on the available evidence. And it’s where the game was initially launched, so it’s not like it’s a new market for them.

I personally play VG wherever a PC is present- at home. For a mobile game, it’s not the most “mobile-friendly” experience.

For one, it’s picky on the internet connection. Public wi-fi can’t promise a smooth experience, and using data while playing will melt my battery (physically as well) Where can I find a stable internet connection? At home. Touch controls also require a proper surface, a surface that sits well at home. It can be much more difficult to use touch controls in a public environment than joystick. The most mobile VG gets for me is the ability to play within a 5-meter radius within my internet router lol.

So IMO, cross-platform play is a step in the right direction in growing the playerbase because its own definition of “mobile” is kind of niche. However, the out-of-game experience still isn’t polished yet.

TLDR - Cross-platform is good in growing the playerbase cuz other titles do better on the “mobile” aspect. However, VG’s out-of-game experience is still poopoo.

original blitz is what most suitable for mobile platform. it’s fast and full of action. easy pick and play. too bad it gets destroyed by talents…

They’re going for the ‘jack of all trades, master of none’

Yeah, it all sounds good and shit, but in the end it doesn’t matter if the game is available for android/iOS, pc, console, toaster, calculator and potato.
Nobody will play their game if it isn’t appealing or fun to play at all. Fix the game, then do that, otherwise pc vainglory will be the moba perfected for your desktop’s recycle bin.

Honestly if semc thinks they will be first to have their game on all platforms then I’m sincerely sorry to say but there is this other game called warframe that is already on PC Xbox Ps and recently launched on even switch. The only reason they aren’t on the phone is cause of hardware limitations. Other than that, if they think by releasing the game on multiple platforms can save them then sure let’s hope so. Any change is better than no change .

Community. Ability to work closely with a community to build it.

LOL. This was in their road map. I couldnt stop laughing at this. Funny how they say this yet they dont give a shit about the community. People is complaining about the state if the game, bugs, everything and we get hats. Amazing respect towards the community. Only promises they never keep.

True, but back then there was no AOV.

They should stop and realise the problem is not the platform, but the game/gameplay itself. They should fix that and then look to another platforms… ffs, they even can’t fix old as time bugs and go for another platforms. They can’t update the game in a timely manner, but wan’t to develop for 4+ platforms. I just can’t see their vision happening, most likely they will fail and that’s all.

SEMC seems to have lost their mission… “MOBA perfected for touch”… not for clicking and hot/short-keys. Starcraft AoS did that. Warcraft III DotA did that. League does that. They’re fun. It works. What really turned me on to VG was how great it was for a mobile game. As I’ve gotten older (I played the OG MOBAS, AoS and DOTA from 02-07), I no longer have the need for a PC or gaming laptop. They’re too expensieve and I don’t really care for them. When I heard MOBAs were on the mobile scene, I had to check it out. VG is by far (still) the very best.

I think they need to stop worrying about expanding. Use these resources to advertise (take notes from Clash of Clans), throw a little humor in it, make guild wars a thing, reward win streaks, cap the number of heroes at 50, rework and buff/nerf heroes each season based on usage rate, add more events.

The game is GREAT. But it’s being ignored as it’s mission continues to be lost.

My 2 cents. I’ve only been playing the game a few months (Gold T9 in both 3v3 and 5v5 - very close to t10). But having read up on past versions and the history of the game (as I’ve become so fascinated) and this article, that’s me sense of the matter.

Ha they think VG has a future. Game hasn’t been updated in near two months and they think they’ll make it to the END of 2019 lmao. They lucky if they make summer.

I think they need to stop worrying about expanding

As a company that has bills to pay and employee salaries to attend to, they literally cannot afford to stop worrying about expanding.

They’re a for-profit firm. Marketing the game to as many as people as possible helps them turn that profit. The mobile gaming market is reasonably large relative to the console and PC scene (actually, it’s fucking huge), but PC and console will be relevant as gaming platforms for many years to come as long as the laws of thermodynamics work to restrict modern smartphones and tablets to a general performance level that is below that of a console’s or PC’s.

SEMC would be dumb in 2018 to not attempt even a modicum of penetration into these markets.

On the skill tiers topic (not that much to you, generally): Before 5vs5 release I was t8 silver, slowly climbing every season. After 5vs5 release so many players left that I for no time reached t9 gold and t10 bronze mid (2500 elo). In no way I was way stronger, actually I was quite good back then even if t8 silver.

On the direct topic: if you search for serious MOBA experience and PC like one (dota, dota 2, lol, hots, etc) - there is no better mobile MOBA than vainglory, period. The player base is smaller, but there is no other MOBA that got the same /serious/ approach. A lot to like and love in that game, some of us are a little bit upset as in the past the game had quite a uniqueness with the 3vs3 mode that was really, really polished and filled with love to the details. Still, we all respect and recognise the strong sides of the game even nowdays.

This is also a good point. Firstly they delayed the 3.8 with two weeks making it 1.5m period till update, their reasoning was bug fixes and then they needed to bugfix really fast that update + didn’t fix really anything… I think till now we all know that the real reasons where different. Now this update is 2m period, this is basically half the new content and meta changing/evolving + bug fixing that we normally experienced in the past with that game. Really sad, as it looks like they slow the development and do it with fast phase.

I 100% understand your point, and it makes sense. A lot of apps make a fair amount of profit however, as mobile platforms only. My point is that a lot more can still be done for this game on the mobile platform. I will say this, as I felt my first post was more negative than how I actually feel about the game:

I love Vainglory. As it is right now I really enjoy it. It’s better than I thought a MOBA could ever be on mobile. I also don’t think the game is dead or dieing at all. I find games all the time. I think the idea that the game is dead or dieing is generated from people who quit or who struggled and are looking back and complaining. This was also a shared opinion by Chuck from Tribe, when we were chatting the other day.

Rather than looking for all the flaws, we ought to, as a MOBA community in general, really appreciate what VG has done and has accomplished. I just feel this article is a reflection that they’re rushing to an expansion too soon.