Does cp Gwen need a buff?

Cp Gwen is a hero nobody sees in the fold anymore, probably because her Wp path is way better but it wasnt always this case. Cp Gwen was lowkey meta from 2.10-2.12 and wp Gwen was trash, 5v5 release changed everything. Gwen got her slow moved exclusively to Wp path and got few buffs too which made the cp path dead. Her early game is trash and she needs 3 items to even come online, her objective damage is pretty bad , where she used to excel was teamfights but even that is weak now. She needs a damage buff or some cc buff(Give B or ult stun cp ratios) so that she can survive ganks or atleast reward those who survive till late game to use her damage

I think SEMC should give her A a BASE slow of 15% then reduce the scaling for the slow with Bonus WP, + more damage.

Might be good without making her op. The reason I think slow on her A is a problem because it is basically a teamwide slow every 3 seconds late game which is why buffing her single target cc(Ult) or speed boost with B might be good without nerfing it every other patch

Not all heroes need to have both paths viable, if not I want wp Celeste and Samuel to be meta.

I am not forcing cp Gwen to become a thing, she was viable a few patches ago. Cp Gwen was played in pro matches , was wp Celeste ever possible?

Sam doesn’t have enough cc pre level 6, idris has no cc and yet they are midlaners. Cc is not a criteria for playing midlane, she had good gank escape potential, good wave clear and good aoe with some cc after lvl6 which resembles most cp mid lane mages right now

No, but Samuel yes. The reason why I don’t want cp Gwen to be a thing is because it’s extremely boring to play with and against her.

True. She is boring to play against and is easy mode for the user but still our individual preferences should not dictate the meta. Personally I would be happy if taka was deleted from the game but that doesn’t mean he needs to be

But not all heroes need to be viable in all the paths, and a hero that is boring for both teams is not healthy of the game. Also, you can’t compare deleting a hero with not buffing a hero that already has a viable (even more than viable, very strong) path. 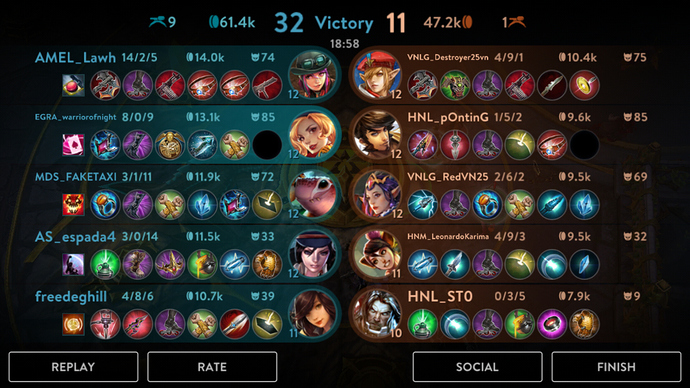 Boring is individual opinion. I find her fairly interesting and she helped me through the 2.9/2.10 madness. There is a fair portion of players who want to try out different paths which is why cp vox/Ringo/saw exist. Cp vox was nerfed to the ground and everyone wanted him back, why not gwen? Mages are usually the ones who don’t get used in other paths, every sniper has a functioning cp path

How was the damage output? There is no high damage cp item in that build and no pierce either.

They made cp Vox strong again because a lot of players asked for that, which is different with Gwen, the time this was asked in Reddit (if they should bring back cp Gwen) most players said no, that it’s the most boring hero to use (cp, not wp) and that is not healthy. Cp Ringo and Saw are no longer meta. Also, baptiste is mage and they are trying, why not Samuel?

Her CP side relies on spamming her A, she’s very difficult to farm with as a consequence and whilst her A did huge AEO DMG she’s a bit of a one trick pony.

If you were going to make her playable you’d need her basic attack or maybe her heroic perk to have a CP ratio. But then you’d need to seriously reduce her A CP ratios because she’d instantly become a monster.

The biggest problem I see with her CP path is tha her B does no DMG, doesn’t amplify anything etc. Can’t think of another laner who has an ability which doesn’t boost/apply DMG in some form.

Have you tried her CP? Maybe you could abuse a AS/SC/SF combo? But even then I still think your going to lack burst DMG (it’s a bit one shot, wait, one shot, wait) as things stand.

I have no problem with wp Samuel. The problem is how will his kit synergize with wp?

I tried her a few times and early game farming was the biggest problem. She needs 2 T3 items for the super fast wave clear with her A.

Her heroic perk also has a WP ratio of 30/40%, you’d need to give her a +100% minimum CP ratio IMO to make them comparable. This might make her a lot more interesting to play as you’d need to counter in her perk…

Can’t think of many hero’s where the heroic perk is as useless as a CP Gwens is (maybe WP Vox).

If SEMC wants they can make it work for any hero to have viable WP/CP effects. The best way would be to have different unlockable effects for skills with X amount of CP/WP ala idris. That way they will make a lot of diversity in the game, obviously making the balance even harder.