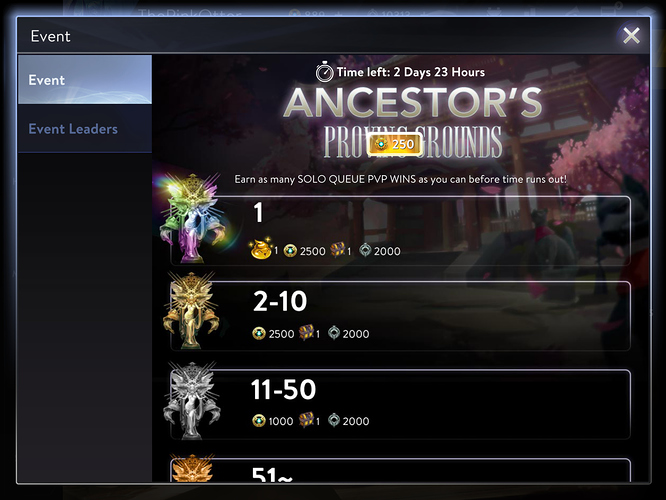 In case you were wondering where the golden poop emoji is…
There we go.

Also this event is the worst

On topic, this is possibly the worst event yet but what do we know

On topic, this is possibly the worst event yet but what do we know

Utterly agree. These “events” are so low effort on their part.

These “events” are so low effort on their part.

At first glance, it looks like they addressed a number of issues with the previous iteration (such as cheating and only the top 3 players receiving rewards). That counts as a step in the right direction, in my books.

Then I noticed the buy-in is ICE only. Oh well, not for me.

One thing I had to realize when HipsterSkaarf posted the thread asking for event ideas, though, is that it’s really damn difficult to come up with things that are not generic and make sense from a gameplay perspective.
I’d be most interested in stuff that ties into lore, so winning games as a team of Stormguard characters would be cool. But if everyone and his brother team up and lock in the same 3 characters, it gets old fast.
Same with objectives such as… no clue, offing Celeste with Merciless Pursuit - because history tends to repeat itself. Suddenly everyone locks in Catherine, in hopes of catching a Celeste.

That sort of thing could work as “achievements”, without a limited time window, and with such a wide variety to pick from, that you don’t have to worry about overly negative impacts on gameplay itself.

The whole notion of events seems difficult in a MOBA setting. As much as I’d love to see more (and more appealing ones).

This event is horrible lol, and you can only enter using ice hahaha. It’s a nope.

but there’s no “win without losing 3”… it’s just win as many as possible. which is fair.

i spot @Gatorrex is sitting at number 13 on the leader list.

people are just blitzing all the way to the top

but there’s no “win without losing 3”… it’s just win as many as possible. which is fair.

Eww… that’s just plain terrible. Slaving away for 48 hours straight, for a chance at a top 50 spot? Oh hell no.

Do away with ice buy-in, remove blueprint chest rewards for everyone, and you have a proper event which everyone will actually play. This is just ridiculous.

Meh, another event that I’m not even going to even bother entering. There are a hundred fan events that would work a lot better than any thing they’ve done so far but idk why they keep shooting themselves in the foot like this.

everyone can play what they like, losing doesnt feel devastating, you dont have to do everything to get the main price.

events that only really benefit 3 players are never going to be liked by the players. when i opened my app this morning and looked at the leaderboard, i already new i wouldnt get anything from it. this event gets a F. for not being an event at all.

Yeh dont bother wasting ur time on this event lel

The buy in is only ice ? can someone confirm that please, if true then good job on creating an event where 90% of the player base won’t bother taking part in.

Yep, 250 ICE to participate. You essentially buy a blueprint chest, because that’s what you get for participating. (And it’s the same price as a regular BP chest.)

Like all of these pay-to-enter events, I see no reason to participate. 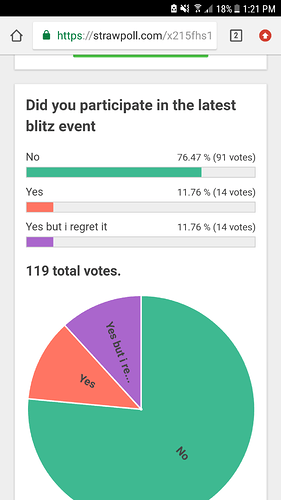 Better to do them rarely, but to be good than spam them like that…

Another event where the top prizes are exlusive. I would love an event where I get to participate in and actually have a chance. Not all of us have 8 hours to waste on Vainglory and even then only the top 50 get a reasonable award. I don’t even care about the buy ins but you’re not even guaranteed a good reward the BP chest is so BS. Watch when I get it I’m gonna get 2 rare skins I already got with some glory. Even though I don’t own a third of the skins in the game.

I would love an event where I get to participate in and actually have a chance.

This is exactly the problem with these events. The vast majority of the player base has no chance at all to get a prize. (And I am not including the stupid BP chest.) Why participate? Only in Backwards World SEMC’s world does it make sense to hold an event which actually discourages people from participating by (1) charging a non-trivial amount of currency to enter and (2) making it almost impossible to win anything.

They’d probably justify the 250 ICE entrance with the BP chest but that makes no sense. They should have made it so if you get at least 10 Wins then you get the BP chest. If you have anything below that then nothing. Could have easily made a decent event by making the entry 3k glory and 250 ICE. If i wanted to spend 250 ICE then I’d just buy the BP chest.

1)The event is ice only, OK.
2)I dont mind paying the ice but its an event where people with the most no of wins get highest rewards so in events like these TIME MATTERS. I got to know about the event now. Thats 5 hours late. Thats atleast 60 blitz games behind people who started 5 hours back as soon as the event was out(Idk how people have 100 wins in 5 hours).
The event feels so unfair. Its like others get a head start.
How hard is it to put an in game notification/ poster a few days ahead of the event starting so everyone knows about it and can get a fair start.
PS- Just read in game that the last event, people did cheat lmao.