As someone who mains Glaive for many years my eyes bleed upon seeing the recommended Glaive build. It consists of a Breaking Point and a Tension Bow. I think also a Sorrowblade, so let’s begin.
TB is used for quick, instant damage, BP on the other hand for damage that slowly builds over a long period of time. Sorrowblade is universally used, its a mix between tension bow and BP. That’s why it has an existential crisis, it just doesn’t know what it wants to be.
NOT TO MENTION that Glaive is made to be a bruiser with a critical strike build… Not a single Crit item in the build. I’ve seen new players using this build and obviously they totally failed. Glaive is a one of a kind hero, he has lifesteal similar to serpent mask and can get 100% Crit chance with only two crit items, so it’s a mystery to me as to why you wouldn’t build him with a SW, 2x TM or BP, 2x TT.
Seriously, it might be meta for 5v5(which is impossible, let’s face it), but objectively it’s dirt, pure dirt. It has 3 items with 3 different playing styles, this build is like firefighter “Should I become a Police Man or an ambulance driver? Idk, let’s just become both.”,
“Should I become an Assassin or a high-sustain bruiser? Idk, let’s become both”…

I can’t believe no one ranted about this before, or am I the only Glaive main? Whatever it is, let’s have a discussion about this. 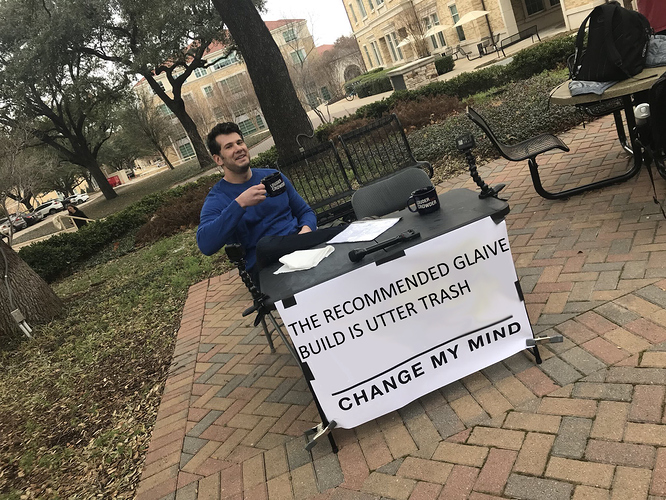 Tb is an early game item that offers bursts of wp. These wp bursts allow you to stack BP more easily.

Tb BP TM TM isn’t all that bad. Those items work very well together. Also Glaive already has high base crit in his kit so he doesn’t need much on top of that.

This funny thing happened this update where I was gonna play some lane Glaive right but I crashed and I was so frustrated but then when I came back I noticed the enemy Vox was gone too and I was like bruh what is this. And you know that moment when you go AFK or reconnect they start forcing you to buy the recommended build whenever you want to quick purchase. Well by accident I purchased TB and I was lane Glaive. I still did chunks of damage so maybe people just underestimate it too much sometimes?

I’d have to disagree. His kit does offer him Crit, but does it hurt to increase that? No… Glaive can deal tons of damage to multiple people when critting, much like a close range CP Vox with lots of sustain. TB helps stack BP stacks… Every 6 seconds. I really don’t see it working out

I still did chunks of damage so maybe people just underestimate it too much sometimes?

Let’s analize a tiny bit… Sorrowblade gives 150 WP, Tension Bow 50 and an additional 210 every 6 seconds. Now, in my build with SW, TM, TM I do lots of burst damage. If I remember correctly then it was ~700 damage to an armored target… 22% lifesteal. I dislike tension bow, and Glaive is probably the worst hero to put it on except if you wanna play TB, AS Glaive

Glaive is probably the worst hero to put it on

TB is actually really good on Glaive. You’re focusing more on Glaive lategame rather than early/midgame, where he’s meant to shine. TB works well with him because it greatly improves his ability to gank and destroy squishy targets for fairly cheap (especially in comparison to SB or SSw).

When he jumpstarts BP with tb and then hits multiple enemies what do you think happens to the BP stacks?

Here’s my argument for it:

Glaive like Gwen seeks to do early burst and snowball. No item provides more snowball potential than TB. Glaive’s A procs TB upon the knockback giving him the Afterburn damage and TB damage. The best way for him to mitigate TB’s low base damage is to build a high base damage item, SB. With no base WP scaling skills, Glaive needs a way to scale to late game and BP gives him that. A Glaive with TB and Afterburn can one shot most laners at 1/3 health. Adding a SB lets him Afterburn, Twisted Stroke for a 1 hit TB proc and Crit proc with 200 built damage and 210 proc damage.

Heroes with AA resets, like Glaive’s Twisted Stroke or Ozo’s TRC, should put a lower priority on attack speed items. So Glaive going 2 damage items like TB/SB or SSW/SM or SB/TM makes sense. After that pick BP or TT to max potential damage.

Tb is good for early game, gives pierce as well. Glaive has crit built into his kit already, so that’s why Sorrow blade and Breaking point work, build stacks easily and Crit for insane damage.
The thing that falls short for this build is he got reworked so many times and can’t sustain through a fight long enough anymore. So yes, the build you recommend does offer more attack speed with higher Crit chance.

I used to main Glaive, a long time ago before they nerfed the hell outta him. Only tried him recently in 3v3, to get the feel of using him again. I personally like SpSw on him, SB and TT. Add in a BP if he’s not getting targeted to death.

TB is very good on glaive. In 5v5 the biggest problem the jungler faces is lack of gold; this is why you no longer see hypercarry junglers like you would in 3v3, and instead you see junglers that have strong early games and don’t need much gold to come online. TB is THE early game item to have, very cheap and helps you snowball effectively. SB again helps with the burst; a TB proc on afterburn combined with SB is going to hurt. BP is pretty much a requirement on a weapon hero at this point in 5v5, it’s so easy to stack with so many enemies.

I used to be a fan of SM and a couple TTs and TMs thrown in but this build is simply better.

I’m talking about 3v3,sorry you thought it was about 5v5. BTW, SM is useless on Glaive, because it doesn’t stack with other lifesteal and Glaive already has 22% lifesteal from his Ult.

I do think generally, Idk if all of you talk about 5v5 for some reason, but in 3v3 it’s really no use to me to build early game items that can’t be further upgraded. There is lots of ways to build Glaive, as long as you remain at 100% Crit chance, the named arguments do not change my opinion, because personally a Glaive gank has nothing to do with damage, but with the catapult from Afterburn, which is the fatal thing about the entire gank.

Pair Glaive with Lorelai or Gracebso that when he is near death and high on stacks he can finish people off because of a big barrier/heal.

Why wouldn’t we talk about 5v5? It’s the future of Vainglory.

We are not talking about 5v5,because the topic is meant to discuss 3v3, sorry if it wasn’t clarified in my post 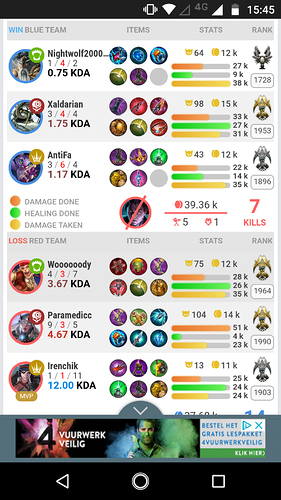 Reim already has SP, so getting PS and SpS is unnecessary. Yes, Glaive runs into a lot of energy problems, but you should rather trade in Journey Boots for Halcyon boots than extremely important dps. That TM is very lonely, it needs at least one critical friend to be happy

Edit: A good build in this scenario would be BP, TT, TT, due to Ozo and Catherine

BP TT TT would leave me without any damage… Guaranteed way of getting myself killed. Vs them I need raw damage stats like Ssw/tb/SB/SM all 3 items you suggest are mediocre vs them. Especially for a melee…

If I wanted raw damage I’d go SSw SM TM as a laner who needs sustain.

HC aren’t about the energy alone. Its about the cooldown.

Lower cooldown means more twisted strokes which offer guaranteed crits. So in a low CD build TM>TT because of the damage and crit damage.

Since when is mediocre a bad thing? It doesn’t matter, if it works, also, Glaive is pretty bad at laning, because his A only works if the target is close to a turret secured by another person. Another thing is that your team didn’t have a ranged hero, which is bad… I essentially I don’t blame you, because this discussion isn’t about a random build you used in a random match.