Does there happen to be any tenno operatives in here?

I’ve been heavily debating starting it, as I used to be an avid FFXIV player, and just on the whole miss the MMO experience.

That being said, FFXIV was draining for me, and, I’m not totally prepared to commit to a grind/list of items I will never get/unnecessary amounts of time with little return. Not saying WF has it, and, FFXIV didn’t necessarily have it either in every aspect… I’m torn.

I refuse to play WoW because the art style makes me sick, and, I can’t play anything else because I simply can’t afford it. I see Warframe is F2P so…? Maybe?

Hey. Yeah I play Warframe. Just started eidolon hunting (just built my first amp), working on my second amp and trying to do the triple eidolon capture solo(potatoish laptop). Also been focus farming though not as much so I can get those nice operator waybounds (mainly madurai and zenurik).

Should definitely it a try, it’s free so there’s not much to lose there. Warframe despite being a f2p, has one of the fairest monetization in the gaming industry, unlike their AAA counterpart (cough* Destiny). Everything, except Tennogen items can be obtained for free, including it’s premium currency, which you can earn though trading.

In terms of gameplay, Warframe is definitely on par with triple A games. Combat feels smooth, character movement is insane, weapons are all different, “classes” are diverse. For customization, it’s bloody fantastic, as the saying goes, Fashionframe is endgame. That and Ikeaframe.

Just a heads up though, Warframe is hard to get into for a new player since the game does not do a good job at teaching you everything, especially modding. Also this game is a grind fest, so it might not be for everyone’s taste.

Thanks for this reply. I’m still considering it, have been thinking about it since this post yesterday. I was very deep into FFXIV and was on the grind a lot, and I mean a lot, so I wouldn’t have any issues going that route - I was a bit of a completionist/collector in FFXIV and spent about 4 years straight in that game almost daily. I miss it, but, I’d like to try something new rather than go back.

I’ll download it and give it a go later, kudos

Good luck on that. My potato of a laptop is only barely able to run the plains, god forbid I return to a full Cetus. I’m currently focusing on leveling my Zenurik focus tree.

Nice! Also as a tip, use the wiki. Seriously, it’ll save you so much trouble. That and also learn advanced movements from other asap. Sprinting is not the most optimal way to go.

Zenurik first is never bad, usually always is best to go first and max Energizing Dash as soon as you can. I have it all the way maxed and it helps a ton. I have been recently doing sleepquinox Focus Farming on Adaro (meme strike opop). Also have a loki prime cooking up. Nidus and Harrow are amazing frames btw.

Focus farming is definitely a pain to do though, especially when I don’t have the greater lens on.
Am currently farming for Vauban Prime for trading along with ducats. I’m using Spore Saryn Prime on Hydron so that might explain my lack of focus.

spore saryn is still good. if you mod one of your weapons for high status (100% preferred, gas element) and a good amount of damage. Use it to pop spores and grineer willl be one shot usually (having CP aura helps too in making sure they die quickly). Also you don’t really need a greater lens tbh. It is just a .5 increase from the 1.25 focus gain of regular lenses (Eidolon lenses are 2.25 however). What you do really need is affinity boosters since they really help a lot with focus farming or leveling up stuff in general. 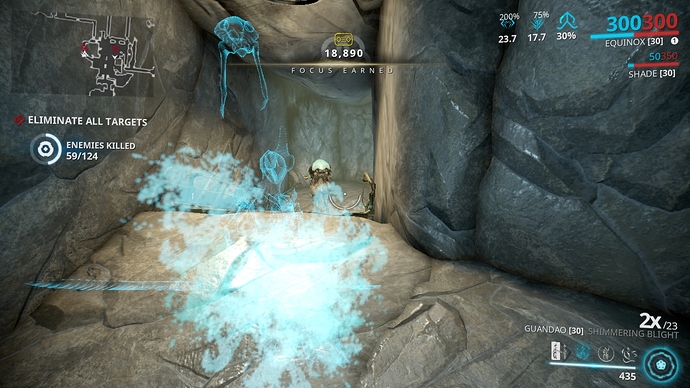 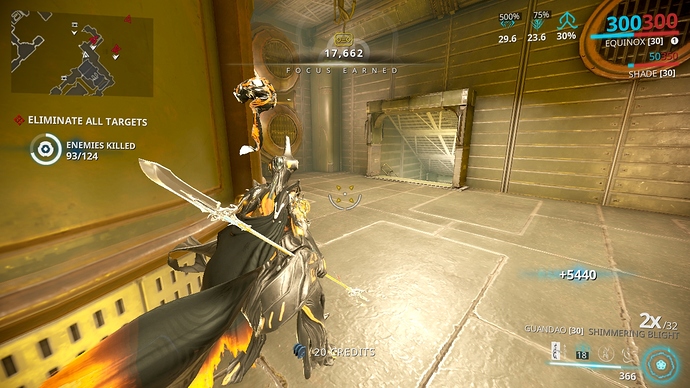 Warframe0100.jpg1280×720 704 KB
These are examples of how much focus you can gain through an adaro run with Equinox. Usually you can get 60-80k (sometimes more) focus. This is with a 2x affinity booster and I would recommend buying them if you plan on focus farming. It’s kinda hard at first but you’ll get the hang of it eventually. Although there will be runs where that one guy spots you and messes up your focus gain. I just run lenses on warframe and the melee weapon.