The issue with fortress 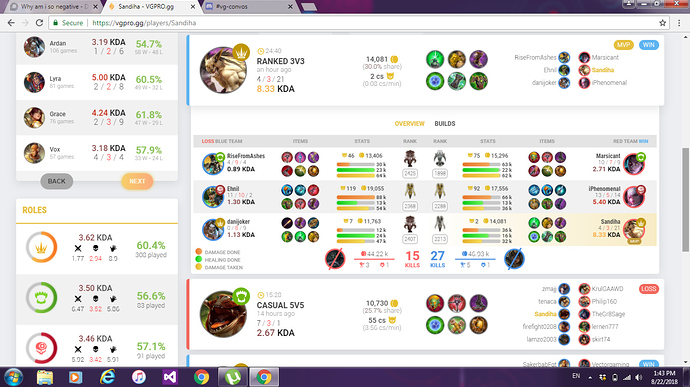 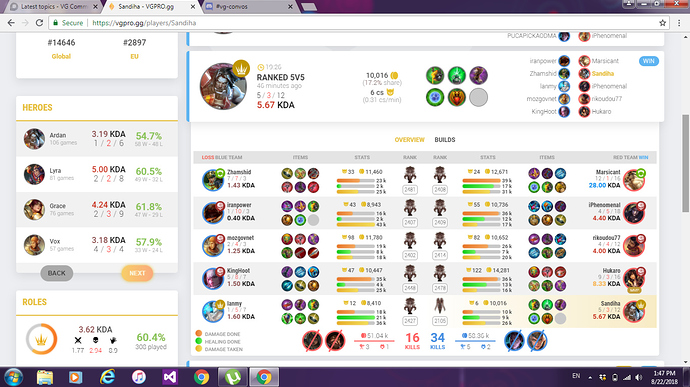 image.jpg1366×768 371 KB
Fortress summed up in 2 pictures, 36k damage without a single damage item yes its a 24 minutes game but still outrageous, 39k damage with just aftershock in a 19 minutes game. Fortress needs a serious nerf, not some 60 base damage reduction on his A, he needs to be hit with a hammer. He will probably get some insignificant small nerf tho because he’s basically free elo for all the newbies and semc doesn’t wanna upset those.
Guest_78 August 22, 2018, 11:53am #2

The problem is not the A, its his mortal wound: It deals damage based on the target’s MAX (not missing as the other heroes) health with crystal ratio (and in fact a quite good ratio) meaning that once he unlishes the wolfs its a lot of free damage for the enemy.
It deals rn 16% Max health +5% CR, this means that with AS, against a hero with 2500 health (glaive and almost every warrior) It deals 443.75 base damage only with that (It also has base damage and all that), but wait, It can be reapplied and that ability only has 7s base cooldown (remember that he builds cooldown), so he will be dealing just with the MW 443.75 damage every 7s (that with new items can be reduced to 4s). Now, if he uses his ult, he will be dealing all that to 5 enemies, thats a lot. What happens if he builds also BM and infusion? It delas ~618.75 to 5 enemies when using his ult and that can be reapplied every 4s. Thats huge. There is where his damage comes from. Remember that this is tanking into account only base health, they usually build health too.
Formula:
(Max health)* (0,16+(Crystal*0,05))

The problem is not the A, its his mortal wound: It deals damage based on the target’s MAX (not missing as the other heroes) health with crystal ratio […] It deals rn 16% Max health +5% CR, this means that with AS, against a hero with 2500 health […] it deals 443.75 base damage only with that.

The effect also requires 6 auto-attacks to trigger. If you just ate 6 auto-attacks, including -I have to assume- from the enemy WP carry… do 443.75 points of damage actually matter?

Is that worse than being stunned, for instance, and catching 2 more AAs?
It looks impressive in post-match stats, but it’s nowhere near as bad as people make it out to be.

Fortress has no CC at all (without itemization). That he has higher damage potential than other Roams to off-set this shouldn’t come as such a mind-boggling surprise.
Otherwise you can just delete him from the game and be done.

Wartreads on a 5 seconds cooldown, applies mortal wounds, tankier than most heroes, insane self sustain (ult fortified health and A lifesteal), Deals damage with one item, has a slow, spawns an army of 5 wolves which can body block pretty much everything and prock his slow mortal wounds and deal damage, synergies really well with rooks and pullsweave and most health items in the game, really cheap build to pull off and he happens to be the easiest hero to play in the game. I don’t think there is a better hero in any moba let alone vainglory.

little copy pasta from my initial fortress thread, fortress needs sooo many nerfs to be balanced

Okay. So to sum this up:

Well, I guess we found a new Roam main then!

He’s not fucked if he dives tho if anything its the other way around once fortress pulls the trigger the only safe place is probably your sanctuary. In this meta Fortress is basically an improved version of 2.9 Alpha (the patch when they changed hp and left aftershock untouched) but fortress literally deals significant damage with just aftershock or even without it as shown in the screenshots of my post and thats already enough to make any hero broken. It means that he can dedicate 5 items to defensive and utility items which is just insane. But fortress isn’t just a hero that can deal damage with 1 item like Alpha was in 2.9, he also has a kit that is enough in itself to make him meta.

You say he doesn’t have crowd control but there is literally no hero in the game that offers as much utility as fortress does, any support needs to invest 1900 gold to get wartreads while he gets one for free and on a much shorter cooldown, besides Rona and Taka every other hero needs to invest either 2250 gold on shiv or 2700 for a spellfire to apply mortal wounds while he gets them for free, not only he counters sustain but he also gives his allies a shit ton of it and once again every hero needs to invest 2700 gold on serpents mask while he gives allies one for free, his slow is actually procked instantly in a 5v5 teamfight 6 basic attacks is literally nothing specially with his A everyone is gonna be collapsed on you in an instant, his ult basically procks a teamwide slow and finally he has the best frontlining potentional in the game like his wolves alone can body block pretty much everything and with how tanky his ult fortified health makes him there is nothing that will go trough you. That’s basically 6 major utility features that fortress provides, in comparison Ardan offers a barrier a speed boost zoning a slow and frontlining so thats 5, Lyra offers a heal a slow a snare and heavy engage so thats 4. Yes Lyra’s and Ardan’s utility is more versatile but fortress also deals a shit ton of damage, has the cheapest build possible and is the easiest hero in the game. Fortress is the best hero in the game there is not a single hero that is close to rival him. I was talking about jungle fortress btw, captain is not really a thing

[…] Fortress literally deals significant damage with just aftershock or even without it as shown in the screenshots of my post and thats already enough to make any hero broken.

Except he doesn’t. He provides team-wide utility that allows his allies to pull ahead in damage trades. That the damage is attributed to him on API sites is cute, but he won’t be going around dishing out half a dozen AAs by himself in team-fights.

If you get initiated on by him and can’t turn that around, then you got outdrafted. Shit happens. But if his team dives into a Blast Tremor or Gauntlet, much lols will ensue.

I don’t even want to argue against him being a viable (situationally strong) pick. It’s just that you’re blowing shit wa-haaaaay out of proportion.

The effect also requires 6 auto-attacks to trigger. If you just ate 6 auto-attacks, including -I have to assume- from the enemy WP carry… do 443.75 points of damage actually matter?

6 AA from ANY hero, when there are 5 heroes its not that hard, plus It slows, deals mortal wound and has low cooldown. He also offers permanent wartreats.

Him diving 1v5 and trying to proc everything himself is kinda off topic though don’t you think? If my order enemies are t4 I can beat them 1v5 with Petal and if I face full pro team in soloq I’ll get destroyed even if I have the most OP pick. This doesn’t speak for the general power of the pick though.

He’s not situational tho you see fortress left right and center and despite being spammed everywhere he’s had the highest win rate for a good 6 months. Like usually high pick rate hinders a hero’s win rate cause it means more bad players playing it but i’ve literally the worst players out there who were stuck in poa gold/low vg bronze for their entire life get to 2500 elo and even silver by just spamming fortress. Below vg silver i would say Fortress is the most prioritized pick after Kenetic Kensei and Ardan i don’t know what to say really you don’t seem phased by him at all but fortress needs to be bit with a hammer to be balanced. Like i’ve played at a pretty high level for the past 2 yeas, i’ve seen the most broken stuff in the game i’ve seen Lyra on release, 2.9 Bf, Varya on release, Kensei on release. Fortress isn’t on that level of broken but he’s not far either, he will be nerfed in 3.7 but it won’t be anything too serious just some small stats and he’s still gonna be obnoxious.

Thing is if hes nerfed enough hes a potato. He cant get balanced in his current state, he needs a rework. Grace and baptiste counters him hard enough, but when hes not against them hes op.

Him diving 1v5 and trying to proc everything himself is kinda off topic though don’t you think? […] This doesn’t speak for the general power of the pick though.

The argument here is: Fortress does XYZ, so OP!

When in fact: Fortress enables his team to do XYZ.

He provides team utility and needs to be counter-drafted to shut that down. It’s absolutely possible to zone him out and render him more or less useless in his role as initiator.
That his burst damage gets triggered faster in 5vs5 is true, but by the same account: He’s diving into 5 heroes now - and if you eat enough AAs from his allies to trigger that burst, you were dead anyway.

This is far from the strongest iteration of Fortress we’ve had. He’s not impossible to deal with. You just sortof gotta deal with him.
The whole discussion reminds me of “oMg TaKe cAn gO inVisUblE”, just at a higher level of play.

Fortress got nerfed in patchs 3.0, 3.1, 3.2, 3.4 and 3.6, that’s 5 patchs out 7 since 5v5 release and he still maintained the highest win rate troughout the entirety of those 6 months. He can still take a couple nerfs and still be really good but i agree he does need a rework.

You’re missing the point tho, the discussion was never about how fortress doesn’t have any counter play but he’s definitely obnoxious and the best hero there is out there.

And that is exactly what I said. It’s like saying Ardan is terrible support. His vanguard might be one of the best abilities in the game but if you dive 1v5 you can only vanguard yourself and it’s not that strong. Of course your team won’t AFK when you ult as Fort. Yes they need to be playing the game but that’s hardly surprising isn’t it? Also getting AAed 6 times doesn’t mean you’re dead. You can be hit by anyone including the sped up AAs of Fortress himself and any of the wolves. And when it procs guess what? It doesn’t end another B is started if a wolf is alive. So maybe now you’ll understand why his damage is so good. It’s not “just” some additional damage. It’s very impactful. And all that while permanently speed boosting his team.

His ult needs a heavy nerf imo. You basically cannot engage if the enemy fortress ults, you have to kite back and kill the wolves which is super hard to do because it’s fortress, the king of dives.

'kay, going to bow out here. It’s just kinda sad that whenever a hero actually does what he’s supposed to do, cries of “OMFG NUUURF!” go up. (Though usually about 5 patches late, as Sandiha pointed out.)

Ardan in normal modes and vanguardian lvl 20 both do what they’re supposed to but we can all agree there’s a big difference.

He was Broken too
I dont think he is near yo that state of broken, but i agree that he needs some tunning, but they keep nerfing the wrong thing: the A base damage, which is useless, so until they change what he actually needs changed he will continue in this state.