Alrighty. Next up from Team RWBY is Weiss. Weiss is a melee hero who carries a rapier named the Myrtenaster. (Also, again, if you haven’t watch RWBY, you definitely should go do that

, these heros would make a whole lot more sense. (also sorry if theres some lack of creativity, Weiss is a little harder than i thought she would be)
(And now that i hit post by accident, this will be going up at so much at a time. i will put (FINISHED) in the title when its done.) 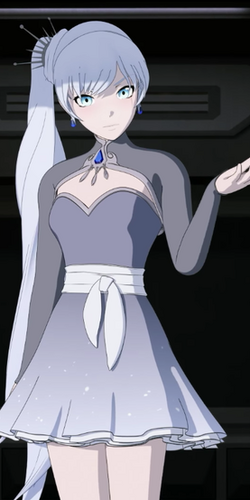 I suppose Weiss could be a Captain/Roam with her abilities. But she could also be a CP carry
Perk: “Ice Queen”
With every basic attack, Weiss stacks her perk (max of 4). After the 4th hit, the next hit slows the next target by 30%. Her perk also stacks with items.

Just gonna add a link to the “White” trailer so that people who don’t know RWBY can see Weiss in action:

Okay, I’m getting interested in figuring out her kit. I like the idea of her as a support. I’d suggest combining her B and C abilities as you’ve described them, since they’re fairly similar in concept:

B creates glyphs beneath nearby allies which provide a slow to enemies and a speed boost to allies. Maybe a damage boost to allies as well, since that would reflect how she fights in the series, using her glyphs to amplify her team members’ own abilities:

I’d suggest changing her ult to reflect her most difficult skill, which is truly unique to the Schnees: the ability to summon the avatar of a defeated opponent to fight for them:

So activating her ult would summon an Arma Gigas to fight along side her for a few seconds.

i may or may not change it. I like what i have right now.