Cam anyone tell me how to play rona. I just bought her cause I had a bunch of essence and I got a legendary blueprint for her and I might as well waste it on a hero I was kinda interested in. I’m not sure how to play her right cause I’ve been practicing with her an blitz and I lost every match and I still can’t seem to get the hang of her sooo help ples?

Blitz is the worst place to practice with a hero youre unfamiliar with.
Basically for Rona you build BP stacks and bloodrage on anything near you, then you jump in on the squishy carry and two shot them by mashing your B for the s k i l l e d o u t p l a y.
You outduel most melees and mages so splitpushing is an available strat you can try.
Rona isnt that good now though she took a few nerfs.

They should de-nerf her from the nerf she got patches ago.

When she gets just that tiny little buff to help with her damage and farming I’d say consider learning her. It’s hard to play her in general right now even in standard modes without proper support. She has terrible early game and if she doesn’t have two T3 items by 7-9 minutes she will be potato for the rest of the match. There are two playstyles for her, assassin or tank.

The assassin build goes something like: SB TT TM TM. You jump on your opponent and if they are close to you just AA them if they begin running away use your B to lunge at them and burst them down because you get an attack speed buff after using the second activation. This is kind of useless at the moment but it works better as a split pusher rather than an assassin build.

The tank build is: SM BP SS/SB/BS (Aegis and MJ)/(Capacitor and SH/Aegis) Journey Boots too. This build is the most standard one and using your own player knowledge you must decide which items to choose but SM and BP are must haves. In this build you basically ramp up in damage over time and the SM is there to help you out. Rona when using this best has synergy with literally only Ardan as all other supports do not do what he does, but Lorelai is good too. You jump and pray that you land your A. You get your fortified health and begin using her B and mash it (have full bloodrage when doing this) after that you begin AA again and have full bloodrage and you begin spinning like a beyblade. This should kill em and if you have an Ardan it gets even better because he can boost you and then when his speed boost is over you can use Journey Boots. Important to note is that as long as you are hitting your Ult, you get Bloodrage so you can spin forever and get lifesteal + BP stacks.

She is pretty bad right now though so maybe just hold off on her.

The problem was people complained about her early game damage even after her early game damage was already nerfed. Her late game now is the same as it always was, so basically she was a get fed or begin feeding hero and currently falls under the latter section. I don’t understand why balance team didn’t just meet halfway with her previous nerfs in this recent update but whatever. They could have kept the B nerf (which was a good nerf) and met halfway with her basic attack damage (now she can’t even clear lane properly.) Maybe she was meant for jungle though so who knows.

well, to be fair… Rona used to be the Queen of objective take downs in blitz. so OP might be relying on some old advice.

the trick in using her is… Letting those AutoAttacks stack bloodrage. How? by incorporating a little rhythm into your attacks. use an ability every 4 seconds. AA in-between. Your ULT will be available much moar than you realize.

Some traps that Rona players get into:
not utilizing her A, which gains 35 bloodrage for each enemy hit. it’s capped at 100, so just aim to hit 2 or 3 heroes.
Using the Second B too early. Great for chasing down enemies.

If you just do those 2 things right, then you’ll find you won’t need to think about when to use your ULT, as it will come natural. Cancel the ult if you’re not hitting anything.

Thanks for the tips. According to you guys she’s not that good at the moment and that kinda sucks

She doesnt suck necessarily but playing her in a rank game could mark your death due to better picks. I usually build this on her in cas games and it works out for me. Hopefully u can understand why i chose these items but feel free to ask why i chose them! 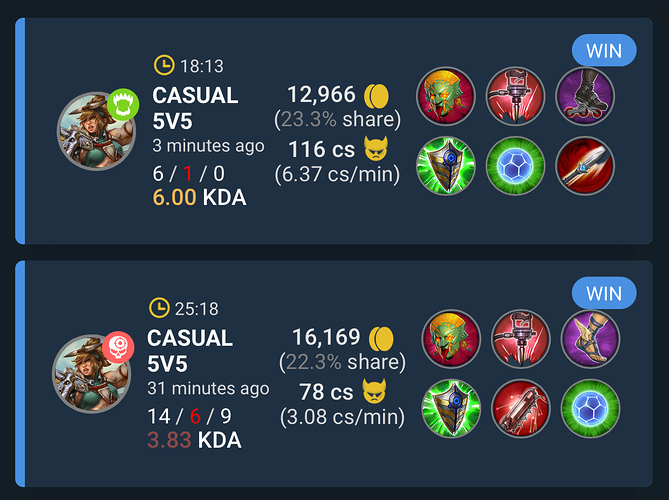 edit: i only play rona cuz i have her LE skin and sometimes i just want to flex my Skin off ;-;

edit: and the sunlight boost

Why bonesaw? It is one of the worst items in the game. Enemy can just build hp instead of armour and mitigat all of your shredding…

it depends on the enemy’s build as well, I can make sense on those items.

The problem is that on a target with no armour build you won’t be shredding much armour. Thus you cap that items damage potential immensely. While other items help you deal reliable constant damage like TM and TT which also scale with BP Scalable damage.

Also you shred single target armour and weaken that target to all incoming wp damage, that scalable damage drops back to zero once you hit your next target.

If a Captain stacks HP and builds no real armour than all you do is hurt yourself.

With the rise of the new SH you might see more armour but BS is a specialist situational item. Unlike PS and BP which are generalistic items that work in any situation.

No 1 Rona tip, don be the noob who engages with her A, if you want to close a gap then boot into them. Her B is so much stronger when chasing down squishiest or disengaging when you’ve over extended.

Unfortunately Rona isn’t in a great place at the moment, they’ve nerfed her a little to hard so she’s more of a situational counter pick IMO. For instance you don’t want to pick her into Grace or Catherine because they’ll stun lock you to death.

Don’t think about it to much I use BS on BF and Vox, used to be on Rona but I don’t play her much anymore but I still would. Although when I am snowballing I build SB because WP infusion makes up for the attack speed. It’s stats suck but it just works for some reason.

Here is my tips: Don’t use her. She is pretty weak right now. She is somehow an image of Reza, but with all the nerfs she goes through, she is having 42% winrate.

If the enemy player is really good, especially with the given hero and above the other players in the server - he will destroy with any hero. Some players are just too good for the server they are in (10x MM), same as we can go in t4 game and beat badly with any hero.

Rona needs buff, but not by much and will be relevant again. Some other heroes also needs a buff, but we will see what 3.6 will bring.

Rona just needs a little bit of early game damage to be able to clear minions lol. I feel like her late game position is perfectly fine (being a tank that does a fair amount of damage) but she still needs to be played into certain comps like 2-3 heroes that can’t move well, 2-3 heroes that tank, or a 4-1 hypercarry composition. Her early game is so easily abusable that its just no fun playing as her because there is a certain moment in the match when you can actually come online…