Ranked match is getting worse

I lost two ranked match in row. First, my team had snowballed the enemy team and everything went good and our team got 10+ killed but in last minute SAW of my team abandonned the match. We lost.
Second, a dumb instalocked Cath and everything went bad. She could not play captain roam and she built crystal and this was make me crazy. She didnt understand that there was Taka in enemy team and suggested many time to bring flare or contraption. But she still so stupid going feeding. I was Varya and I knew Taka would absolutely target me and hopelessly I brought Contraption just to help Taka my jungler. Taka my jungler was a good player but everything ruined by Cath stupidly.

Why should I have to get the lost from those two match? I played well at least i know what to do as player not trolling and not feeding. Just beacuse one player who ruined everything, why should my rank point decreased? It was not my fault. This is why I stuck in low tier for years…

When i got salty feeling playing VG, I move to MLBB. Unlike VG, I never spend my money for this childish moba. I dont say this moba is bad But something interesting about the ranked match in MLBB. There is point that when reach the max number, it will converted into rank point. This point can obtained from ranked match and doesnt care win or lose. If I lost the match but I got MVP or highest KDA I will still gain some point. This is why I like this ranked MLBB. There something to respect player even they got lost.

My point is, what VG’s devs can do to respect good player in lost match in the future? The ranked match’s rules should be revamped.

OMG I am so salty.

At least you do not lose elo from AFKs and it really sucks getting a dumb Cath. I’ve been there. You just gotta see it through and keep climbing. You’ll get to the tier you belong to.

Afk doesn’t register 70% of the time…

It takes ages to recognize an Afk so yeah you do lose elo. .

Did you thumbs down the AFKer? I don’t know if that helps trigger anything, but I have never lost points when someone went AFK.

I did thumb down for AFKers and Toxic player. But I believe there is nothing happen to the players. Because I have ever reported directly via mail to SEMC and they just said sorry for what happen to me. Nothing they can do about toxic and afk.

If your allies had been registered as AFK, of course your point didnt decreased. You’re forgiven…

This is the screenshot of SEMC reply about trolling in ranked match. 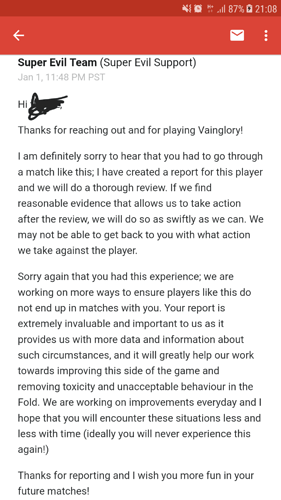 And this means nothing.

Based on my discussion with SEMC’s customer service and support team:

Actually, you’re very wrong about reports doing nothing. They are actually reviewed by a human being, and action is taken based on what they find when investigating. It is unlikely that you’ll receive any further response from SEMC regarding your report, and you won’t necessarily see a “player has been banned” message soon after your report (if that’s the action that is taken, it may be some time before it happens), so it can feel like you aren’t getting results, even though you actually are.

Also, some reports don’t merit disciplinary action – perhaps the player you think was trolling was simply new and inexperienced, or perhaps they had network problems resulting in huge lag spikes. In those cases, no further action would be taken after SEMC investigates.

The point is, the reports (especially the ones reported through the web site, in my experience) DO result in appropriate action being taken.

Also, (not directed at the OP, just a general bit of advice) an important point that I read a long while back and think is very valuable to keep in mind:

Be sure you are not part of the toxicity problem.

If you constantly rage about how bad your teammates are, how terrible the matchmaker is, and that everyone around you is an incompetent n00b … maybe your teammates aren’t entirely the issue. I have played with numerous players who have constantly rage-pinged or trolled after the first setback in a match, which obviously ruins the experience for everyone on the team and virtually guarantees a loss. If this is you, you’re part of the problem …

This is why I don’t play casual that much :^). Ranked although not perfect still at least has more consistently competent players. If you keep getting bad team mates try to party up.

I even personally spoke with a dev to ban all LPQ players from ranked. They ignored my suggestion. In AOV if your credibility is below 90% you cannot play ranked.

I even personally spoke with a dev to ban all LPQ players from ranked. They ignored my suggestion. In AOV if your credibility is below 90% you cannot play ranked.

That’s what the Karma system in VG is supposed to do, but for some reason, the devs have been reluctant to ban people from playing, fearing they’ll lose players. I don’t understand that mentality, because those are players we could certainly afford to lose, I’d imagine.

And you lose a lot of players due to toxicity not being dealt with.

The karma system is a joke. They should ban LPQ from ranked. Force them to play casual until they can behave. Very easy to implement…

And you lose a lot of players due to toxicity not being dealt with.

The karma system is a joke. They should ban LPQ from ranked. Force them to play casual until they can behave. Very easy to implement…

I agree completely. I think the reluctance to deal harshly with toxicity has produced the situation we have today, with toxic players everywhere.

Fortunately I still save the screenshot about what I reported. 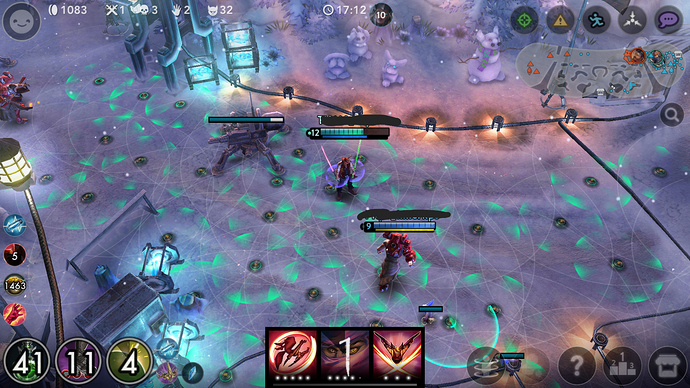 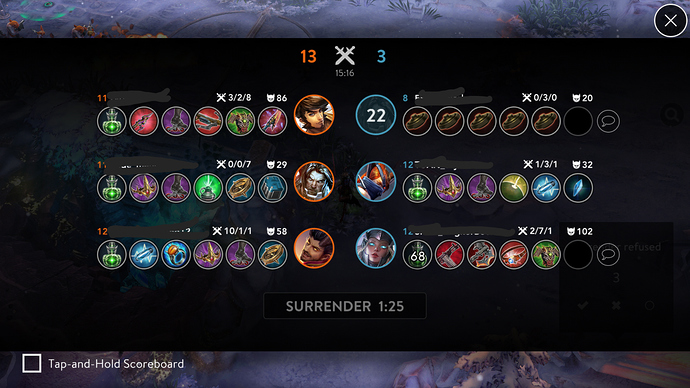 You should submit those screenshots along with as much as you know about the match (date and time it was played, server region) via the SEMC web site (“Contact Us”). When it’s blatant and easy to verify (i.e., you help the support folks see what you’re reporting), it’s always seemed to result in concrete action, in my experience.

Before you said, i have absolutely reported along with the pictures…

It happens to everybody. Work through it. The best solution is to party with trusted friends.

The only way to solve scenarios like this is to change elo gain based on the players individual performance (kda, overall impact) with an ‘minimum average performance score’ calculated per game to determine elo gain/loss, this way, no matter if you lose, if you did your best, you will gain elo, vice versa. This method will also automatically solve boosting, trolling and AFKing.

I agree. But funny is when you play with friend when the match lose there will be blame each other. Lol.
Some of my trusted friends left me finally because they think I cant support them. Mostly I play captain. They want me to heal them everytime and it is like they never understand about cooldown. Lmfao.