Post your ONE FOR ALL matches. ( Also Semc needs to do something also)

SUPER FUN game mode and I hope it stays forever but the amount of Glimmershots being thrown around had my phone like a powerpoint presentation with how bad the fps was. And my phone is top notch too 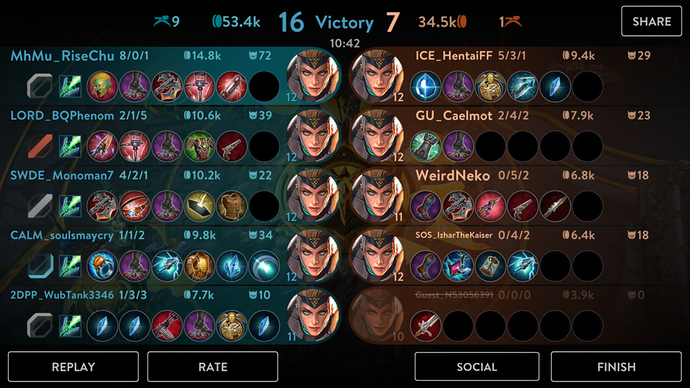 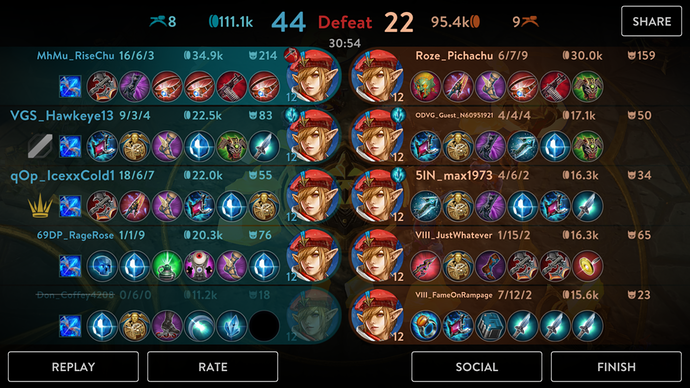 Also I hate people who afk. Whether it was for a good reason or bad, I would Thanos snap you out of existence

Sorry for you ruining the fun.

i did not screen shot but in a party with 3 of my friends without communicating the entire team picked vox on ice skin and it was excellent. and we won

Is there a freaking trick to getting to play at Kinetic?! Haven’t fought one or been one in like 14 matches.

Kinetic is the second best hero in there which is absolutely broken.

Out of the hero pool that we have this weekend…

Ringo is the best and most broken hero out of the pool. Literally the when a team fight starts, you only see a army of Hells brew chasing after you And the splash damage from it is fearsome

Kinetic is second since the whole team can spam the stun.

Vox is third only because of his CP path is cancer against a whole team of them, but it isnt as bad as Ringo or Kinetic…

Kestrel is fourth since her WP path is nice but only on a 1on1 fight. Pretty much picking off the misposition enemy. CP sucks.

Gwen is garbage compared to everyone else.

I just want my free 2500 for finishing the event lol. 16 matches now and not seen a single Kinetic group yet!

Ringo is the best and most broken hero out of the pool. Literally the when a team fight starts, you only see a army of Hells brew chasing after you And the splash damage from it is fearsome

You’re luck is on point then

It’s good but the current selection of characters available is boring, uninteresting and so small.
Carry is the most boring role to play so I’ll pass. Wake me up when they do Junglers OFA or Roamers. 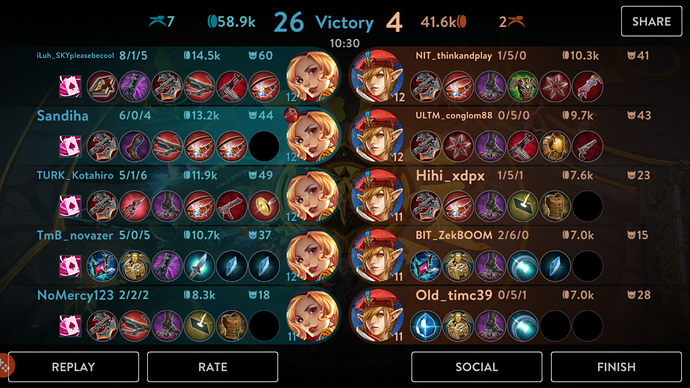 It gets kinda boring when it’s the same hero on both teams, but I had some hella fun matches too

I can imagine. One thing I found annoying when playing as Vox is that I couldn’t tell whether it was me or my allies that had resonance on enemy minions…

Playing this mode with friends on voice chat is hilarious. Haven’t had this much fun with VG in a looooong time. Phew.

I haven’t had fun yet. I don’t play ADC heroes because I can’t stutterstep, and when that alone determines which carry wins, it puts me off to the whole thing.

The more of me means mirror me!

Things I want to say about ‘One for All.’

Hopefully, they’ll improve it next patch.

When you finish your last hero do you get 500 for the event quest for the hero and another 2500 for finishing them all?

Damn i soloq the entire event without even realizing. The game mode is mad fun even though its carries only.

Every single time i get kinetic, someone dodges.
Have counted upto 7 times now and ofc SEMC had to restrict the event on one for all.
Its been more than 4 hrs for one single kinetic match.
Literally SEMC can’t do a single thing straightforward that actually works and does not end up frustrating players.