Pewdiepie has done it again

This is sarcasm. Please don’t hit me with the hate. 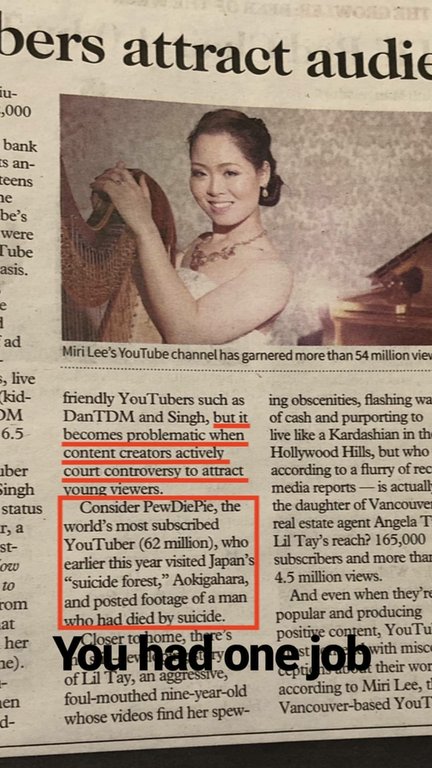 Plot twist: Pewdiepie was wearing Logan Paul’s skin to make it look like Logan went into the suicide forest and filmed it to get views

i don’t get it. please explain. whats the joke?

i just googled both of them. i don’t see any similarity what so ever. Is this a meme?

Logan Paul is a pseudo-famous D-list “celebrity” with a penchant for himself, he took a group of his cronies to Aokigahara - the “suicide forest” - in Japan.

Not too far into the forest, they came across the recently deceased corpse of a man who’d hung himself, and, instead of doing something that requires a brain and/or a heart, they kept filming and made it into something of a “viral video” of which was monetized.

It’s pretty disgusting, I can go on, but yeah.

The joke is that it wasn’t PewDiePie who found the poor soul.

I get it now. thanks. is this a regular thing? Logan Paul and PewDiePie being mistaken for each other?

Not sure, I don’t keep up with Youtubers and all that nonsense. This just happened to be pretty big news, as obviously, it’s a pretty terrible thing to have done.

BUT CAN WE COPYSTRIKE PEWDIEPIE?

Note pewdiepie didnt not do anything stated up.