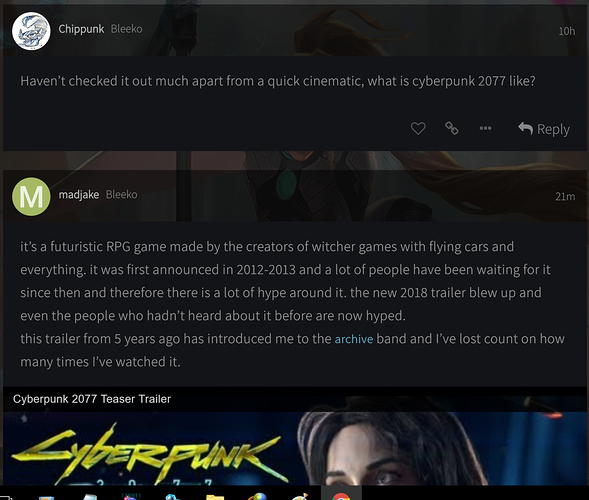 title.jpg1740×1476 395 KB
(here my post was in reply to Chippunk’s but it doesn’t show that it is)
I assume the reason for this design is that ‘it doesn’t need to indicate that it’s in a reply to the first post, because the reply is right after the post.’ but the problem is in some circumstances other people wouldn’t know if its a reply to the OP or B’s post. especially if OP and B agree with each other and C is trying to argue with B. it can be avoided with quotes but its just bad design imo.
1 Like
RiseChu June 15, 2018, 2:56pm #2

Hey look it’s me. Yea that bothers me too, wish even if it is the next comment after the one your replying to that it would still show it was a reply to said comment

I’ve been a little annoyed about that too. There’s a setting that I think will fix that – give me a little bit to play with it to see what I can do.

Edit: Think I’ve got it working the way we’re talking about now.

Here’s some background on why Discourse’s default is NOT to do it this way:

Ambiguous lack of "in reply to" label on immediate replies

@hamburglar incorrect. The blockquote in your post ties your reply to the post it quoted. Try expanding the replies to that post and you’ll see. One post can reply to dozens or even hundreds of previous posts, provided you blockquote them all… (In...

I’ve seen this around myself but I’ve never had an issue distinguishing replies… It could certainly be fixed, though, it does get messy.