A very old forum tradition was the nightly GG thread - where people celebrated good games they had had each day.

I thought I might revive that in my own way. 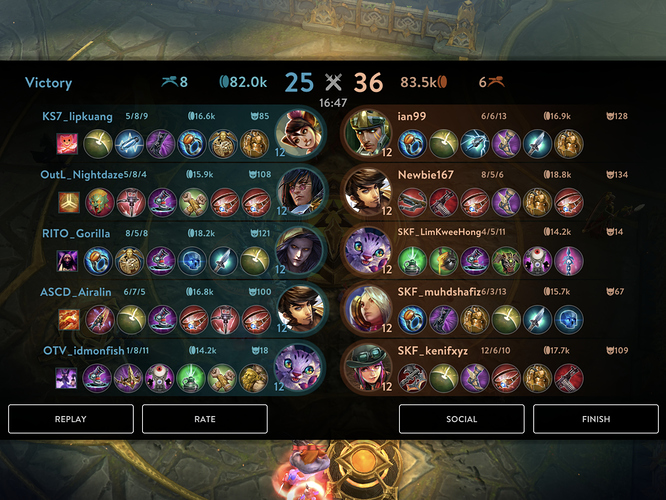 I was playing with @Airalin and his buddies in 5v5 and tbh we were kinda losing, we lost all 3 turrets first in part because I straight out messed up and got caught out by the enemy flicker and handed over first blood. And they were coordinated, practically drowning in sweat.

So it looked bad, but then we came together as a team and beat them basically using rat strats - split pushing, feinting, working them from side to side on the map.

It was one of the most fun games I’ve had of 5v5 on live so I want to thank everyone in it, it was great fun!

Ayy GG
I couldn’t position properly for the life of me, and 5 of my deaths are me missing my aegis and dying to Joules A…

The enemy was all unranked except the flicker, and the way they played basically screamed “look I am smurfing”, so m kinda curious about their actual tier now :o

Also that push in the end was op !!!
Edit: appaaaaarently, my game didn’t show any of the enemy ranks except for flicker, and turns out they were all t6 gold ish
Oh well

I have four kids, and we had the chance to all play together on the same team today for the first time! First round out of the gate we were efficiently wrapped up and put on the shelf. Second round however, we had a pretty even match tier wise… A miracle? By the end of the match we were able to do some split pushing, set some traps and eventually distract the opposing team enough to let the minions take the vain! Needless to say we have been a pretty happy bunch of campers. A great first time out for some kids who are distracted by some many other games. Here’s to many such opportunities in the future.

I just have to note that, having the chance to share this common experience and competitively work together with them has been one of, if not the, best gaming moment of my life! I did not expect this to be that significant a moment and am a very grateful dad this evening. Hope you all have a good night.

Wow man that simply sounds awesome - suddenly I feel I made wrong life choices when I stopped at two kids - it made sense for board games, but how are we going to play 5v5 when they are older?

Just played 5v5 just now on a Koshka, I think I met a player whose name was Arza, not sure if it was Arza from the forums, I’m not sure if we were on the same or opposite team, but all I remembered was that Koshka’s very strong, and the enemy’s laner Celeste (whose ign is InsomniaZ from Outl, had a lasting impression of his ign since he is from outl) died alot of times to my invasions with the help of my teammates, which were fortress, grace, adagio and vox. If it was really you, ggs Arza.

On a side note, Koshka, Adagio, Fortress and Grace makes a very good tower dive comp. I felt that our team composition was really good, except for the random vox on the top lane which is subjective, there may or may not be a better hero option on the team.

My first 5v5 game I got stuck with @HipsterSkaarf as a saw on the opposing team (I’m assuming it’s the same two people since I got a friend request afterwards) needless to say my team didn’t have any communication and HipsterSkarff was going full Rambo mode with saw and was constantly split pushing and taking turrets. He didn’t seem to care to much for his kda as I believe he had alot of kills along with alot of deaths but he was seriously focused on turrets and no matter how many times I tried for a successfull rally on him I just couldn’t get my team to cooperate as often as I’d like. The fact that he had teleport boots didn’t help either. I’d be pushing bot lane and then the next thing I know a wild saw has appeared top lane taking yet another turret lol

Haha yeah, I love SAW for games where I want to just chill out. He’s pretty low-stress for me. “Where’s the enemy? All right here? Try to stall.” “Somewhere else? PUSH PUSH PUSH!” “I’m attacking the turret… Are the enemy headed here? Go down with the ship!” I went 6/9/6 that one, which isn’t fantastic, but I guess it worked out. I played another where I went 2/9/1, which is horrible on its own, but got 6 turrets down for the win. The power of split-pushing!

It’s funny that you mention me being in different lanes from you, since I was definitely doing that on purpose!

Your resonance bounces were the only thing I was really worried about, so I tried to stay away from wherever you were until I’d built a couple monocles, which is when I started showing up in midlane. My Cath went WP and liked to take the buff and healers, so the early game was a little slower than it should have been. You guys did pretty well when you cleared vision and rotated the Krul to ambush me though… that was hell to deal with!

So, mmr set us up right. Toe to toe fight the entire way! Heart and soul both sides! Thanks for a good match to those who were in it. Great way to end the day. Im starting to get the hang of Gwen as well… trying to do my part. Lol 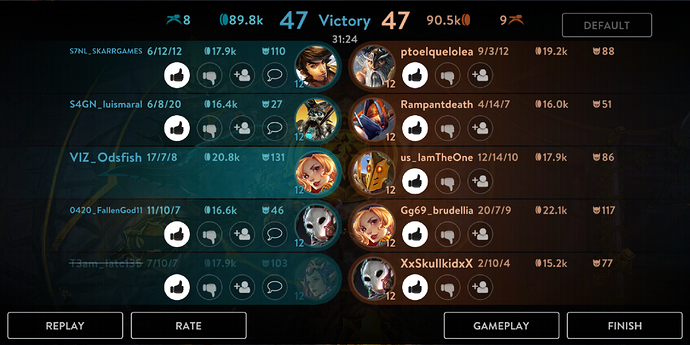