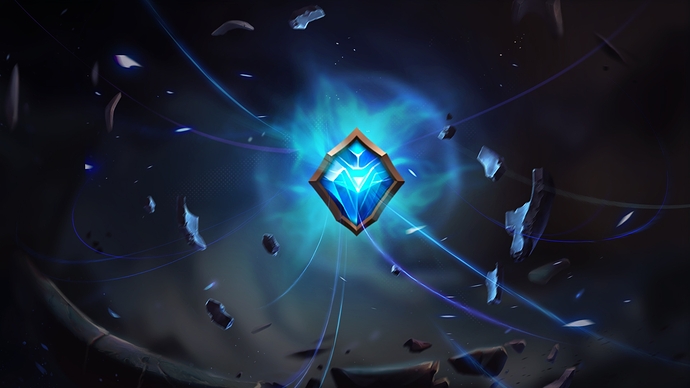 Build your League legacy by ranking up across more than 300 Challenges!

A pretty huge addition to League’s progression systems – worth reading the linked article to get a grasp of how extensive the system is. To me, this seems like what Riot wanted Eternals to be, but they discovered very few players were willing to pay for a progression system …

Hoooooo boy, Challenges are a mess

Now that I’ve played a few dozen matches with Challenges, I have mostly figured them out. The UI is pretty but not as functional as it should be: it’s often unclear what is what until you hover over it (the icons aren’t particularly obvious), and it’s hard to understand how you’ve progressed recently in any given Challenge except immediately after the match on the new post-match screens.

Hopefully they’ll work the UI issues out – they usually do … eventually. I hope they don’t lose interest in Challenges like they did Eternals. I see most players have now equipped their Challenges flair on their profiles, so participation is already far better than with Eternals (as you’d expect, since Challenges are free and Eternals aren’t).

Here’s the new profile screen, showing the three Challenges icons I’ve equipped (to show off – they’re just cosmetic). Not very obviously, they are: 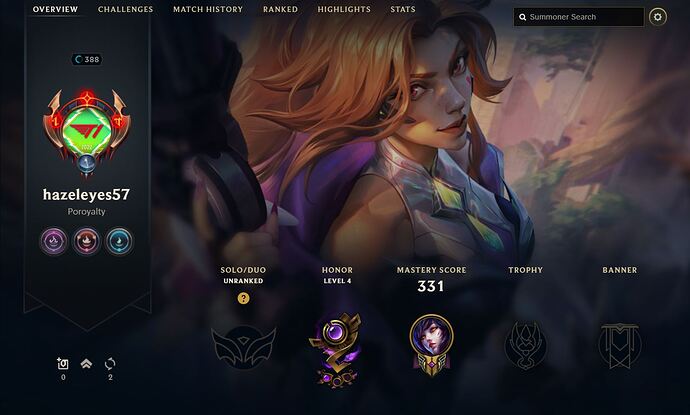 Here’s a look at the Challenges tab. As you can see, the organization of the various Challenges isn’t immediately apparent (e.g., although many of them are specific to a particular game mode, they’re not organized by game mode in the tabs at left). 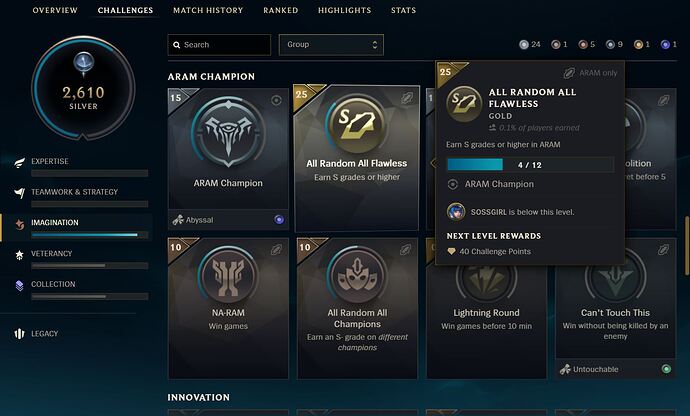 Also, the progress bar is misleading: it implies I’ve gotten 4 S grades in ARAM since Challenges were released when in fact I’ve gotten way more than that. (I got 6 the first day

) They’ve acknowledged that a lot of people are unhappy with how the progress bars work, so they’re going to change it. I don’t care that much except that there’s no way to see your progress for lower levels once you’ve moved up. (That is, you can’t see what you achieved to get out of Iron after you get to Bronze, etc. The levels are Unranked, Iron, Bronze, Silver, Gold, Platinum, etc. just as in Ranked mode.)