Was having a really good time ranking up in 5v5 duo queue with a buddy earlier. Had a 6 game winstreak, felt invincible :)))
UNTIL the matchmaker decided to suddenly go wild and match us into a full 5 man party…
Wouldve been fine and all if we had the fairly competent players we were getting on our team for the first few games but of course we got slammed with feeders. Obviously we lost and it really sucked because my buddy and I were doing so well.
Though the sudden placement of T4 teammates in our T9 game may have been pure bad luck, are solo/duo/trio players really supposed to queue into full 5 man parties??
The match in question: 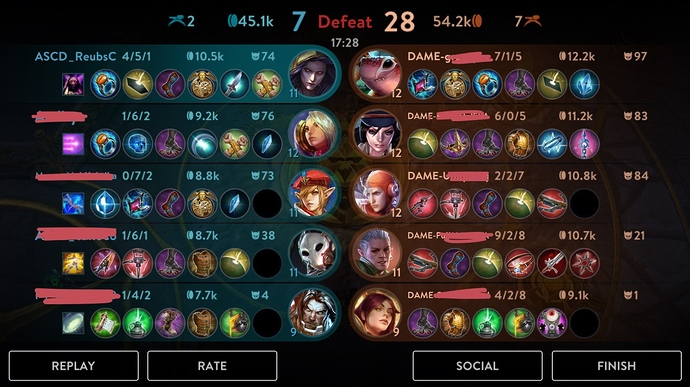 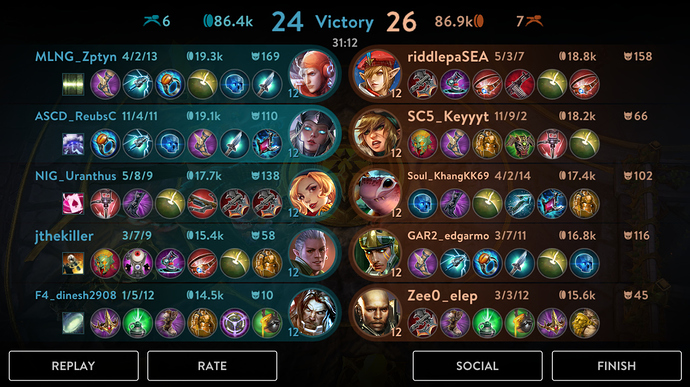 Matchmaker for sure isn’t working properly right now. It seemingly hasn’t functioned as intended for some time.

This is more of a salt-mine post, btw, so I’ve moved it there, too. Try to refrain from calling fellow players idiots. I also edited your title, so it didn’t have those random caps.

do i get to move out of salt mine now :>

An admin may decide otherwise, but personally, I think this post is best suited for Salt Mine.

There is a slew of posts regarding the same topic - participating in one of these may be easier than creating a new post about the same thing.

Honestly, I don’t really feel this should be in the salt mine.
It doesn’t belong anywhere else other than #vainglory-discussion , especially since it’s a glaring issue at the moment.

I don’t really see any “salt” in this post, tho if I was on a win streak, only to be stopped by a 5 man party while duoQing, I would be a lot more pissed.
Anyway, most of the stuff in salt mine pretty much gets ignored, so moving a thread that talks about one of the major problems that the game’s been facing lately, with actual salty rants doesn’t really seem the best decision.

I don’t really see any “salt” in this post

It was edited. You make fair points, though. I attempted to move it to the best of my knowledge at the time but I think you’re right, I’ll move it again. Thanks for the input.

how you get T3 admin

I just want to make sure this is a wonderful place for everyone.

that… doesn’t answer the question. but understandable. congrats.

It is earned. We’re digressing from the OP topic though, so let’s leave it here and let the discussion go back to normal.

It’s earned with meeting certain criterias, i.e. be… wait for it… regular

smh I’ve read every topic on the forum… and I’m about as average as you get.