Looking to and through Ardan

Hey guys sorry form the delay just trying to figure out a better way to approach these. This time we are looking at 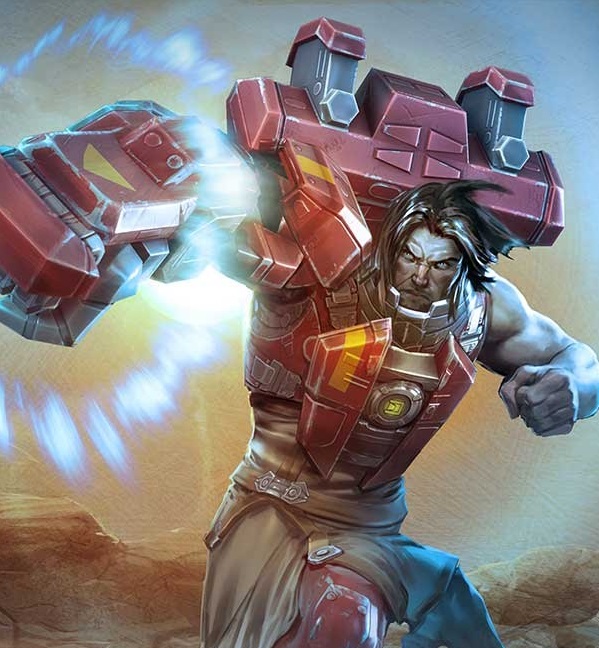 Could use some tunning maybe

Now Ardan has been here for a very long time and he has actually been pretty good in every patch as a support that didn’t use a broken carry as a support(cough tankska). He has a lot of viability and that’s what makes him a good support. Now currently I don’t know about any of you but he seems to save the day a little too much. I mean in terms of 3.0 he was the top support in Casual 3v3 and Casual 5v5. He was the top pick in 3v3 rank which is crazy.

Now vainsocial hasn’t updated to 3.1 yet so I have little clue where he could stand but from the matches I play it’s still very likely that he is very high up still. Maybe it’s because he is basic support like cath who is usually second behind him on the charts.

Whenever Ardan takes damage, he heals for 0.8% of his missing health, but no more than 75% of the damage taken.
Instead of energy, Ardan uses a yellow meter called Vengeance. Vengeance builds over time and can also be gained with basic attacks, crtical strikes and abilities.
Because Ardan doesn’t need regular energy, 5% of bonus energy and 50% of bonus energy recharge are converted to crystal power.

Now I thought and still think that this heroic perk was a neat add on. The lower the health the harder he is to kill. It doesn’t seem broken either he is still very much killable. I mean even the little cp converter is pretty even. There isn’t much to say here with something this well balanced.

Ardan dashes to protect an ally, granting them a 4s barrier and a burst of move speed. This also slows and damages nearby enemies.
Overdrive: At max rank, Vanguard grants 30% Vengeance when cast on an ally.
Using this ability on himself results in only half the barrier, speed boost and Vengeance gain.
Barrier scales up with 30% of Ardan’s bonus health.
Any time this ally takes damage, Ardan gains Vengeance.

Sorry if this seems confusing but this looks good too. It even reduces all effects if Ardan uses the Vanguard on himself. Again this looks okay but something just feels off. Like a hate love relationship, you love that it’s really good but hate that it works so well. Maybe it’s me and too many Ardan have been making the right moves at the right moments.

Suggestions: I’d max this out first if you’re going support to get that barrier as high as you can get it and that over drive could commence in handy. Same goes for weapon but as Cp I tend not to overdrive this becuase I have learned how to properly land the ult to dish out the most amount of damage I can get.

Ardan rushes forward and punches his target.
Overdrive: At max rank, Blood for Blood deals additional 40% damage.
Blood for Blood can only be activated when Ardan has 100% Vengeance and will consume all of it. Ardan also gain bonus range
Blood for Blood triggers basic-attack effects.

Now here is where ardan as a support can get iffy sometimes. That 40% increase in damage can be crazy and when you’re playing aggressive anything ardan this can hurt when you hit level 8. Even as a support but that’s only if you have to play agressive support ardan. But as a weapon or Cp this can hit really hard with only 1 tier 3 item and maybe half of another one. Though with the addition of tony’s A we can all agree it feels like a buffed ardan B.

Ardan leaps to the target location and projects a perimeter around him. Enemy heroes who touch or cross the perimeter are stunned and take crystal damage.
If Ardan leaves the perimeter, it is immediately destroyed.
Ardan instantly gains full Vengeance upon using this ability.

They need a lucio skin for ardan or maybe a knock off. I just want to here ardan say “lets drop the beat,” when that ult goes down. Great for friend zoning your enemies and attempting to pick off enemies until they use a reflex block and run out of it like nothing happened. The ult’s cooldown is a little long so you will have to use it sparingly but with a clockwork you might be able to get some of it down.

Suggestions: max this out as a cp or support for the damage, duration and cooldown. Even if they walk through it with a reflex your team still might be able to engage becuase they won’t have any personal items to defend themselves anymore.

Now as a support it varies but everyone should have a fountain and atlas is what I believe. Becuase the dash from his b getting that atlas off with good timing can be good. The rest it can vary deepening on enemy teams well team. Null wave or echo can be super useful though and crucible for those quick saves and some extra beef for that barrier. War treads too for the team engage speed.

Fountain of renewal, Atlas, Crucible, War Treads, Crucible, (What ever your team could need).

As a weapon carry you have two options I think. Tension bow, sorrow, breaking point or double tryeants, tension bow, breaking point. The first is build to amp that first B attack as it procs with his basics and some additional damage. The damage afterwards is very consistent and racks up quickly if you’re not focused. The second all though you will be more squishy you’re first B attack will do much more damage and you will be hitting much harder much earlier on but you will be easier to kill.

As crystal I have one build that att first I thought I made up but it turns out it might be meta in another server so rip. I try not to look up builds and make my own becuase I find that personally more satisfying. You build After Shock, Shatter glass, Broken Myth, Clock work for those huge burst of damage and low cooldowns. It’s a burst build and that’s the best way I have been able to play cp ardan. Put in halcyon charges for that little extra cooldown.

I hope you guys enjoyed this read and I would like to se your feedback and tell me why you all think from this information that ardan is the best support in game. Does the other support like phinn need a buff or are they have a high learning curve?