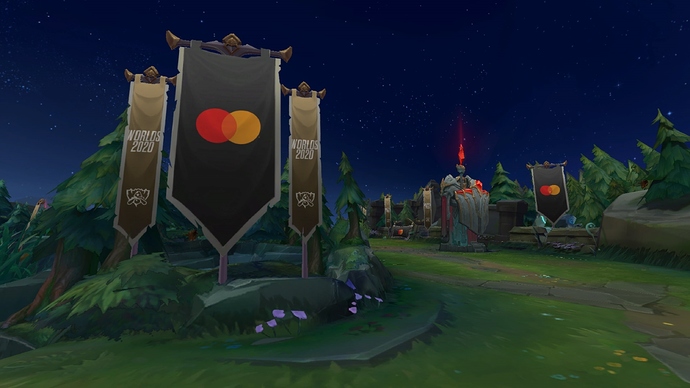 Wow, this is like watching soccer games and seeing banners running all around.

Yeah, at first I recoiled at the idea, but then I thought about it and I think it’s going to be just fine – as you say, advertising is in all other professional sports already, and these are only going to appear in esports matches, so it’s not like normal League is going to look like a NASCAR track.

The image above also suggests that the banners are likely to be tasteful and generally fit in with the look of the Rift, so that’s even better, imo. And if it generates more income that Riot can put back into League’s esports scene (bigger prize pools, &c.), that’s a win for everyone.

lol, your NASCAR track comparison is funny. I agree with your analysis and years ago, I didn’t expect that one day eSports would be on same level with other sports like today.

Honestly, as long as it’s not excessive and everywhere/in-your face, I think this is actually pretty BA. I’m all for it.

'not sure I’m sold. On the one hand, it’s nice to see that professional eSports are getting similar recognition to more traditional kinds of sports. For a lot of people who have been ridiculed as nerds in the past, this probably feels like a “Heck yeah!” moment.

On the other hand, it’s not like we need more shady monetization schemes connected to games, or more advertisements in our lives.
We are spending money on our gaming hobbies already. If we’re watching eSports, we also generate ad revenue for hosting services and content creators. And now we’re supposed to watch ads on top of ads on top of paying?
The fact that this proposition seems in any way “normal” is a pretty surefire clue that we’ve been putting up with way, way too much bullshit, collectively.

And frankly, I’m not convinced that sports becoming a gigantic business has been a positive trend. Not for the people forced to push their bodies beyond healthy limits, and not for the people being milked on all ends (from having to pay for certain TV sports packages to new merch every year to crazy ticket prices).
Football (that is: soccer) was fun to watch when the players still had day jobs. The Tour de France was a thing before every participant was injected with experimental drugs.
I’d rather go back to that and be spared some ads.

Will be honest and ofc it’s entirely personal, but I don’t really like that + find it kinda greedy given how good the game performance is. I mean, they got a working monetisations model that not only is profitable but doesn’t leave players feeling ripped off. Adding something like that is to me like: “we are doing great, how we can squeeze more money?”

Gotta see it implemented tho as it can be from decent and not that distracting to plain awful and given riot’s history I would lean more towards decent implementation and then I will be totally fine with more income for them (as in the end this allows them to improve the game further or create a decent new ones).

P.S. I also don’t like the idea: players will see the normal map, viewers will see different one. That alone is looking like it will not be a gentle implementation + I like to watch the field as close as the players do when I watch esports and learn how to play, basically. I remember from my quake years how most streams, including officials, used r_picmip for cleaner GFX and how we all play. Even if it looks a lot more uglier. My 2c ofc

I mean, they got a working monetisations model that not only is profitable but doesn’t leave players feeling ripped off. Adding something like that is to me like: “we are doing great, how we can squeeze more money?”

Just to be clear, this feature is going to be implemented for esports only (at least for now). Revenue from their esports operations is primarily from ads and sponsorships – this is an expansion of that to give sponsors more visibility, which presumably will generate more revenue.

I thought Fifa was already doing this with their tournament plays. No?

They may well be. This is just Riot announcing that these will be appearing starting with the Summer Split tournaments.

Well, here they are – from this morning’s

Yeah, I also was surprised too see just how many of them there are… imho too much. They can always tone them down tho, but I am not sure if they will do it if ads lift off and are successful.

So while they are well done, they are also kinda distracting (and everywhere) even without ads on them.