I was smashed hard 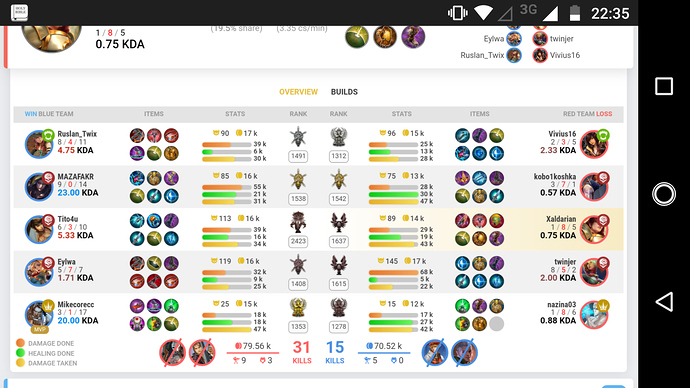 I was bottom lane Grace versus Ringo…
This was one of the best Ringos I have ever seen and I got smashed hard.

or because… grace was made as a captain, not a pure laner? there will always be that difference, no matter what your build. Her kit just wasn’t made the same way.

Absurd… so, full guild party never goes vs soloq, but full team party is going vs soloq and 4 tiers below? The f… /rage

Edit: oh, and I forgot to mention that I dealt most dmg from my whole team with captain lance (the only attack item was TB).

fun game it was.

Matchmaking sometimes is a mess. I get matched up against PoA/VG players and get destroyed. The skill difference is so apparent right from the laning phase and I wonder whether it could be a smurf but when I go to vgpro it shows that it’s not a smurf but bad matchmaking

I have a couple things about your match, not at all related to your Ringo/Grace lane issue (which, by the way, keep her in the jungle if you’re going WP. She is great outside of a being roam, but not in the lane against a ranged hero.) -

5v5 rank also does not mean that much. You may be boosted to t8 by the 5v5 mm from your t4 silver 3v3 rank but it still doesnt prove anything if you die within 5 seconds of a teamfight and stand in the middle of a saw suppress + joule brb whilst missing all your skillshots.

I also dont know why the mm expects me to carry 2 laners that miss all their farm while taking buffs opposite to their build type that is in no way contested.

Skye mid never in lane. Farmstealing jungle. Celeste vs gwen top. Adagio followed taka… taka kept invading enemy jungle attacking Ringo. In teamfights I was the only melee. My side refused to engage with me ever…

It was a horrible game…

That sounds like a horrible game and yes a mismatch up in many ways. Almost no hero was in a lane good for them.

One time I was soloQing and played against a dev (with a - - in their ign). I had to solo top lane with a fking Saw with a babysitting Lyra and my teammates managed to die EVERY SINGLE 5 minutes to a Krul when even nobody rotated and helped me.
I lost but with positive KDA and I downvoted 4 other teammates for unskilled play.
I checked in vgpro and all 4 of them is tier 4 and the enemy had 2 VG silver and the dev was in a 3 man party (I can tell cause they are streaming on YouTube)

seems like you needed to switch it up and become the roam, so that adagio can match Ringo’s range and become Wp adagio, or Cp Adagio. That would’ve worked better.

Did Samuel face Celeste mid lane? if so… I rest my case.

Did the dev have a blue/red name?

Because - - usually indicates a content creator not a dev.

Yes, his name is Shota or something, can’t remember. That match was way back in 3.0 but it triggered me so much because of how bad the matchmaker was in those days

I was bottom lane Grace versus Ringo…

This was one of the best Ringos I have ever seen and I got smashed hard.

He’s T10 in 3v3. If he’s still picking Ringo consistently as a high elo player he better be good. Also, Grace Lane was clearly nerfed in the patch notes either this past patch or the one before, with her weapon ratios going down on her A. Nevermind that Grace works vs bursty mage-ish types, not the DPS variety. Grace does not do well vs anyone who can kite her properly. So yeah? Ringo SHOULD be stomping you when you haven’t gotten back to POA yet?

Nevermind that abandoning/swapping lanes for pressure elsewhere would help alleviate your own bad matchup. I don’t know what you expected.

I thought you were talking about me with CP Saw but you mentioned the trolling and insulting.

Also, you clearly haven’t played anywhere near enough VG in mid+ tiers if you think this is a new thing. Tier mismatches have been a thing for a very, very long time, and is usually due to a specific player/group not having any viable matches. Given long enough, the matchmaker just inserts them into a group and forces a game. This is not a sign of VG dying, its a sign of your inexperience.

Skye mid never in lane. Farmstealing jungle. Celeste vs gwen top. Adagio followed taka… taka kept invading enemy jungle attacking Ringo. In teamfights I was the only melee. My side refused to engage with me ever…

It was a horrible game…

Did you keep engaging by yourself 1v2/3/4/5 or did you start waiting to follow up when your team picked a fight? Also, Adagio+Taka kept going after Ringo but it doesn’t sound like you tried to work with them? coughs

With all my respect, I am playing for a long time now(from the android start with big pause and from a year more serious) and am at poa silver (t8 silver on my main tho, played less) not boosted and soloq, i.e. my real tier in soloq. I had my fair share of decent to high level of VG. Had maybe 1 from 100 games during my soloq clumbs what I now exp daily. Smurfs is one thing, matching full poa gold/silver team vs soloq of 3 t5 players, 1 poa bronze and 1 t7 is absurd. In the current state and ranked I mean, before in 5vs5 casual was comon for t10 golds vs t5 or less.

Edit: when I say high level, I don’t mean t9 gold or t10 bronze, I mean private matches with golds and silvers. Tho I am not at their level ofc, but that doesn’t have anything to do with this discussion.

Shota is a community manager I think for Vietnam. Was a member of Infamous guild way back when so should have an MMR around VG.

No offense but your build is kinda bad

who looks at peoples rank anyway

Tb into raw crit instead???