I Was Just Reminded Why VG Means So Much To Me

Some Context:
I stepped away from the game in a big way maybe 5 months ago. I had not been playing heavily for a long time, but this was the first time I really committed to not keeping up with the game. I was disappointed with Rogues heroes, and the lack of real meta or balance changed, but more so I just wanted to spend my time on other things after VG being a part of my life for so long.

My Sappy Story:
Fast forward to a couple days ago, and I get a message from an old friend from my guild who I used to play with religiously back in the day. We have not talked in over a year, and he’s wanting to call to catch up. We chat for a while, and end up playing one or two games, it’s fun, but I have some lag and they just aren’t the best matches while he’s still re-learning the game. We have to wrap up and plan to play again some time over the weekend.

We hop on earlier tonight, and… it’s tough to describe. Do you guys remember the nights back in 2016-17? You have a couple friends you’ve managed to line up. Maybe one of you says you only have time for 1-2 games. but you get into ranking and after each one you spur each-other to play another. The thing that really surprised me is how much genuine novel fun I had playing the game. I expected to just have a nostalgia trip, in recent memory the game has really lacked any magic and I often felt very disaffected while playing. I got into that zone of just directly engaging with the game and trying to win. Not thinking about trying to have fun, what I think of the new heroes, not comparing my experience to VG in the past, just enjoying some 3v3 ranks with a friend and trying to win.

There was that buttery VG magic. Oh my goodness it brings me back. This game is so f***ing refined. League of Legends is not just better VG, there is something special about the way this game is designed. There are so many flaws, for most people it’s not going to make it worth it, but when you got a good friend and get into the zone of tryharding you can still find it in whatever mode you enjoy. I’m not trying to say VG never should have gone to 5v5, or never should have changed, that was not where things went wrong. I just… idk I miss this game guys. I’m going to miss this game so much more if it shuts down. I made so many friends and spent so much here, and we are going to try and get together every week for a while and gather some of the old people we played with. I don’t know what’s going to happen to VG in the future, but we are enjoying VG now.

PS: wow 3v3 still has a dedicated player base. We got fairly high quality match ups after 5-7m searches.

What a very heartfelt read. Glad you and your friends are still enjoying the game. I also agree and wish people would stop comparing League of Legends to this wonderful game. No, Wild Rift will not kill Vainglory as me and a bunch of other dedicated Vg players will still be here to enjoy what we’ve grown up with the past few years and maybe a bunch of new players will enjoy it too!

I know exactly what you mean. The 3v3s we used to have in my guild were such fun… The banter that went on when we got 6 or more players on was just something else. I remember the opposing team repeatedly banning Gwen solely to really piss me off, cause this was back in the day when I mained her and would not shut up about her.

I don’t wanna say I told you so, because I never expected 5v5 to actually have a negative impact on the game, but I was always for VG sticking to 3v3. It just felt so much more like a unique game that way, rather than another generic Moba.

I should try playing 3v3 again, I gave up when the queues got too long and they removed casual 3v3… It’s definitely the better gamemode.

I beg everyone here to go play VG again, just to show SEMC we still love the game and want it to continue. Even if it’s just a little one, let’s get a player spike.

Best post in a long time. Don’t have much else to add, except that I hope a lot of people can share this sentiment, this feeling, and hopefully a lot of people doing that will change something. Because that feeling is exactly what makes vg so magical.

It’s always nice to see the glimpses of genuinely good times with the game imo seeing as it’s state has definitely been rough for a while. As much as toxicity in-game has almost always been a notable complaint with the game, getting the perfect matches and continuing to party with those you got matched with are golden times. Really reminds me why I fell in love with the game in the first place. It’s sad to see everything that’s gone down with it lately bc as odd as it is as a mobile game, VG is definitely the game with the biggest impact on me by far,

TIL that these forums were back. wtf

I thought I put it in game moments and cheers. oops

Vainglory is ruined by SEMC and Rogue 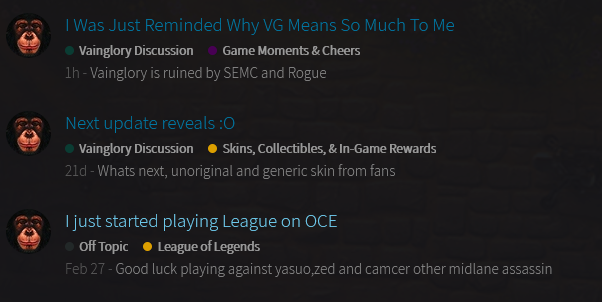 These are all of your posts in the last two years – if all you have to add are essentially snide remarks, I’d prefer you not post at all.

UPDATE: Just discovered this is an alt account … both accounts are now banned

I really don’t know how my own life would be like currently if I never started playing the game six years ago… To say my life is drastically different because of VG would be an understatement.

For an old timer, this game returned something I honestly never thought I’d have again. I stopped playing videogames more or less after my freshman year. I paid my own way though a private Catholic college ($$$$$), and just couldn’t invest in gaming devices. I still played with friends when visiting with them from time to time, but I missed playing MOBA/DotA.

VG was so epic for me. I couldn’t believe I was playing, what in my mind was a darn legit MOBA, on my phone, for free! I met some great folks along the way, and the best of them right here.

I wouldn’t have stumbled upon these forums if not for the game. Those who know, know, and those who don’t, never will understand why gaming communities are so fun. Thanks all, for making this one, one of the better ones.

Although, I bet some of you are thinking: dang-it VG, you brought us a long-winded poster, name change requester (2x, <3 you @hazeleyes), annoying challenge-of-the-dayer, senile old man. Sorry, gang.