I think this team created a casual meta for CW 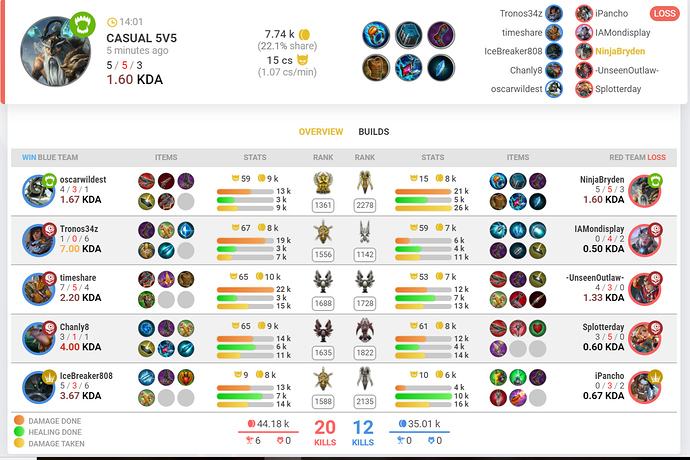 So I am in a 4-man party, so this is probably another 4-5 man party, which explains the insane synergy the CW had with the other players. I think this may be a huge meta comp for causal since the CW pulls enemies into Baron mortars, into SAW range, and into Goops or whatever. The pull also pulls you really far back and his DOT is insane if he stays on you for a while, and his massive tankiness makes that possible. This obviously will never work in draft since your strategy can be built around or denied or both, but in cas since no one expects your comps, this is a huge surprise to anyone who thought CW was irrelevant in 5v5 aka everyone. Just surprised such low tier players could have so much synergy together considering how difficult that must be, so I give them props for that. The CW was insane. The fact that CP Baron is absolutely insane also kinda adds to the CW’s effectiveness since CW was near Baron most of the time.

I guess the main problem for CW is he is very comp oriented. However, with the right comp he is a monster. I guess a big issue for that comp would be divey or fast heroes such as Tako or Koshka

lol Churn is not useless by far. He’s better for melee comps in 5v5. Have him roam with a buddy or 2 through jungle and pop out on enemies & watch the destruction.

i keep thinking you are talking baout clockwork

i was really confused

IMHO your issue is that you don’t have any assassins and for Reim to keep up with them he probably needed a CW and/or Journey Boots + Defense (so later game build than the enemies had). Churnwalker realistically provides engage and thats if he survives. You don’t really have anyone who benefits from the relative immobility of Skaarf, CP Baron, and Saw. If they stand together they blow holes in anything that can’t dodge the skillshots. Churnwalker relies on his allies doing damage to stay alive himself and is not otherwise tanky - if he goes for a hook as the vanguard he is much more vulnerable. If he goes for a hook while standing next to his allies his hooks have less effective range.

I agree that CW has massive potential, but only when his team can afford to be the one forcing engages. If your comp had a bunch of assassins and divers the match would have turned out very differently. Only 2 of the enemy are autoattack based.

It also doesn’t help that you have the unspectacular WP Lyra in 5v5, rather than the 3v3 arena where she can dominate. I honestly think that the sustained damage items were not at all necessary - they don’t help you win a 1v1 faster, and you probably don’t get to use them vs the enemy for very long anyway if Churn gets a good hook on one of you. Better to maximize the burst - he built an Aftershock and not Fountain after all. They literally have 0 ways to recover from your team wiping 1 or 2 of them out and ruining their team composition. Your team’s best bet was probably to focus on supporting you diving 1 or 2 less mobile enemies. Lyra has a speedboost even if her heal is less impactful with her build. Your team also has a fountain and a crucible. Trading those items to take down even 1 of the enemy is going to win you the teamfight imho. Reim has sustain the enemy lacks, so with a little help…

I fully realize its much easier to comment on this as a spectator who didn’t see how the matches went down, but I think this match was winnable. You probably couldn’t have worked it out without voice comms though.

Try Ardan as the jungler/carry captain. He works really well with TB and other items and can function as a pseudo-assassin that still is otherwise useful due to his perk when you build some roamer items alongside.

Baron is a pain, what you need is someone with the ability to dive on him, you don’t appear to have this so you’ll believe he is a god, he isn’t. I’ve felt this pain in game before, reim into him isn’t great he can kits you whilst blowing up your carries from a age distance.

Yeah I mentioned how we did not have heroes that could not take advantage of the immobility of the team like Tako or Grace, both of which I main, so it would have been an ez game if I went with either lol. Funny thing is I was gonna go Tako and decided to go Reim cause I use Tako a lot :^). It be ya own psychology