How to hand out 9 downvotes in 30 minutes or less 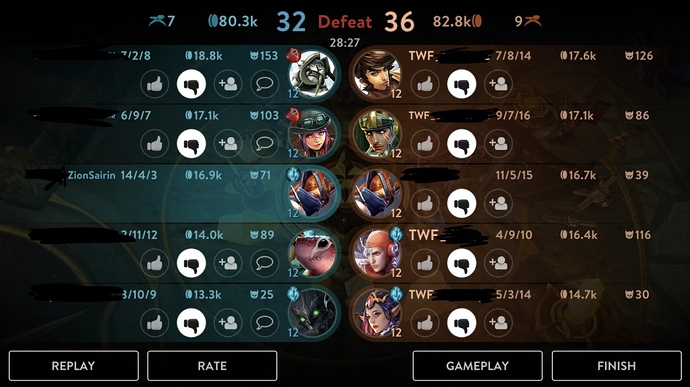 Now, that would be it normally but I feel there is discussion to be had.

”BUT ZION! WHY WOULD YOU DOWNVOTE EVERYONE ELSE IN THE GAME?!?!?!” you may ask indignantly. ”Clearly the enemy team was better than you and deserved the win!”

That’s where you’re wrong. I queued up for that match entirely solo, and if you look, four of them have the same guild name. Clearly a coordinated group.

Once again, incorrect. Though this time it’s due to you having an incomplete picture. The glaive in question immediately autolocked and did not pick a lane or role. I had picked jungle. They proceeded to run around the map trying to steal my camps from me. Eventually I started farming the enemy team rather than the camps, and he managed to pull ahead. He also built full glass cannon and did nothing to help the team in fights.

Joule, on the other hand, had problems in the late game and was never with the group, earning a simple unskilled mark.

Skaarf was, once again, not with the group and died before fights even started.

Churn was quite the piece of work and clearly did not know how to play his role, as he never once used his support items to save anyone but himself (and he failed at that, typically.)

Now, this last one is petty but as the crystal exploded I rounded off a quadra kill and the enemy Taka taunted even though they were clearly outclassed as a player.

In other words, everyone sucked, BG, f—k your 4 man premade.

Surprised Taka made it through the banning phase

It was probably a 5 man, iirc you can’t queue with 4 people.

It was probably a 5 man, iirc you can’t queue with 4 people.

You can’t in ranked. Casual is free game though.

2 Taka’s confirm it is casuals. it would be interesting to see builds.

Not entirely true… at t6 I get a LOT of instalocks (Usually saw or some guy who wants to be lane) It happens when I’m in a party with my bro, and we are very tempted to troll the guy by both going lane. As a rule of thumb, if you instalock you suck at the game… we lost that game.

That’s rough buddy. I woulda reported them all too

its on the screen shot buddy.

Ah, I phrased that wrong. You wondered what the builds were, and I didn’t know if you had noticed his name was uncovered, so I suggested you could go find the match on his vgpro. I realize now it was an offhand remark more than an actual question though.

Sometimes I say stuff without thinking it through too much…

yeh i do that too. lol. thank the forums for the editing feature. lol.

I proof read myself over and over to see if my sentences could be misinterpreted, but yeh, i understand. happens to all of us.