This hero idea revolves around reacting to enemies and allies as well as being able to manipulate cooldowns of himself and others. Reacting to others causes effects and events to be mitigated or reduced while skillful reactions allow Tempus to manipulate his own cooldowns effectively.

Whenever, certain conditions are met, Tempus gains a stack of Tempo. Max 4 stacks. Stacks wear off after 5 seconds after no new stack is gained (Duration is also refreshed if max stacks but supposed to gain new stack).

Tempus chooses an enemy an creates a mark at its location. If the target’s location is 5 meters away from the mark, then tapping the ability again will cause Tempus to consume the target’s time. This will interrupt the target’s currently casting abilities and teleport the target to his/her location 2 seconds ago. If an ability was interrupted, then add one Tempo stack. If there is more than one mark, then only one enemy has to be farther away from his/her respective mark for this ability to activate.

Overdrive: silence the enemy for the remaining duration of his/her casting ability if applicable. If successfully silenced, then add one Tempo stack.

Tempus reverts time on an allied hero, cleansing all cc and restoring health equivalent of 50% damage he/she received within the past 2 seconds. If Backtrack is activated when any ally or enemy is within 3 meters of Tempus, then add one Tempo stack.

Overdrive: If Tempus cleanses a cc that interrupted the ally’s casting ability, then remove 50% of the ally’s cooldown for that ability and add one Tempo stack.

Tempus distorts and shatters time and space within a 5 meter radius. Any friendly cc done to enemy heroes within this space will leave a 1 meter circle on the ground.

When the distorted area returns to normal after 4 seconds, the circles instantly proc its respective cc at 1/4 their strength/duration and deal damage (this ability’s damage, not allied ability’s damage) onto any enemy in its circle. Successfully hitting at least one enemy hero will give one Tempo stack max.

The idea came to me when I was thinking about being able to react and counter others. I wanted to expand on this and promote it, which I decided to be through cooldown reductions. At first I wanted to have a lot of hard cc, like Causality (A) stunning after teleport or Backtrack (B) emitting a pulse that stunned upon activation but I felt that too much cc and too much cooldown didn’t fit together. I also added a lot of restrictions such as effect only available through ability interruptions or 1 Tempo stack consumption for A and B per cooldown cycle so that cooldowns didn’t snowball out of control. Interrupting abilities also promoted my intended reactionary playstyle. I wasn’t actually sure what to do for my Ult, but I decided to take an idea from one of my old hero ideas and change it up. The other hero’s ability reactivated all allied skillshots at reduced damage after the area expired, but I decided to use cc instead of damage.

I have no idea what to name this hero. I was thinking of Tempus (the latin word for time), Kronos (Greek Titan god of time), or Planck (Scientist Max Planck who developed Planck units for quantum physics). I guess Tempus won because it was similar to tempest which was cooler I guess. Although Planck would’ve been nice considering the auto attack is a burst of light.

at 4 tempo stacks this hero will have 40% cooldown acceleration… include a clockwork, his A ability would be up every 2 seconds. include any other CD item and it’ll be around the 1 second mark… meaning a skilled player could actually rewind the enemy hero’s time, due to -

The B ability is abit hard to understand, cleansing all cc in the last 2 seconds is actually quite a long time. interrupting an ability? this could be abused quite badly to chain double ults.

The ultimate is even more confusing. what is meant by “friendly cc” ? lance’s stun leaves a 1 metre circle that can stun anyone who touches it? what about Ringo’s slow?

needs more refinement… but stealing someone’s CD is a pretty cool idea. I would be so surprised if i teleported 2 seconds back with my CD reverted back 2 seconds as well… I would think it was a server bug or lagg.

I honestly don’t really think general stats are very important, maybe with the exception of movement speed. This is a full support hero with very little damage and it’s stats should be typical of most other supports.

For the A I admit I chose the numbers on the fly. I didn’t really pay attention but what I was intending way maybe 5 seconds between each use or if you use the perk, maybe 3 seconds. I did consider the repeated use of A though and that’s why I added a distance requirement and a small window to use the ability rather than using it whenever.

The B doesn’t cleanse cc for the past 2 seconds, it is only a cleanse at present time (although there is really is no difference if you think about it. Any cc 2 seconds ago would either already expired or will be gone when present time cleanse is activated.). The 2 seconds applies to the healing from incoming damage. Also, the ability does not interrupt any ability; it only cleanses the enemy cc that interrupted. Say you have an ardan using gauntlet. Enemy Catherine stuns him out. You use B and gauntlet gets half it’s cooldown refunded. There is no way to abuse this since 1) interrupting an ability while casting means the ability hasn’t even fired yet so in total, you only used it once but wasted a lot of time and 2) it is entirely dependent on the enemies’ actions and cc if they choose to stun/sleep/etc an ally out of a casting ability or something. Of course, I definitely need to tweak my cooldowns.

Friendly cc means outgoing cc from your allies. The circle will appear at location of the cc. If ringo slows an enemy at some location, then the circle’s center will be at that location. If lance successfully hits an enemy at some location, under that enemy’s feet will spawn a circle. Also, the circles aren’t continuously active; they only activate for a brief moment when the Ult ends

I really like the hero concept and the theme of time. I drew an art concept of it for ya. I know I’m not the best artist out there but I tried my best lol. And you can tell me any details that you want to change(or ideas of outfits), i’ll fix it. 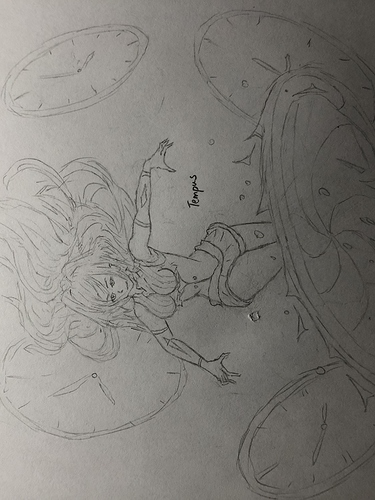 Don’t tell me you were thinking of a male hero

It’s doing the flip thing again ;-; I have no idea why.

I never thought of creating any visual design for the hero so I can’t really comment on what to change or what my expectations were. Either way I like the drawing and it’s definitely much more than what I am capable of.