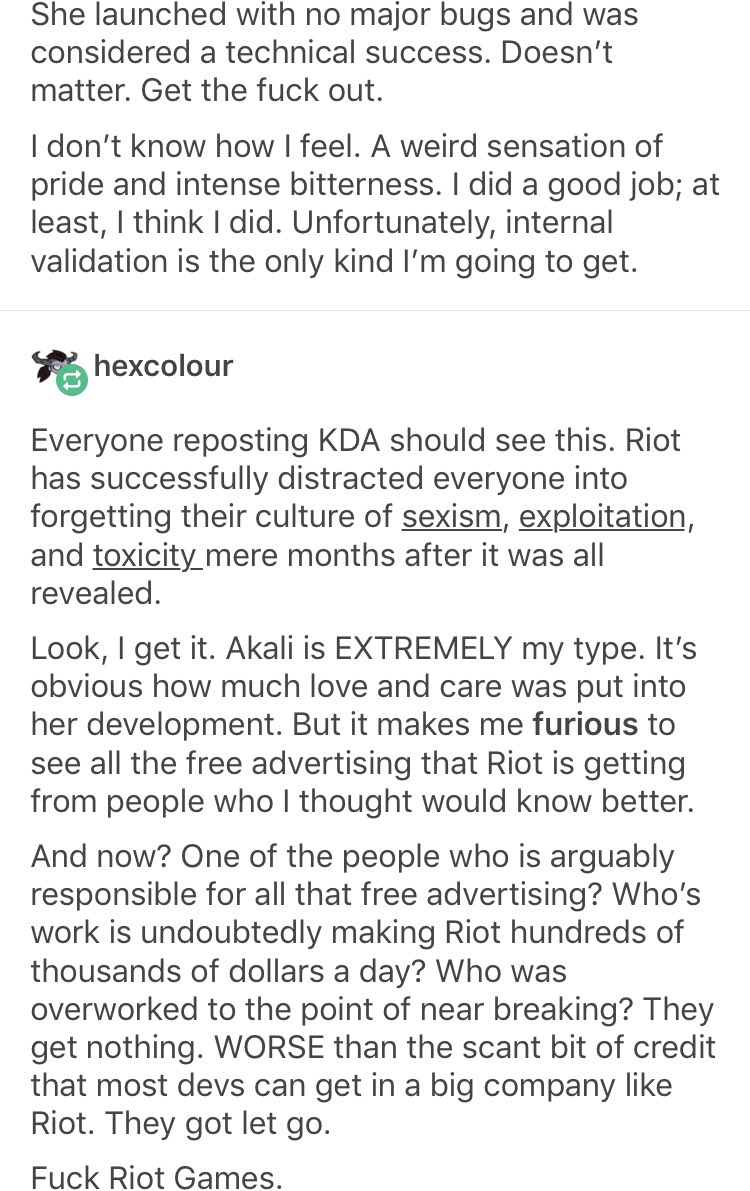 Imo, that’s someone with an agenda reposting someone else’s complaints about working on some minor features of the original Akali character – not the K/DA skin or video. In fact, in a follow up post, that person backtracks on some of what was said or implied in the first one.

If you want to discuss stressful working environments – in gaming, the software industry, or any other industry, let’s do it in a new topic. (I work in one of the most stressful fields there is, and I promise you that even if true, this person’s experience is not at all unique to Riot, gaming, or software development.)

Minor or not, Riot has consistently profited from a gender discriminatory business that goes through artists so fast that they need to hire from universities.

None of us know the reason she was fired, if her story is completely accurate considering some backtracking, nor do we get to judge the amount of work she did and justify if that warrants her invalidity. The issue is that Riot has a history of this and people constantly ignore it because they are distracted by the product that victims ( and I say “victims” for lack of a better word ) are producing. She could have done nothing more than code how Akali jumps and I would still be sympathetic.

However, yes. It’s possible that there’s an agenda and I recognize that. Despite that, her story is just the latest in a string of repetitive behaviour

FYI, moving to a new topic because I think the subject is worthy of its own discussion …

I’d heard some about the culture at Riot (specifically via the lawsuit that was filed recently) … it’s honestly disgusting to me how pervasive sexism is in tech, which is supposed to be the most forward-thinking part of our civilization. In reality, a lot of these places are nightmares for women (especially) to work.

You would think that since tech is the most progressive part of our culture, that it would societally keep up and it just hasn’t. I personally don’t have a clue about anything tech related, but I know so many talented women that won’t get the same opportunities for reasons that continue to baffle me. Sexism in any industry has become expected but a gaming company, to me, has always felt like they should be one of the most inclusive, given that their target audience is stereotypically slightly outcasted. As far as Riot, they have recently made steps in the right direction but they’ve had this culture for years and I’m shocked at the lack of impact on their reputation.

I’m confused, did she get fired because she was a female? I’m confused as to what happened, she design akali’s skin and was fired?

I don’t understand it either but all I got from it was she worked on the base Akali and did some of her abilities and now she’s fired because the K/DA skin is popular ?

She worked on akali, who at the time was a new champion to be added. She worked in a team working on akali, the work conditions however ended up in her developing health and mental issues. When it was finished for akali she got released soon after. Nothing her manager supposedly promised her happened. She has nothing to do with the kda skin nor music video, it just reminded her of her past due to it being so popular, especially akali. Akali was released with no major bugs and was considered a technical success but in the end she got no validation for her work.

The thing is, this is her words and as it was proven a lot of times before - not always the fired devs are honest (or people in general). If she thinks her firing was not fair and not laying on signed contract - she can turn out to the court (and she wouldn’t and didn’t as most likely she was released in the contracts term of the test period). We are again: “because she is a woman, she can’t lie” thing, maybe she actually didn’t do that good, maybe she didn’t fit the team, maybe she had argued with the management, maybe she was nervous and unstable, maybe she is not honest about the promises she got or put some people words out of context, maybe they saw she is not for that job pressure, etc.

We also really don’t know what part of the new hero was her doing and this alone also is not a reason to have the right to stay on given job. It’s her management and employer decision if they want to work with her or not. It’s not only about the work one does, it’s also about what person he is. After all one can learn, but will not change.

As @hazeleyes said, the stress in that industry is high and not for everyone.

And all that said - maybe she is right and was in an ugly situation, then again - this happens sadly in the IT industry and actually all industries… and far from only to woman. My point is that we don’t know anything other than some tweets of an angry ex employer of riots. Laying some accusation on previous riot doings is also wrong.

Yah, I agree there are way too many unknowns in this lady’s story. Not saying it isn’t true, but we’re only getting her point of view. And I also agree that while Riot may not have a good track record, we just don’t know enough about this situation to judge who’s right or wrong.

i don’t really understand… what part is the gender discrimination thing? a woman fired?

Yeah, am I missing something? The original post isn’t alleging gender discrimination… Riot’s toxic culture is mentioned later in the post (by someone else, I think?), but it’s not trying to say that the artist was fired because of their gender. Nothing about the post even mentions the gender of the artist.

I think they are jumping to the conclusion based on what happened before , a woman fired not because she was bad then she got fired because she is a woman based on riot reputation .

Why you assuming she is not bad or a liar , that’s the problem with people and history , they assume things don’t change and people keep doing what they used to do , you can’t suspect someone all the time if he did a mistake before .

Nah bruh if you have a history it only makes sense to judge you based on that history. I don’t know anything about the issue but that’s how the world works and how things make sense. You judge people based on their merit, their record, what they’re proven of, people don’t magically change. Not saying people can’t change but logically speaking you attribute things to people based on what they’ve attributeed to themselves.

Wasn’t there a no male gathering or something like that held by Riot?
I somewhat remember twitter going mad about it few months ago, that was kinda wierd to discriminate against majority of your player base.

Apparently some folks are pissed about new hero because he’s a chameleon human hybrid thing?

Well ppl will be mad at anything you gotta be more specific.

Yeah I know that’s why I said “all the time” you could judge but not all the time.

The person is male by the way
30