This year’s Granblue summer stream just finished a few hours ago, and it really showed why Cygames is definitely one of the best in the gacha business. The sheer amount of planned content as well as stream rewards is insane.
Some of the standouts for me were the M2 raid updates (hopefully the omega anima rates get buffed?), the new class, hard M1 raid autoclearing, Tower of Babyl, the Shadowverse anime collab and the skin gacha. I’m also really excited that there will be a way to get character FLB event items outside the events bc I’ll finally be able to FLB Zeta after I slacked on Spaghetti Syndrome and never finished the story. I’ve been wanting to replace Magisa on my fire team for FLB Zeta and now I’ll able to!
I’d say the main highlight of the stream for me though was the VS season 2 news! BELIAL LOOKS SO COOL WITH HIS MOVESET AND WEAPON SKINS BEING GLASSES PLUS PARADES LUST BEING HIS THEME IS AMAZING. I really love his purchase bonus as well, my VS Djeeta skin is most definitely gonna be replaced by his. Cags being the second season 2 character is really exciting too, I’m looking forward to seeing how she plays. Besides the characters, I’m surprised by how they’re giving more reasons to play VS in season 2 with the story expansion rewards and in-game events.
I’m also really looking forward to the news on Relink later this year! The game looks really cool to me from the early demo footage alone and I’m definitely planning on getting it eventually. I wonder what the purchase bonuses will be for it.

Yea the stream was amazing and today i finally cleared Dark Rapture Hard.

And time for me to get that Nier summer outfit and save money to get the Belial outfit code off ebay. 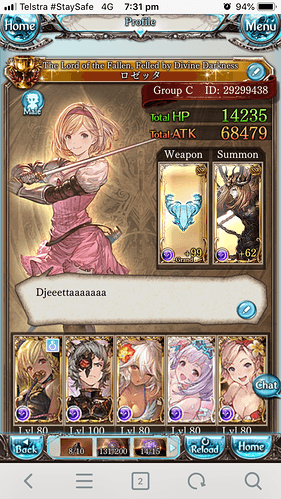 I haven’t made much progress lately. I’m still grinding M2 raids and my M1 summons, which is gonna take more time now that they got MLBs, but I’m still enjoying all the new stuff.
As for the summer event, I didn’t expect them to go all out this year. I knew that the free daily summons were coming, but the fiesta quests and the treasure rush were neat surprises. I haven’t gotten exactly what I wanted from the free pulls this time around (mostly just SKatalina and SIlsa for skin use and Belial bc I like him and he’s pretty broken) but I still made out pretty well from them bc the notable things I did get were SLucio, SNarmaya, and Owlcat. I haven’t gotten anything notable from the treasure rushes outside of a few extra gold moons from the single time I managed to clear the entire board lul.
Also it’s cool that you actually buy the skins. I haven’t made any actually IAPs myself, ignoring VS and it’s DLC, but the beginner ticket always temps me bc of the rlly good flashfes pool I have on it from when I started.

I honestly love the outfits in GBF plus im kinda used IAPs(used to play Dragonvale and Dragon City when i was younger way before VG and spent a decent amount on VG xD) ever since i was little so i dont mind forking out money for what i like to play.

I actually don’t mind IAPs that much either. I spent a bit of money on VG for a season pass back when it was a thing, some on Dragalia for a dream summon, and recently, a bit on Shadowverse bc Cygames has me fully in their grasp at this point lul. Some of the skins like Neir and Vajra’s are cool and suptix are definitely good value but the mobacoin prices are just mainly what are drawing me away from buying them.

i use Paypal for GBF purchases through browser on my PC