Finally! i hate tapping on a notif in the middle of a team fight.

It shouldve been something to have been in the game at release. but we all know how semc is with their programming

OMG… FINALLY… I CAN TAKE A QUICK NAP IN THE MIDDLE OF VAINGLORY. Wig

I am HOPING this is a sign that they’re working on their netcode … if so, perhaps we’ll see VG become more forgiving of network latency, which is much-needed.

I also agree, @hazeleyes , I’ve been waiting for a code overhaul. I’ve said before that I would take an update that did nothing but that, although I’m not sure about that anymore, due to the less amount of updates.

See people? When SEMC do something good there’s positivity instead of negativity. Really good update, though I rarely suffer from it but I did in the past so I know the pain.

FInally i can stop pinning Vainglory.

Finally, i can stop playing Vainglory. I mean give my team my full dedication

Also just a thought when 4.0 comes does that mean we will get a new UI? Kraken was the designer for our current one and since he left, I’m guessing if they get a new UI designer that he will just scrap it because people never really want to work on someone else’s projects?

YES! Gone are the days of a 2-minute wait for the app to re-open and reload. Not sure how it will be executed, but I trust the dev team nas it figured out.

Now tweak hit boxes to be more consistent and tighten up the network code and we’ll be good.

Samsung deals with this quite well, They’ve got “play games” which disables the back and menu buttons as well as blocking all notifications while in an app listed as a game. It works really well, I wish other phones had it too (recently switched from Samsung to Sony and it’s annoying) 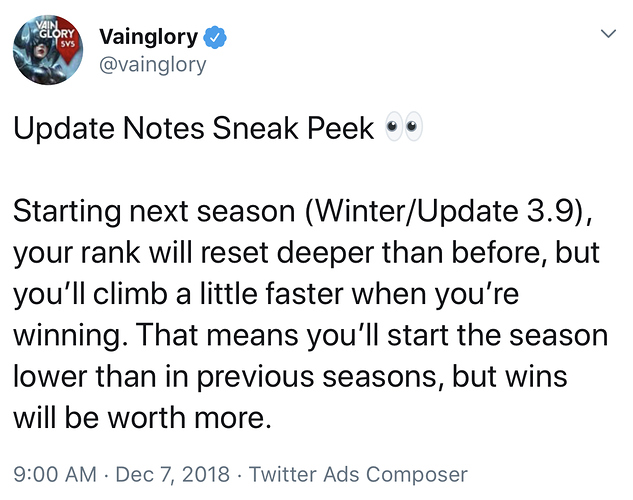 Its nice that they are attempting to clean the boosted from higher ranks.

Pretty noicey…but yah, it will be a pain in the ass climbing up to tier 6 just to get the next contender skin.
I mean i never rank.
Its like you hate something just because u hated it before.
I mean, especially in the lower tiers, u cant do anything against instalocking. Like even if that player is pretty good, he or she just shouldn’t instalock. IDK, it just ruins my mood. Outside of rank is at least acceptable.

AND I end up with either two junglers or two carries, so many times i have lost the count. And no one wants to compromise their position, (nor build defence, outta context? maybe.)

And my lance is all like “You are Samuel goddamit just getchur ass in the jungle already!!!”
Nope, he has to fight with vox in the lane. And did i tell u both of em were CP?

Thank you for sharing this. Looks like this update is sounding really good so far!

I don’t see how taking away more elo but still being boosted to your old rank (even more than before) would help with anything related to people not being where they belong. I just see it as completely pointless thing. You still match your old rank as MMR is the same. You can win 1 out of 4 games and you still get back there. I just don’t get the idea besides wasting some time.

If they reset MMR to be 1 or 2 tiers lower it would have actual impact. People that are good would climb up and then the boosted ones will have different MMR. Boosting will still happen, I don’t know how to stop it, but if you don’t belong in your old rank you’d have much harder time getting it back and climbing beyond.

I’ve liked most of what I’ve heard so far. I don’t like this. I work hard for my rank. I don’t want to drop too deep. Just make the boost last fewer matches. If it lasted 10, make it 5. I don’t think this helps the issue of boosted players much.

First thing I’ve been a bit “meh” on. I’ll have to play it out and see how it goes.