Welcome to the Vainglory Hero Spotlight, today we will be looking at Meissner, a magnetic Mekutonmo (Mek-A-Ton-no-mo) from Mekanism City.

Meissner is a well-renowned geologist in his native home who set out to study the outside world and better understand the geology of the environment in hopes of finding out how crystals are formed and to better locate veins of the precious resource. He seeks to discover the origins of the crystal mines and how the blue minerals both amplify magical power as well as technology. 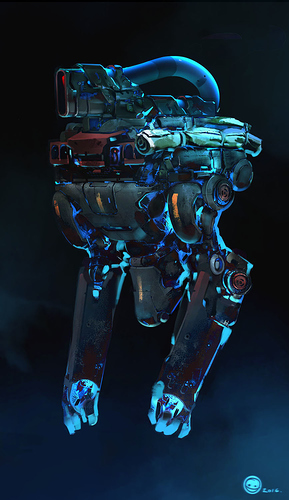 On the Rise, Meissner is a disruptive support who utilizes his magnetic powers to generate unfavorable positions for his enemies forcing away enemies from his team or isolating a vulnerable enemy. However, his relatively fragile composition requires careful positioning lest he is terminated early on. Should the situation call for it Meissner can unleash his devastating ultimate with catastrophic consequences for enemies when combined with other abilities from Meissner’s team.

When enemies marked with OPPOSITE poles are less than 4 meters next to each other they will be attracted and slam into one another.

When enemies marked with IDENTICAL poles are less than 4 meters next to each other they will be repelled away.

Meissner fires out an orb in the targeted direction dealing WEAPON damage to the first enemy hero, jungle monster or structure while applying and “N” or “S” Magnetic Polarity to ENEMY hero’s, structures, and jungle monsters.

Meissner dashes to a targeted enemy hero dealing crystal damage to all enemies along his path; refreshing Magnetic Polarity on every enemy hero damaged.

The targeted enemy hero will have their current Magnetic Polarity SWITCHED and all marked enemies along Meissner’s path will be STUNNED for 2 seconds.

When activated Meissner channels for 1 seconds, charging up power.
After successfully channeling Meissner pulls every enemy hero within a 7-meter radius marked with Magnetic Polarity towards him regardless of their current Magnetic Polarity dealing crystal damage.

Thank you for watching the Vainglory Hero Spotlight. Download Vainglory free on the Apple Appstore, Google play and the Amazon app store.

Awesome but how is this hero a support? I see damage and a bit of cc…

His passive is where most of his CC comes from

Cc does not make a support perse… Celeste has CC and is a Carry, so do Joule and Kestrel qnd Several others.

Catherine is one of the few CCers that is a captain and is played as such but she has a silence and stuns.

Lance isn’t played as captain and all other CC heroes either have more than just CC or aren’t a captain.

Think about it for a bit

This hero has no saves no barriers no heals nothing. Even Tony is a better captain …

I mean Meissner can also be a mid range control mage as well.

I thought him up as a support because he has relatively high base damage and he can displace enemies in creative ways. But it’s mostly because of his teamfight changing ultimate.