This is my 6th deinstall of the game.

I can no longer bear the stupidity and Toxicity of the matchmaker and players.

I was one win away from vainglorious at the beginning of the week.

Now I am just done with the game. It has gone downhill hard.

I get allies who refuse to midlane. People who straight up troll.

My allies just now were happy that we lost a turret, they refused to help out and started laughing.
Ranked poa gold… This game deserves to die and the people who run it need to go bankrupt.

Toxicity is at an all time high and the matchmaker is at its worst!

I might linger on the forums but I am done with the game.

You don’t have to say see you in two weeks cause I’m not going anywhere. Simply refuse to play this game anymore. It is unworthy of my time and attention.

Contrary to you good folks who have stood by so many desillusioned other gamers.

My bro @Xelios made it to Vainglorious. We played 3 matches today out of which one was good… We managed to win two though.

I can’t believe the stupidity. We had all the mechanical skill and EASILY could’ve won if not for stupid decisions. I swear VG solo que is the most toxic cesspool of individuals blind leading the blind creep stealing bottom feeder’ing game mode EVER created.

Dude dont let a game become part of ur life if u dont enjoy it whats the point of keep playing? Just stop for long time like 1 year? And comeback u see the different maybe… maybe…

i dropped from 2544 to 2485 literally because my matches i got stuck with boosted kids and went against parties of trio of people that i know. It was so annoying to play but at least im back up to 2528. The best part is being on gabevizzle’s stream and getting stuck with a guy that trolls despite him being a streamer himself. it was such an ez match them being level 7 while i was level 10 as kensei hyperfarming like crazy. if the phinn stuck around we would have won easily.

Its sad to here you say its the 6th deinstall for vg.
Have you tried taking breaks from it? I play other mobas such as onmyoji arena and LoL when i get triggered or tilted. And even take weekly breaks. A thing i see occur to some people ik is that they would play and play and get into multiple bad games with afk etc and they would eventually get tired of playing and of VG itself.

Anyways, please do come back into the future to see if your view is still the same

Don’t let the toxicity get to you. At your rank, I’m surprised you haven’t found other people to party up with.

I was around 2450 elo (VG bronze) with 57-60% win rate. After the 3.5 dropped despite I took the time to understand the new meta, dunno what happened to the MM/me/players, but I lost like 25 games from 30 and sadly in most I performed good stats/gameplay wise. Lots of noobs, trolls, soloq pairing me with full party that clearly had voice comms, whatnot. So, yeah, fun times.

I’ve been here since the android beta.
And I deinstall when I am done with their crap…

I’m not even tilted atm. I am just done with their piss poor performance.

I haven’t been playing that much anymore…
I’ve been kinda toxic lately but I don’t do it in game, because someone else will. (And for obvious reasons) 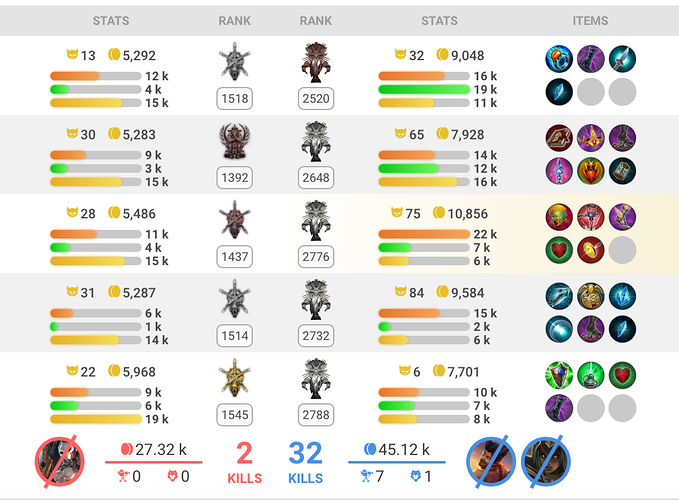 While I was soloq, t9g lows in that time and with a team consistent of t9 silver player, 2 t9 gold and 1 VG bronze. Fun 12 minutes of mocking from the enemy team (teleporting while fired from turret, kills, voice lines, etc). Oh, and it was RANKED.

Good job SEMC as no matter how bad MM is, it’s their choice to allow such games to happen. I personally was not in a long time waiting for game find either.

those things happens in ranked. Happened to me a lot of times, last was yesterday for me.

Yikes. That’s just wrong. And yet another reason I don’t play ranked – it’s bad enough in casual, but I’d be sooooo tilted if that happened to me in ranked.

There is the game, no name hiding as there is no shame to lose here.

How to want to play the game when things like that happens all the time in ranked mode? Absurd, not fun, enemy was mocking us for real, it’s not tilting - it’s literally a bad time and not having fun at all. Actually I was 2450 elo and VG bronze, in 3.5 the MM went downhill and I constantly play in uneven games - sadly most of the time on the receiving end and you see when I went in two weeks. Funnn /saltmine

I suspect they didn’t only tweak the casual, but also relaxed the ranked for faster que times.

i see your salt mine and raise you a salt city. heck, in SEA, i’d say it’s a Salt nation. Tilted doesn’t even start to describe it.

Legit the matchmaker tests me everyday to quit.

Yeah, but it was ranked (you can tell by the bans. A side actually wasted a ban). I regularly queue into unranked-worthy foes in casual. It’s kind of sad, I used to only play casual till like a month ago when I decided I wanted to rank up. My main game mode is still casual, but it’s no longer as fun as the games are usually one-sided curbstomps.

Oh, and good news! It looks like chaos queue is here to stay! Unless I’m misreading that is.

Yeah, but it was ranked (you can tell by the bans. A side actually wasted a ban)

Oh, and good news! It looks like chaos queue is here to stay! Unless I’m misreading that is.

I read that the same way. I am hoping we’re both wrong, because I guess they could be trying to say something else – given their lack of any discernible ability to communicate clearly, that’s a possibility.