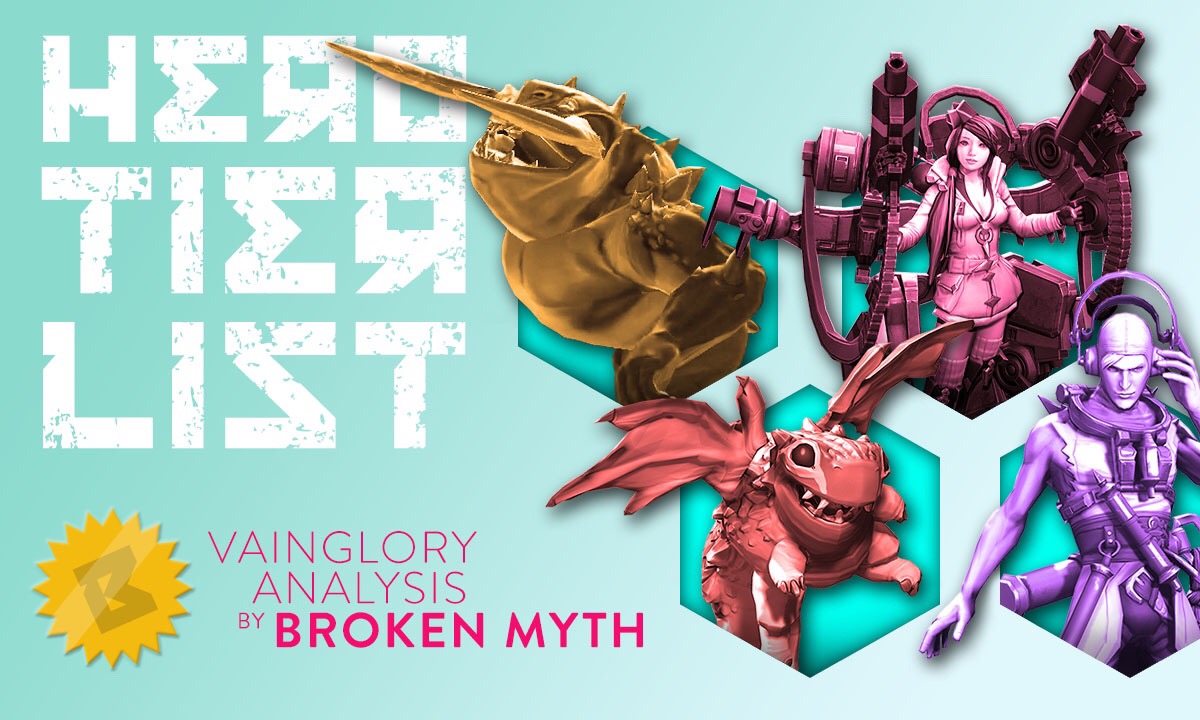 Jump into the meta with Broken Myth’s Vainglory Hero Tier List! See which heroes are the strongest picks for you in Update 3.7.

For what it’s worth i disagree re the jungle where CP Kestrel simply can’t be ignored with her massive DMG, quick clears and all round pain in th arse abilites.

Interesting, no love for CP Kestrel in jungle then? Think I abused her al the way to tier 9…

Without a captain following her, she will die the moment she gets focused by any jungler with a red buff
This is just my opinion tho

I know bro, all entitled to them… you seem to broadly agree with the BM meta them.

I’ve also found a lot of success with fortress in the jungle, think he has the highest win rate in every server at the moment.

I posted this two weeks ago in the Text Resources category, to keep it updated.

Broken Myth releases a hero tier list, regarding the current strongest picks, every few updates. As it is updated, this topic will be as well.

I know why CP Kestrel isn’t higher up.
I even asked Broken Myth themselves on twitter, and they gave quite a satisfactory response.

They said that CP Kestrel in the hands of a mechanical god is amazing but it is difficult to find that in soloq these days(that’s right it is a soloq tier list) so they put CP Kestrel as B in both Mid Lane and Jungle. Jungle it is more understandable due to the fact that Grumpjaw, Alpha, etc are pretty much dominating the jungle atm. But as Mid with the extra gold, CP Kestrel would be S-Tier if it was NOT talking about soloq as she can get her items very fast and snowball for a quick game.

CP Kestrel is amazing, and she is deserving of a higher place in the Tier List, BM admitted that, but because it is a soloq list they were forced to bring her down due to her high skill cap.

And you probably won’t see any until you get to t10, this is coming from a t9 lol

I abused CP Kestrel to get to tier 9 silver (stopped playing 5v5 recently); not sure I agree re the skill cap myself as there are others hero’s (Skye) who are far harder to play. She has huge range and massive DMG capability allowing her to skirt around at the back of most team fights /engages laying down mist traps as she goes. Her ability to snipe anyone, from anywhere at anytime also makes her an amazing threat re finishing opponent off.

I know. I am a CP Kestrel main and that is why I asked Broken Myth why isn’t she in S Tier when she is literally a beast right now. As I explained in my earlier post, CP Kestrel needs to be piloted by someone extrememly skilled(like you I guess) who can make full use of her potential, which holds her back from being ay higher.

But nevertheless if I made the list myself CP Kestrel will be S tier in Mid while A in Jungle.

I also abused CP Kestrel to climb 5v5 ranked recently to T6silver when I seeded at Tier 4 bronze(I know it sounds lame but I am not a very good player, I am better at stuff like analysing the meta and what values to buff or nerf a hero. I also don’t have too much time to play so ya). Her damage is crazy and her sniping potential is insane, it is just because there aren’t many good CP Kestrel players in VG who can abuse her so ya.

I’m not especially skilled with her, you’re right though she isn’t the easiest hero to play given how easy she is to kill if caught out of position.

Personally think she’ll be banned in the competitive scene she has so much AEO potential which mechanically sound players will abuse!!