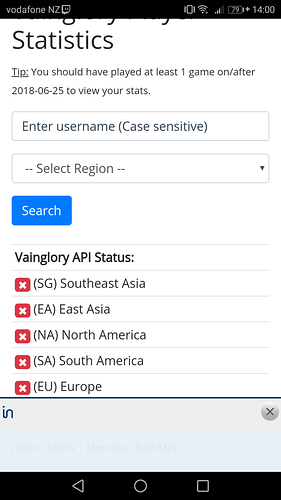 It’s been a couple of days now. No clue.

Calls to the API started returning errors around 1400 UTC yesterday. The specific error code is 401, which is an authorization failure, meaning that for some reason, the servers are not recognizing the requests as valid.

SEMC acknowledged my report within minutes, but the first reply from an engineer was 7 hours later. He said “it might take a while” [to troubleshoot] … nothing since.

Which API are you involved with?

Player cards are now down. So I can’t even see win rates now.

Aaaahhhh API ate too expensive for SMEC now too.

Probably due to lack of people still working for semc
#devilsadvocate

It’s back up and working for player stats.

It’s back up and working for player stats.

It’s sort of working … they are having to re-add each API project manually right now. Not all are working yet.

EDIT: I just got them to re-add Andi’s key, so she’s working again! I’d expect the other projects to get fixed shortly.