A statement from an old forumer by the name of Danthekiller

Umm, yea. My original forum name is mr. dan the killer. Kinda lame but yea. I made it 2-3 years ago. I’ve been on this community for tons of time and I’ve seen alot. Team SG and Rangers building the foundation of our current system of guilds. The birth of competitive play in VG. The SEA FB Group uproar (I was one of the contributor of this, leading to my ban in it.) which finally led to my “retirement” from the game. I’m pretty sure most of you guys no longer know me by now as I have been so inactive for the past few months or even the whole 2017. Reasons why? Simple, I chose Dota over VG (Is aiming to go pro.)

It hurts to see the original forums come to an end. Countless memories I had there are gonna be erased. and It was actually very painful to realize that the reason behind it was closing was rather quite upsetting. It hurts to realize that SEMC kept on rereleasing SE skins that was meant to be “only this time exclusive” I was there, tbh and they said and implied that these skins are rather special and like a collector’s item. And yea, I played some rank after gaining the extra time to play this game again a few days before the release of 5v5 and 3v3 was a hotmess. It felt boring, nothing felt right. Builds that made sense no longer works and the overall feel of the game was lost. And I actually prefer the old VG when crystal miners where not pre-obtained by the two teams and you need to kill them to own them. These made importance to jungle skirmishes, and the jungle back then was very fun to play. but today? It is damn boring and felt linear. no spice, no unexpected stuff like a koshka/cath tandem dominating you in the early game skirmishes. no more early 3v3 skirmish at the start of the game. It was completely lost and it led to the current state of the game. Laners just get gold, junglers dont even need the roamers (Captain does not roll of the tongue like roamer do.) leading to a huge existential crisis of what a support’s job in the early game. and the many heroes just feels useless over the newer flashier heroes. Playing ringo ain’t that fun anymore thanks to many new mechanics introduced in the game that made orbwalking almost obsolete. (Take note. Almost.) This game raised my expectations of what it is and now? I can say it’s quite boring and bland for a MOBA that asks for medium for competitive strategies. VG is a moba that has the meta completely controlled by the developers and I can say it became RIOT real quick.

Anyways, My name was Danthekiller and now I’m PoYo. Nice meeting y’all new guys who never knew me.
And to all persons who still remembers me? Oh boy. Are you guys still here? 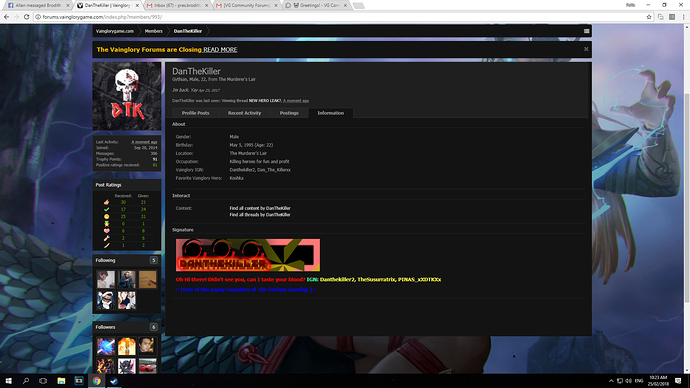