A HEROES JOURNEY: Roadmap for Solaris and his 4th rework 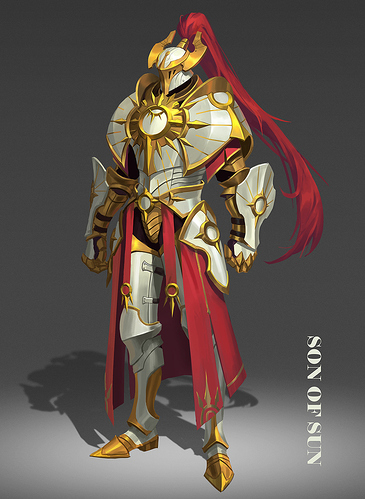 Welcome the Vainglory Hero Roadmap featuring the heroic spirit of battle, Solaris. In this post, I will talk about the hero itself and what plans I have for changes for him moving forward and the reasons for those changes.

Solaris was my first ever hero idea and therefore has a special place in my heart. I’ve always loved the idea of an angelic warrior descending from the heavens to assist those in need. A hero who smites the morally compromised without question with the light of day. This was what went through my mind when I created him and has been the core inspiration when it came to creating his character.

The problem currently is that the latest iteration of Solaris feels too much like an assassin with only his heroic perk making him a warrior. The following changes below should rectify these concerns and bring him more in line with other warriors

The old heroic perk granted Solaris damage reduction based on the number of enemy heroes near him whenever he landed an ability and followed up with a basic attack. In game this proved too basic and hard to counter for the enemy team since the indication for this effect was hard to see.

His new heroic perk will now operate on stacks of “Solemn Light” which are applied to enemies by Solaris’s basic attacks and stack up to 3. These stacks REVEAL enemies and are all consumed when Solaris damages an enemy with his abilities.

Consuming the stacks of “Solemn Light” grants Solaris a golden shroud (think celestial shroud) which negates the first instance of crowd control he takes from any source. The duration of the shroud is increased by 0.5 seconds per stack.

Upon learning his ultimate, every 3rd basic attack from Solaris will be a 4.5 meter piercing lance that damages every enemy along the path of his attack.

Again this ability is still solid even after these few years and thus will only have the BLIND mechanic removed. Instead the BLIND will be replaced by a simple pull of all enemies towards Solaris ( think Phinn’s polite company) which grants him fortified health based on the number of enemies he pulled in.

Also this ability will feature a new overdrive which applies damage immunity to his passive’s shroud as well.

He will create a field of knights (think unlimited blade works) which is about as big as Adagio’s Verse of Judgement which grants all allies inside damage amplification. Also allies inside will also gain Solaris’s passive shroud whenever he triggers it so long has he and his allies stay inside the area.

WHAT ARE YOUR OPINIONS? On this rework

Oh and his splash art will also be different

Can you link this post to the original one since I don’ t know how his first and second abilities work. But I think he is cool and a little bit complicated to understand. Do you make the artworks? That’s looks cool

I would also love a link.

My thoughts right now is that the new perk is awesome, and I absolutely love it but it is really strong. 0.5s x 3 means he could have it up almost all the time while stuck to a target (3 autos takes lass than a second with a little attack speed). This removes a lot of the skill I like about the ability since you would not need proper timing to block effects. I love the perk though, and it’s one of the few community hero designs I would genuinely like to see in the game. I will look over the rest of the kit compared to the old one later.

an you link this post to the original one since I don’ t know how his first and second abilities work. But I think he is cool and a little bit complicated to understand. Do you make the artworks? That’s looks cool

I would also love a link.

The one that is outlined in Blue

“Roadmap of Solaris and his 4th rework”

I think he is op because you are combining the best of each vg heroes into him. Phinn’s pull is the main thing I play him and it is very strong when play correctly, now it’s your B. Furthermore, this hero has a lot of resets and proc, therefore very op.

Keep in mind that the changes I’m proposing will also do away with aspects of the old kit. So not all parts of his skill set will be preserved for balance reasons. He will lose a lot of the resets he had.

Secondly none of these changes are part of the final hero idea they are just what I the creator have considered adding to the kit.

This is why everyone’s feedback here is important to me. I love to create unique champions that I hope are fun to play, But I also know I tend to created overtuned kits so I’m trying to balance it out.

Also one final point keep also in mind we are only talking about the abilities and not the stats of the character yet which will further balance the changes.

I like this hero concept and if you have some unique splash art, that would be even cooler

Sadly it’s not my own splash art it’s from other artists. I’m terrible when it comes to creating art on a digital medium.

But I pick the splash arts from artists and credit them to the best of my effort.

So long as the splash art doesn’t belong to an already existing game or media.

So now what do you think of this concept? I’m trying to bring Solaris more in line as a bruiser as opposed to an assassin which I felt his 3rd rework transformed him into.