I have been dabbling with WP Taka in top lane and jungle.

This game was Jungle Taka, I managed to kaiten a lot of incoming stuns and was content with that.

Can I get some feedback on my build and general WP Taka Ideas? 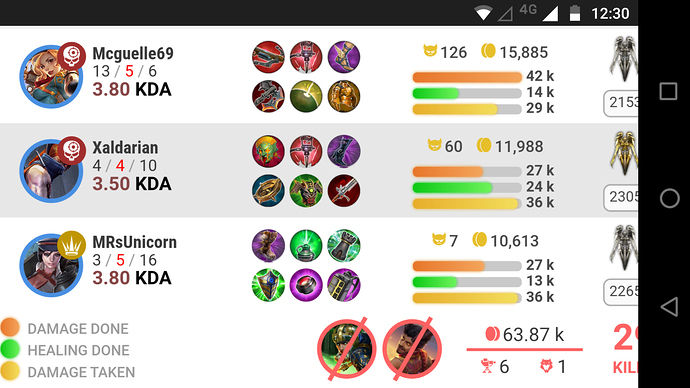 There are two builds ive seen- The SM BP BS/TT
and the BP TM TM. The SM BP is monster and you can snowball like crazy, BUT
Once it gets to late game where its all about teamfights, taka is pretty much useless. You dive? You die.
Running away from 5 opponents is close to impossible. You can kaiten and escape only one stun. What about the slows, roots etc? If your team can finish the game within 20 mins, Taka is good. Post 20 mins, he feels really useless. WP taka is really strong in 3v3 though cos there are lesser heroes to pounce on him.

I never get BP on assassins. Always better on tankier champs that can last long enough to make it effective.

Like sloth said though, late game just tough in general with Taka.

At what level of play might I ask? PS on Taka is rather weak as it offers too little stats and he already has a mortal wound available.

@slothslayerlawl
Was going for SM BP SSw Husk Aegis as a final build.
I was able to stay alive due to Kaiten+Kaku+boot out…

This is actually gonna sound like a really off (and probably wrong) build,but I’ve been finding some success in it,so I’ll share/ask for opinion.

Jump on them with X-retsu,proc tension bow,activate shiversteel and pretty much stick to them until they die.Not maxing Kaiten cause Spellsword covers the energy cost and the damage isn’t needed for wp build.

Once again,I’m not sure if I’m just lucky that I’m not being focused down or not.But it works for the few wp taka games I play.

I won’t answer that level play since that’s just a bias question, it doesn’t matter the level of play.

It’s the mechanics of BP that matter, stacking is the key and that’s why I’ve said it doesn’t suit Taka. Personally anyway. I haven’t seen noticeable enough stacks so if you have screenshots of consistently high stacks then maybe it can change my mind.

Nice build. I would’ve went Spellsword first item thou, instead of last.
You really need your B available more often than you think. Especially if you’re up against heavy bruisers.
Also your A to dodge at the exact right moment and your C to close in on them running away. you’ll probably had a much higher KDA if you went SpSw first.

TBH the reason taka gets rekt late game is WP heroes like gwen/ringo/vox whom he cant stick onto that easily cos they can easily keep distance from you with help of some CC unlike the the CP mages who cant really run away. As a jungler/assasin, your main aim is to remove OPP mage cos they do the most damage. And while youre on top of the celeste/skaarf, the OPP wp ranged hero completely destroys you. Ive found most success with MJ and aegis(Atlas sucks if your main aim isnt the opp bot laner and i just never use husk even tho it might be good). And if you go after lets say the ringo/vox instead of the mage, you will just see your health bar vanishing in seconds cos of the mages’ damage. And taka cannot spar with enemies like idris/glaive/alpha/tony/kensei etc which are generally the main picks now and are really pissing off(except alpha cos late game alpha is as bad as taka late game)

When you are massively ahead or feel like if you buy SB you can abuse enemy bot laner go ahead because its worth it. You want to buy SM eventually though because of the sustain since Taka plays less like an assassin but more like a warrior. Always buy double defense but if enemy has lots of burst get SH and pulseweave. I like pulseweave mostly because I play top lane Taka and that little bit of utility for the rest of the game is nice especially when you have a very good mid. WP Jungle Taka is meh and WP Taka bot is good too but you have to snowball effectively. Taka is strong but in skilled hands only and he’s super succ at carrying the game so if you are doing well yourself try going to mid and 3 shotting the enemy mid laner. If the captain is tryna mess with you, kill him ez ez because once again its worth it.

The double movespeed bonus would make you slippery as hell.

Check it vs bots, really works. Keep in mind that in some situations and even gamestyle, other items are better.

It’s not worth it because of how Taka’s strongest point is midgame (first item bought) and it transitions well into the late game until people you know decide to target you specifically. TT feels like a really bad item in general for people who don’t have any kiting potential. Don’t buy PS on Taka. I’ve seen people buy PS and TB on Taka and it makes me cringe because they are most likely not going to be able to fight bruisers well enough. For example I’m gonna say what happens between a Taka (SM BP SB) and a Glaive (SB BP PS) a full build: Glaive wins. Sure he cuts down your healing but Glaive is gonna win unless you consistently dodge his 100% crit from his B and able to X-Retsu him without taking damage the moment you get in so basically jumping on him from the shadows and landing the first AA. Taka has built in mortal wounds also so its kind of a waste considering that WP infusion makes up pretty damn well for the lost attack speed.

For me, the build I use in poa seems to work fine. Sorrowblade, then depending on situation I go either Breaking point or Spellsword, then as a third item I get the one I did not buy previously. Works really well ganking bot lane as well as the early game-mid game pressure and harassment for enemy mid and bot lane. Also has great clear rate which helps when taking enemy jungle, and can 1 v 1 any carries.
Edit: Sorrowblade over SM as you don’t need lifesteal with assassins, and also helps with x retsu’s wp ratio as well as bp stacks. better get damage early on taka then later.

I don’t get TT on Taka. If you are having problem chasing with his passive you’re simply walking the other way. You’re getting a passive that is the same thing he has built-in. I know it increases but it’s unneeded. I personally go SB Shiv BP. Especially in 3v3 I don’t like SM as it doesn’t give him the power spike he can have. In 5v5 SM is good though. Just personally go for Sb myself.

I won’t answer that level play since that’s just a bias question, it doesn’t matter the level of play.

No, it actually does matter. He’s not trying to be rude or anything, everybody’s been low tier. But the way of gameplay is very very different. The mentality, mechanical skill, experience. If it doesn’t matter why do heroes like SAW, Taka, Alpha dominate low tiers while mostly being bad in high tiers with the exception of Taka? (Alpha and SAW are meta only once in a while not saying they’ve never been good). Why is the meta different? Gameplay, draft, builds, everything is different.

It’s the mechanics of BP that matter, stacking is the key and that’s why I’ve said it doesn’t suit Taka. Personally anyway. I haven’t seen noticeable enough stacks so if you have screenshots of consistently high stacks then maybe it can change my mind.

You’re going with the mindset that if it stacks it isn’t for assassins. Makes sense right? Maybe but how does it work actually? It works by doing damage, not surviving better. This isn’t 1.12. An assassin would actually stack BP much faster than a warrior. Hybrid like Taka or Bf would be best as they are both fast and damaging but also play and feel like warriors. Glaive or Krul for example don’t benefit as much (that doesn’t make sense and I think it is wrong design choice but that’s how it is). They still use it but they can’t get enough stacks or they won’t be able to chase or they won’t be able to survive. It’s not like there’s many WP assassins but pretty much all of them are BP users. Taka, Bf, Idris, Kensei if you want. Who else is a WP assassin and doesn’t use BP? And on this point exactly, Taka does stack like crazy. He has one of the best AAs in the game.

This was meant to be a general discussion about OPs WP build and now it looks like people aren’t allowed to have a say or just get their say criticized. I gave my reasons, what you should have done is commented on the thread with your opinions, which I would then see and take in as a fellow forum member, but since you have specifically made the comment to me it does look like you are trying to shut me down.

Looking at general VG sites, WP Taka 5v5 has a low win rate to say the least and breaking point is used in slightly over half of the builds so whereas you argue in favour for, I can see that arguments against are just as valid.

The problem is that different builds work for different levels of play.

A vainglorious silver can smash through most people with a build that a poa can’t get away with.

I saw you are t7 and that colours your opinion on what is strong and what isn’t.

We aren’t discrediting your play on your level. But learning from players like @Bobmax will improve your own play…

I used Nivmetts build ( TT TM TM SS ) and its works really well against even healer tanks. Plus the build in immunity allows me to dodge atlas-es from the enemy.

The only problem i have is that its expensive so it needs to be used on a lane taka. I played him top but it can get a little oppressive