People commonly call out SEMC for being a greedy entity, only interested in our money or what have you; the big issue with this is not what these statements imply, but rather the context where they are used. The one that boggles my mind the most is about them being greedy for offering a lot of deals? Anyway, I’ll be diving into most arguments for SEMC being all about the money, starting withi:

Compared to the past, we rarely have any events like the Summer Party skin event or the Killer bunny Rina event, I guess SEMC only cares about pumping out more fresh deals™ to suck the life out of my wallet!

I’ll just start off by saying, events that get people hyped for playing are absolutely amazing and fun when done right, and I’d love to see some more myself someday too! However, a lack of in game events does not make them greedy. The two events that are usually brought up when people lament about events are when they rewarded diligent players LE/SE skin/s for playing often, in my honest opinion, I think a majority of, or at least a large amount of players enjoyed that event because they got them self a free high quality skinniest for playing. Now, can you really call them out for not throwing such quality skins out at people’s just for winning a game a day anymore?

While we don’t have many of those types of events anymore, what we do have is an abundance of events that promote community involvement, these are both good and bad since dedicated players can win big and feel included, but the casual players who don’t keep up with Semc’s social media events are often left out. They also have daily chests and sunlight levels that reward huge chunks of rewards as you progress, and then another injection of rewards at the end of the season, and from the rare chests you can potentially win a sskin as well, or at least grind out one you really like with the sunlight level payouts+ rare keys you get.

This isn’t an issue of greed at all! The main issue with this is that the way SEMC balances rewards is not in line with how a lot of players want to earn them, people wanna look forward to linking up with a buddy or two on a Friday or Saturday and getting a few wins towards a reward, rather than just picking a skin and capping out a sundial, at least that’s what I gather. Am I wrong in saying a good few of you would rather a decrease in sunlight rewards in favour of more in game events? Personally, I don’t mind either way at the end of the day, but if it makes the majority happy I can get behind it too.

Grrrr :mad:, damn SMEC keeps increasing the skin prices of SE and Legendary skins as well as the essence cost for em, have a heart you money grubbing executives :c

Well, before I dive deeper into this, let me start off by saying that skins initially came out with some titanic price tags since you had to empty the ice boxes several times to get each skin before finally getting that coveted legendary, don’t even get me started on how long it took to get a legendary completely free to play. Now, especially because of the chests, quests and sunlight level rewards, you can realistically grind out basically whatever Legendary> skin you’d like.Of course, if newer skins costed the same as the older skins without the need to go through previous tiers, they would be disgustingly easy to get for free to play players, and there value would absolutely plummet.

Moreover, the quality of the skins are getting better and better, if you showed me Dark parade Adagio III and Seraphim Adagio side by side in game, I’d assume that SA was the legendary skin while DPA was an epic. I mean, look at Evolution Sanuel! Easily an A+ skin that puts the older legendary skins to shame, and at a very grindable essence cost. I think it’s a very good decision to make these newer skins harder to get, and they are actually even easier if you account for deals as well as all the other avenues of resource collection.

Oh, understandable, but how can you explain the Sparkler Skaarf series?

Something like this, at first glance, can be seen as a purely for cash move by most, but I think the only ones who have a right to be very disgruntled are the collectors who want to own every skin in the game. Though, in my opinion, I feel like this perfectly captures the essence of a "Special edition., skin, more than one colour to collect and golden skaarf awarded to those who collected them all, if you’re someone who only wants one colour this shouldn’t even bother you as it’s purely cosmetic. I empathize with the collectors though, I see how something like this can leave a bad taste in your mouth, and I respect your feelings if it did, in this moment I’d understand if you called this instance in particular a greedy move.

All these deals that SEMC have going in the market really rub me the wrong way, I have to detoxify my mind with some reruns of Deal or No deal™

I really don’t get the argument where having an abundance of deals automatically makes you one of those Fortune 666 companies that are the new age breed of vampires from Wall Street. I mean, it’s a non scummy way to persuade low spenders/F2players to make their first/another purchase and it helps big spenders gain a lot more value for their money. I mean, what’s wrong with a deal that offers high value for a lower cost? I swear, this is the first community I’ve been apart of that ■■■■ about a value deal, it’s beneficial to players who want to/may spend and for the players who don’t want to, just ignore it? The world won’t end if you just scroll past the, or ignore them, let them stay for the players who are interested in em and don’t knock anyone for shelling out some coin for a steal deal, and you shouldn’t be either! I mean;

Nothing shameful about supporting SEMC. 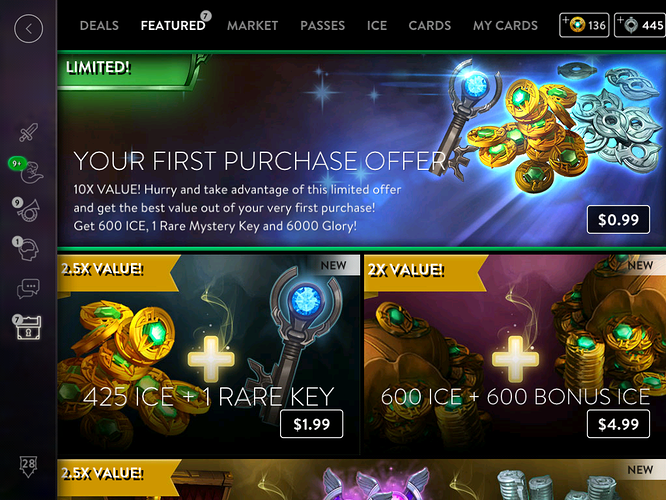 I really don’t like the RNG chests, they rarely give me what I want and just feel like a cash grab.

Well honestly, if you’ve unlocked a good amount of items in the game already mystery chests aren’t really for you, as its one thing that loses its value the more you have in the game. A lot of games have Gacha, and these chests in particular often give out a huge return, especially those epic chests. I mean, a skin, hero, glory and opals for 1k ice is the best deal I’ve seen out of all my past experiences of Gacha systems. Though, I do understand complaints about having unreleased skins in Mystery chests, but SEMC kinda toned that down by implementing a 1 week wait between the skin release as well as a talent bundle deal at an increased price, they’ve had 1 week wait periods for heroes ever since Vox, waiting 1 week in order to avoid Gacha systems isn’t really bad either I’d say.

They are also a decent way to earn money, while RNG is inherently a scumbag tactic, the chests only really fall short if you don’t have plenty to unlock, if you’re one of these people you really shouldn’t curse SEMC, it would be wiser to focus resources into getting the remaining items you want rather than run head first into piles of chests and blame SEMC for it.

The Talent system really missed the mark, and the upgrade costs and pay to win elements are no good, what were they thinking? 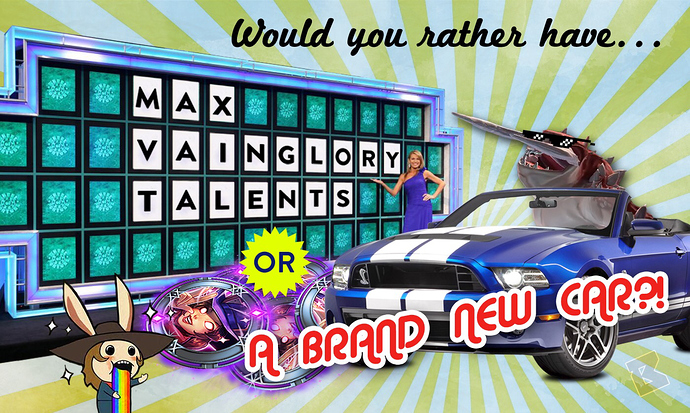 Talents were intended to be a grindable system, that could be accelerated by paying a decent amount of money, which sounds like a decent formula for making bank right? Well, ur didn’t work quite as intended and cause a decent bit of backlash from the community, understandable. A theory is that the conceptualization of this system with steep money wall and p2w elements was due to the influence of investors, I can honestly see how that could happen, seeing SEMC’s history of rewarding us for existing. Even though the price to pay for maxed out talents is high, it’s honestly way better than Clash Royale for example. Interactions in that game are cut and dry, a 10% difference in stats will almost always give your opponents advantages that really show when you get countered easily because one of your cards was just one leek lower than his. In Vainglory, one can still beat someone with a level 20 talent while rocking a level 1 talent themselves, there’s lots of room for outplay even with talents involved, Not only that, very high level talents are quite uncommon, so the effects of P2w can hardly be felt, as of right now.

Not only that, you really aren’t meant to max every talent for every hero, what will you do when you have all 3 petal talents maxed? There really isn’t a need to shell out glory for a max level in all of them, just spend your reasources on your favourite and go from there.

Not everything has to be attributed to greed, companies do make mistakes, the still fresh SEMC is no exception, Some people forget, but they’re still relatively new even if they have enjoyed a lot of rapid success on many fronts. Though, this isn’t to excuse the mistakes, it’s just so you understand that they are bound to happen.

It is at this point where a lot of the issues they have such as problems with the progression systems, abundance of currencies and inconsistencies with existing systems is because when they release something new, they often ask themselves “How can our non-spender demographic earn this for free?” even when we really shouldn’t be getting everything for free, I mean they almost made LE skins grindable, I mean cmon. Can you really say they’re all about the money?