What you wanna see (Poll)

I want more defensive items. But more like in other MOBAs where they would have more stats not just def or attack. And I mean mainly aimed towards melee warriors. Not tanks though. I mean Krul, Rona, Glaive, Ozo, Joule etc.

Other think I want is jungler to be a jungler and jungle heroes to be the viable ones in jungle. My first wish can be helpful for that to some extent but it would help warriors mainly. Not for example Taka or other assassins. Anyway what I meant was I want more diverse items similar to things basically any MOBA has and clearly defined meta (personally wish it’s the same as Zekent wanted it to be - top laner (tank) mid and support together, ADC bot and jungling jungler).

I want most of the things in this poll equally.

reeee where is the all of the above option?

Thats the point, what is the aspect that you want more than the others…

Do I hit myself on the head with a rock, or not?

This poll is designed evilly. I want them all equally

I want all of the above.

That being said, all could be added but I would still not touch the game until QOL was addressed. Just played today after not playing for a while. I was lagging the entirety of my second game, had a glitch with Vox my first game where nothing was bouncing, my game crashed twice, and I was constantly being sucked backwards.

The Vox thing was new but otherwise this game is suffering from well known bugs and connection issues and until it’s fixed, I’ve dropped from a hardcore player to a less than semi-casual scrub.

All the above, please, and thanks

A stable game without bugs, a game that functions well on devices that used to run it fantastically.

This is from last month: 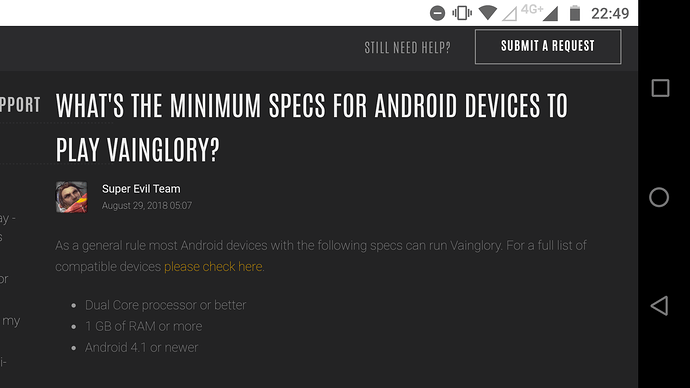 Are they kidding me? With double those specs you still have a bad in game experience…

Separate balancing for 3v3 and 5v5.

Less item expansion and more total rework. The way that items work right now is total dogshit. Utility characters can be useful with a Pulseweave and nothing else, while damage characters actually need items to duel. Pulseweave and base damage is so stupid that it’s replaced Bruisers in the meta. Weapon characters are so dependant on BP, but instead of nerfing it, they nerf SM, which was the main counter to tank meta.

Because Husk made it harder to come back against fed carries, instead of nerfing husk, they buffed shutdown gold. This level of incompetence is baffling.

For new items, we need good WP items with passive that are effective on bruisers. Real fun gameplay, like uhhhh

I’m gay and I have a knife that makes me invisible
Spellsword Stats (I’m lazy)
Passive - After using an ability, gain a movement speed boost and invisibility for 0.5 seconds. Movespeed scales off WP. The duration is halved for ranged characters, and they do not gain the movement speed boost.

Tension Bow
(New passive) - When completely unseen by the enemy team for 0.5 seconds, your next autoattack will gain a bunch of bonus damage. This bonus damage lasts until used or 5 seconds where you’re visible. (Detects invisible characters and cams kinda)

Them stopping to put stupid cc in every hero they release

Fire marketing team and whoever is doing talents balancing

Them stopping to put stupid cc in every hero they release

I want an actual sniper in VG.

What made me say that is that Silvernail is a good and bad example of what I liked about his kit.

He has alot of damage but no mobility. Thats a fair trade off.

But the amount of CC he has for a adc hero is not balanced imo.

I want a CC-less and mobility-less sniper that has the massive damage but has a suuuuuper high skill ceiling and a complext hero.

Sounds complicated ik but I can still dream.
Either that or a badass female swordsman that could put kensei and bf in their place

Sounds awesome. I wanted this in Varya but they only gave her sniping abilities in brawl

Then they got my hopes up with kinetic but…nope.

A renewed faith in Vainglory is something I’d like

This love of mine, such a wonderful game, who led you astray?

He doesn’t have more damage than other carries, so his cc is balanced in exchange of not having mobility at all. His traps are, in the end, a worse bright bulwark, and no one complains about BB.

The current state of the game is terrible. If I was just introduced to this game, I wouldn’t hold onto it. The player progression is garbage, the collectible/currency count is garbage, the RNG is garbage, and the matchmaking is subpar, to put it kindly.