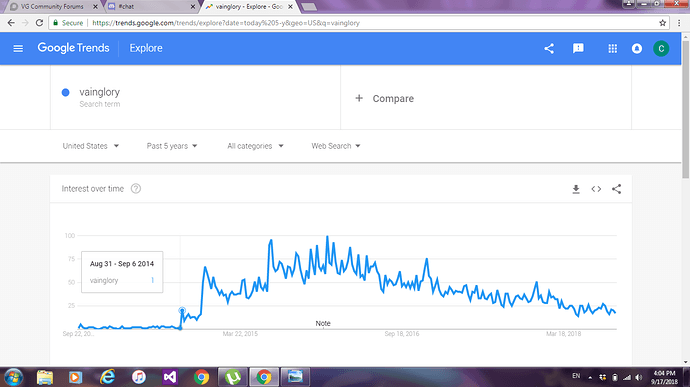 image.png1366×768 130 KB
According to the graph vainglory had an interest of 20 on the 6th of September 2014, that’s 5 weeks before the game was globally launched. The last point of the graph which is the 15th of September 2018 shows that vainglory has an interest of 17, so the game generates less interest currently than it used to before it was launched gives you an idea of how dead it is.

In a parallel universe: Vainglory 5v5 would still be in pre Alpha to this day and tested by trusted people in the community that would report bugs, give performance feedback, ui optimization suggestions, gameplay adjustments to the devs that would actually listen to the feedback and make changes to the game accordingly. The devs would also be working in the mean time on making Vainglory cross-platform on pc but also on console and optimize the game for both platforms. By the end of 2018, Semc releases their new game Vainglory 2 with a 5v5 game mode, 10 or so more heroes (including yates, kensei, kenetic, silvernail, tony and kenetic), the new defensive items + 1 or 2 new cp and wp items and it would be cross-platform and available on mobile, pc and console for free. With proper advertising by focusing mainly on content creation, Vainglory would have exploded out of proportion just like fortnite did.

Edit: New game would obviously mean that everyone starts from scratch regarding ranked which would give semc the perfect opportunity to either fix their current match making algorithm or work on a completely new one.

We don’t need graphs or whatnot to see that the game is dying. The only thing needed is to fire up the game, quo for 20 min go get unbalanced match with all kind of skill tiers, have a vague observation of the development and common sense.

If we combined all the servers and players into one global server, q times wouldn’t be that bad

i mean there is no ideal script that leads vainglory to a perfect path to success but there is no doubt 5v5 is a rushed product. If you look at the graph there is quite a decent spike which is around end of december 2017 and mid january 2018 which i believe is when 5v5 was in early access so it did generate a lot of interest but that interest went away with people noticing how dissapointing and rushed it was. If instead they delayed the release of 5v5 by a good 7 to 8 months, took their time to polish the game by taking into consideration community feedback and got their marketing strategy right vainglory could have very well bee huge. The reason why i suggested creating a new game for the launch of 5v5 is because it would be the start of a new era, it would be the only 5v5 moba (or one of the few mobas) that is available on every platform, can be played for free and still provides high quality gameplay. Launching a new game would basically createe a lot of hype and generate a lot interest if obviously they adverstise it properly

Your forgetting that VG is extremely demanding on devices compared to their competititors. They are blocking their own potential clients through badly scripted coding. Rubberbanding when there is no lagg, no way to personally change graphics settings unlike other apps.

Vainglory used to be the best mobile moba.

Now AoV, ML, Heroes Evolved and several other titles are outperforming Vainglory in every aspect. More stable game, improved graphics, several new game modes, more heroes etc etc. Not even mentioning the que time of several seconds instead of the years it takes for VG…

Ping/connection problems will kill the game. GL competing with 200 ping vs 30 ping + the whole game will lag = totally bad experience. This is a no go.

The “go” that se saw in the recent thread about what we play , is to leave only one mode 3vs3/5vs5, remove casual and reduce the fast modes, so that more players can que for the same mode.

They have lower pool of players vs 3vs3 2.8 patch while having a lot more modes.

The golden key part was ok, but they should kept it hard to obtain (instead of the backstab they did to every supporter) and continue to develop with the feedback of that hardcore dedicated people for 8m. They rushed the mode and this is the result, true.

The early access lasted 2 weeks that’s basically nothing, it should have lasted multiple months and every 2 to 3 weeks the devs listen to community input and tweak the game accordingly. The early access should have been given to people who are trusted to test the game instead of being obtained trough rng chests.

This shouldn’t have been flagged. Nothing you said was worthy of a flag, imho

they couldnt have done that. 8m would be too much for the players waiting without a key (but with the bigger game size), it wouldnt have been enough players to actually sort out the gameplay (no balance at all, even crazier than now) and bugs should be sorted out in testing before stuff goes live anyway.
what killed 5v5 was the lack of actual measures to correct the issues. all that semc is doing atm is shifting some numbers, but it dances around the issues and the pros figure out the patch way too easily.
if they went a bit more crazy with their changes and labelled the 5v5 mode as “beta” in the app until they found sth that works, more players would have stayed in the game.
with crazy changes i mean stuff like: blackclaw now moves down a random lane, wp buff no longer slows but gives lifesteal, cp buff no longer gives lifesteal but you get endless energy with less cp power, a third buff camp with a random utility buff (move speed, armor, shield, hp etc…)
dedicated jungler items and without them jungling is really hard in the early game would have been nice as well.

The early access should have been given to people who are trusted to test the game instead of being obtained trough rng chests.

its called the closed beta, it exists and it should have been used more. they moved themselves into a bad position by announcing a release date that was too early.

my opinion: semc lacked a clear marketing path from the get go. they try everything out a bit and then leave it in a bad spot to do sth new that wont work.
skins and card chests should have been revamped before the release of any standalone skin. (sth like, you can get one t1, one t2 and one t3 skin in order for free for every hero, theme doesnt matter, every subsequent skin costs more OR every hero gets 3 free skins and the rest is pay only etc…)
sunlight needs a change as well, let it depend on the number of skins you own, max bonus is at 100 skins and extra bonuses can be added later.

then the talents were done wrong. no levels, just the crazy talent and you can buy it once for glory or ice. not using a talent gets you a basic stat boost to allow you to compete on an equal level.
this would have reduced the money from whales, but it wouldnt have split the playerbase so much. the forum was in 50:50 split back then, with many supporters of talents not playing blitz, so they didnt care.

next would be the events or the lack thereoff in the past and lazyiness of them now. the only good event they have done until now is the rona le one. we need more of those, that bring players to play regularly and not those: win 10 in a row bs or pay 10k glory to participate stuff.
hard to get skins are worthless, if there is no one you can show those skins off to.

i think i could go on and there are more reason for the dwindling interest in vg, but i dont have the motivation to do it.

Was thinking the same thing.

The regular vg trends thread showing vg in a bad/dying state, everytime I see these I just think how long will vg continue? When and how will it end? Also wonder now how many new shiny things they can pop out to try keep people before it finally backfires

In a parallel universe, 5v5 was never created

Instead, vg became the first mobile moba to have mulitple maps.

Its devs, with the determination to do better, fine tune MM and set ranked straight from t1.

Vg intergrates with many communities online, creating a vast web of information.

Vg aknowleges their buisness model might not be sustainable. They create a patron and offer special in game rewards like an ice subscription.

Semc gains money as devs rejoice in their hard work being paid off.

This is what I hoped for vg before 5v5 came out. I was so scared this ambition would lead us down a dark path.

This shouldn’t have been flagged. Nothing you said was worthy of a flag, imho

Obviously, I completely disagree with you. Feel free to DM me if you want to talk about it.

Pretty much exactly what I (and many, many other veterans) advocated when the rumors about 5v5 started appearing. I think had they chosen that path instead of essentially discarding all the effort they’d put into the game before 5v5, the game would indeed be in a much better place today.

I agree that might’ve been a better option but that’s not always the case. I really thought people chose other mobile mobas purely because of 5v5 but that wasn’t the case. Or maybe it was and VG was too slow too it, but then again HoC had 5v5 and failed. I really don’t know what would make a game succeed and I think part of it is randomness and whatever the players flock too but I also believe that VG did a lot before 5v5 to make VG fail and they didn’t really care to make it better.

What makes Vg stand out from any other mobile moba is that it’s a really good game, it has amazing graphics, the mechanics are great and smooth, unique hero design, great controls and there is a very high skill cap (although it keeps getting lower) that rewards players that invest a lot of time into the game. Really what kept vainglory from exploding is poor marke5ing and the limitation to mobile only, cross-platform is a huge because hardcore pc or console gamer would actually give it a shot.

The mechanics are great. It stops right there. Everything outside of game mechanics isn’t done better than the competition…

SEMC / Vainglory had the “first mover” advantage in mobile, particularly with Apple highlighting them on iOS at an iPhone keynote. That’s pretty amazing visibility for any developer. I agree that there are a number of factors we probably can’t definitively identify, but as has been mentioned, poor/nonexistent marketing, failure to keep players engaged (poor out-of-match tools, guilds all but abandoned, etc.), breaking the two most-played game modes by adding talents (detested by a sizeable percentage of the player base), well-known missteps that eroded goodwill (LE skins, Golden Tickets), and a buggy, underwhelming 5v5 launch all have contributed to the situation Vainglory is in today.

I find it funny on how we all are negative in some way about Vg. Edit: I still love Vg despite my salty posts

When Vg dies, I want the rights to Lyra and Skye. I called dibs.