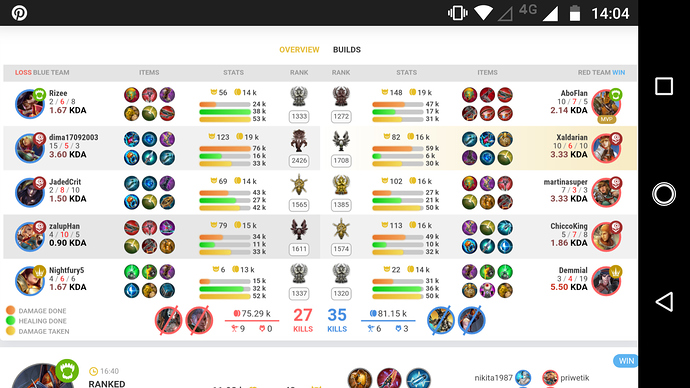 I added the enemy Celeste who was fenomonal.
He was a class above everyone else and incredibly difficult to put down.

He was friendly past match but it was very clear to me that his skills were superior even before viewing the stats.

This is the matchmaker at it again. He didn’t belong there yet he was.

We won btw but he didn’t deserve the loss.

You can play out of your mind and still lose due to your shoulders only getting so wide :^)

This is why I am staying on 3v3 rank for now

Well i am in high ranks so everyone will play well. I recently played out of my mind with Lance and it felt great. It was better since a couple games before my team played well, but they used toxic pings on me despite playing just as well as they were (We lost a close game). Should have been glad I have a large enough hero pool for me to play whatever they picked for me ._.

I got two VG silvers in the enemy team yesterday(one that was like 5 points from VG gold lol was playing celeste) while my team had most poa bronze. So, they played celeste and churn, obviously friends. Ignored their team and played just both all the game, well they won that game and celeste was 3.5 times the dmg from the second in the server. My team was unorganised and didn’t gang her(even tho I was grace captain and pinged + even build TB and AS as she didn’t have any defence, was glass cannon but churn easily protect vs only me diving… normally I would not build any of those two items on grace btw) + it was hard as churn was full protection build for her. Absurdly unbalanced… to match VG gold and VG silver players in t8 game… lol their team felt bad too as those two literally dominated the whole game leaving nothing to achieve for them.

Edit: btw, all the streamers are like roflmao for the matchmaker in 5vs5 ranked. Watched them all commenting on it in the same way we do. Not like one would expect something else, but they are not happy to be paired with t2-t6 players.

Agree I got incredible salty on Friday as match maker was clearly broken… in 3v3 I’m still getting balanced games with everyone within one tier of each other.

I’m starting to think 5v5 match maker is elevating scrubs based on win rate vs other scrubs (aka mmr is boosted). I’ve played with some terrible players in ranked 5v5 but when I look at their success rate in casual etc they’ve been cleaning up, perhaps they is being factored into their ranked MMR?

I know SEMC were meant to factor in casual gameplay when they launched 5v5 to ensure those early access players got better matches, maybe it’s coming back to haunt them now?

Maybe time people can play is a factor too.
I play relatively few games because of time constraints.

It takes me ages to get to my proper VST and low and behold it is reset again.

Today I was able to put in 5 matches but I probably put in between 10-30 matches a week. My VST will always lagg behind my actual skill.

Now with two forms of ranked play it is even worse.
Still in hotness with both 5v5 and 3v3. Will take me a few days to move up.

Even though I won all of my matches today…

I climbed very quickly in 5v5 I just insta locked jungle and hard carried matches… got to POA silver before sliding slightly back into bronze.

Find it difficult to grind both formats. I hated the fact my visual skill was 7 in 3v3 so I ground through elo hell to get back to 9!!! To those who don’t believe it exists trust me tiers 7/8 are sooo frustrating lol 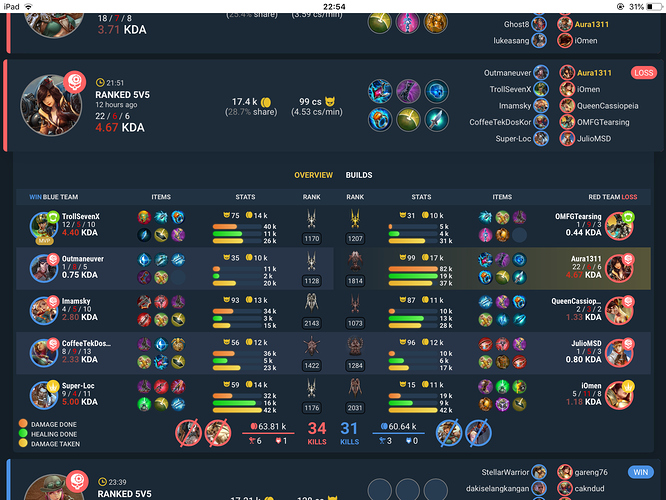 No, did I shame anyone?This text will be blurred

No cause no frustration was directed towards one player. Just the matchmaker

Well he should be ashamed look how bad he was… shut his down for player shaming guys in POA silver should know better than to build bonesaw on gwen when nobody has armour.

I thought they fixed the Matchmaker a while back?

They said that yes…

Bit 5v5 matxhmaker is better than 3v3.
Just got vainglorious people as allies and enemies.
I hate vainglorious players so much. 90% of them are toxic ping spammers who will sell their build when you do something they don’t like…

The higher up the more toxic.

I almost trolled the other day. why? cos some low tier shit ozo took my wp buff twice. Its natural when low tier players play like shit. I legit hardcarried and it would have made my work easier if they went afk or something cos they pick ozo into krul and rona and take wp buff when the cp buff is lying untouched for like 5 mins. They are just useless and bring down the whole team.

You are talking about a cp Ozo?
Ozo with PS or Spellfire can handle both Rona and Krul…

yeah obvi cp ozo. And no an ozo with spf/ps doesnt beat rona or krul. WP doesnt stand a chance. CP if you build spf what will you even remove from his normal items? Spf isnt a good choice on ozo at all cos he needs both AS and EOH. And without BM/DE he sucks.