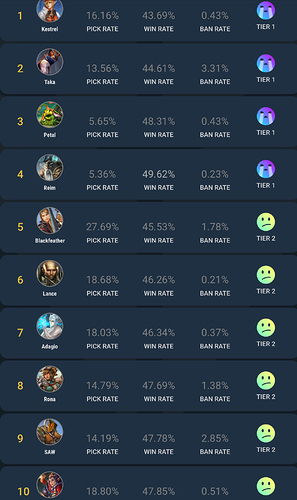 Choose three heros from the list and rebalance them without breaking them. Yes Ik the patch just started but im trying to create a discussion on crap heros.

Blackfeather:
Stats: Armor and Shield from 50 to 60.
C: No cooldown or downtime between both uses of the ultimate.

Bro rona top tier I carry games as her

As you just said, You

Plus its a discussion on what you would rebalance, not your experience with her

But please do change something else about another hero tho

Huh. Some of the heroes on that list do warrant some adjustments.

I think Kestrel, Blackfeather, and Rona can be buffed by upping some numbers without fundamentally breaking them or reworking some things. For these heroes, I’m not entirely familiar with them nor do I like them, so I can’t suggest much for them.

Hmm… Taka I think is flawed like SAW in the sense he is a noob stomper but requires less coordination with teammates to succeed like Fotress, who excels in almost all elos because he flares up a target with his A that’s a clear sign - “Get this guy! Wreck him!”

I have an idea in my head that’ll change some things around, but still retain what he has.

For Taka’s rework, I would:

This idea is so that he focuses on being a pure crystal power assassin. The perk has always been odd to me and is what I think restricts his balancing greatly. What I think would be good for him and push him as a niche but relevant pick into certain situations is to change his perk to:

“Taka’s abilities that do damage marks his targets ‘Assassin’s Prey’ on his targets. Only one enemy can be marked with this at any given time and this mark last for 3 ~ 5.75s (Level 1 - 12) (+ 0.5s for every 50 Crystal Power Taka gains from items) (Capped at 10s). Targets with ‘Assassin’s Prey’ on them remain revealed to Taka and his allies for the duration and Taka gain’s bonus move speed when he stays within 6 meters of the target.”

Get rid of the strange Ki-stack thing and put more stickiness for him. This way, he can have low cooldowns on his abilities without having to balance them between the old cooldown reduction of his perk and standard cooldown items including Clockwork.

Of course, this also has to come with proper adjustments to its energy cost and cooldowns to go alongside his new proposed Heroic Perk.

With that in mind, he also needs some adjustments to his energy and energy regen.

What I mean by capping is that he can heal as much as he wants, but the heal will not push his health above the capped limit. So if he’s at that health stage or above it, he wouldn’t heal. A bit harsh, yes, but’s a trade-off for all his other changes.

This way, his damage can be regulated a bit and wouldn’t be too easy to counter with just a Slumbering Husk

That’s all I have for him I suppose.

For Petal, Reim and SAW; they need a whole rework. They are artifacts of an age where mobility was lacking.

Petal needs to find a new identity and mainly just get one pet to reliably do damage.
Reim needs to have more ways to do damage that isn’t telegraphed so obviously while enabling him to survive and dodge poke. I’m honestly surprised he came to be since he came sometime after Skye, who showed that a lack of mobility is a death sentence against carries that can dance around you.
SAW needs to be less one dimensional and cheesy.

Adagio and Lyra need just a slight buff to their heals and a full rework of their B ability.

Adagio’s B is ok, but is at odd with the rest of his kit. Aside from being used as an early game poke tool, it’s just a costly ability that doesn’t give much in return.
Lyra’s B needs the in area snare again. It was what made her so good. Of course some adjustments shoud be made to compensate for such power, such as maybe a smaller radius and not slowing things down.

Lance numbers are fine. But what is holding him back is how difficult and iffy he can be to play at times. In low elo, players are less skilled to aim his shots. At high elo, he doesn’t give as much as some other supports do.

He can be meta, but it has to fall in his favour instead of adjusting him. He’s a victim of an era in VG where others out perform him and provide more assurred utility than he does.

lol this isn’t representative of the worst heroes so much as heroes people struggle playing with, at least half of them anyway. Kestrel is not bad by any means, neither are Taka or Petal. Most people do not play or build them right. Reim legit had a problem. Blackfeather’s kit isn’t as tight anymore due to his nerfs and I don’t think he has enough dmg to compensate for them. Lance is another hero a lot of people don’t play right. He actually requires a lot of skill. Adiago isn’t as great as he could be. He actually could use some kit changes. Rona is another hero people don’t play right, though she could use a change to her B. SAW isn’t bad in the least. Lyra could use a buff.

So; out of that list, Lyra is the only one that needs a buff tbh, and Blackfeather and Adiago need kit changes to some degree. At least Blackfeather’s slow back or something. Adiago needs a change to his B, for it to either be massively more powerful or for it to affect multiple people at once. His ult also isn’t that great and I think it should apply a decaying slow after the stun or during channelling. One or the other.

It seems if you delete saw and petal there is much less garbage in the roster. Lance Kestrel Lyra Adagio and Taka are great-good picks.

Now for the ones I would balance it would be BF, Rona, and Adagio.

For BF I would give him some more defense base stats (why tf does he have the same base stats as a ranged carry?). I would also make it so each level of his Ult he gains higher crit chance so people can run double tyrants. Might sound OP but he’s mostly going to burst down people who don’t build defense.

For Rona I would add a slow on her Ult so if she lands it people will get punished unless they boots. She’s not really a mobile hero despite seeming like one and that change I feel will make her better as she doesn’t get infinite spin anymore…

They can add some sort of lifesteal effect on Adagios B that works only on allies and jot himself. His healing is nice rn but as a support hero he is somewhat useless. CP is what seems to be most viable atm and it’s pretty good.

Reim and Kestrel are pretty strong, Lance is OP in the hands of a skilled player… I went 7/2/7 in Ranked without playing him much…

WP Taka is a monster too. Most people fail to use these high skill req heroes correctly and that causes these low winrate.

Lyra’s B needs the in area snare again. It was what made her so good

No, she doesn’t need that. Now she actually requires skill to stop dives. When she had that she was completely shutting down entire kits without counterplay at all. You can’t have an ability like that. In that sense Silvernail is far more fair as it offers counterplay and requires skill. She just doesn’t benefits from this meta.
Also, this numbers aren’t updated for this update.

Ok, fair enough. To be honest, she could use something better as her B or just lower the cooldown on that B a little bit.

Lance:
B: increase push range slightly (problem is this would make him broken in 3v3)

As for some of the others, Taka and SAW need complete reworks (potentially Patel too), and Lyra and Adagio suffer too much in the current meta due to the amount of mortal wounds going around with PS and SF in the game. (Adagio especially, at least Lyra has other parts to her kit)

Ok so reading through your assessments of Reim, I thought of something. Why not just decrease the travel time (and potentially time between 1st + 2nd hit) of his A? The idea with heroes like Reim is not to chase enemies around, they’re more meant to be right in the centre of a teamfight. For all you care you can have a Skye dancing around you, if you’ve got an entire enemy team around you, you can gain fortified health like nothing.

The funny thing is that Kestrel is basically the best bot lane pick after kenetic right now. As we can see the Saw was totally justified !

In my opinion she need s area snare but make her cd for her b
Like 60 sec but every basic attack (two missiles) reduce cd by 1.5
The reason they removed because cd too short like 25sec

idc if it actually makes him weaker or not, they say they balance heroes around win rates but yet they nerf one of the lowest win rates for the past 8 months. Just shows their hypocrisy, its a change designed to make newbies happier, potential customers.

It doesnt change saw at all…saw is so team dependant that he needs a rework to ever become top tier. The nerf does no shit, there isnt a reason to complain…
And noobs still cant figure beat saw unless players teach them too.

As i said its irrelevant, its the mentality behind the change that matters