Thoughts about the meta

So here are the heroes with the lowest win rates rn… any thoughts? 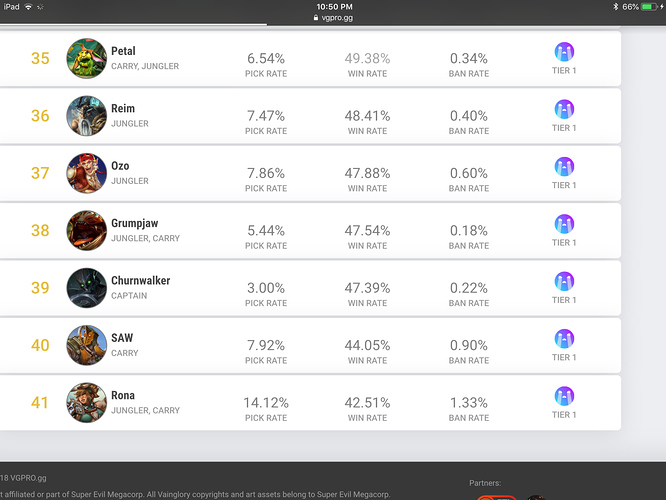 moved this to heroes etc.

imo, saw rona petal and ozo are the only ones there that are low winrate because they’re bad/too easily countered/are outshined by heroes who do something similar but is better.
reim grump and churn are still okay, problem is people are still stuck with the mentality that tb as is the only grump build (TB TM TM ftw). most games have like 3 people that can easily kite him, he’s still good as a counterpick for melee oriented teamcomps, and churnwalker really needs teamwork

You are sorting by “tier” and not win rate. The bottom 6 win rate heroes from lowest (all below 47%) are Rona, SAW, Lance, Kestrel, BF, and Skye.

Rona received a 5% damage nerf two patches ago as didn’t get the 0.1 attack speed boost that other heroes did this patch. SAW still is immobile which is bad on a large map. The final 4 are all high skill cap, long range, high mobility heroes who should be near the bottom due to outplay potential.

Rona sucks because of her numbers not that her kit is easily countered. I remember Rona was the queen of bot lane back when 3.2

To be honest, I kinda expected Rona to fall out of the meta the moment she got nerfed. She’s always been either OP or UP. item changes effect her as well.

Because her numbers were busted. Her kit is weak against kiting and CC, which this meta has and a lot.

Petal is a counterpick and needs a lot of time to actually master atm. The amount of seeds you put down and when all needs dedication as well. She is like Kinetic except you need to manage her so much more. That WR is kind of surprising though because that means the players who do play Petal are showing mastery of her to an extent.

Reim is hands down a counterpick, his WR shouldn’t exceed 51% because they he is just too toxic.

Ozo, personally I plan on using him more in casual matches so I get some good practice with him but both WP and CP seem like viable options so I don’t see why he isn’t a Tier 3 pick.

Grumpjaw, there are more ways to build him than one and people need to learn that.

Churnwalker, CD reduction on his chain should fix him, but he still is very team reliant.

Rona: They went overboard with her nerfs. Foesplitter nerf was fine it basically is trying to say that she should have less trading potential but the basic attack nerf crippled her. She can barely farm in lane and when she tries to trade she can’t. The only way to make her useful now is to passively farm for several minutes, get SM and BP and then kill enemy laner. Her late game is kind of the same as before but the only reason she was strong late game was because she used to get fed af. They can easily bring her back into being viable by just increasing her basic attack damage to what it was before or by like 3 points. Find a middle ground I guess.

Ozo is actually pretty good right now tbh… Especially with the recent WP OZO buff. It is just that he is so difficult.

Also because spellfire and poisoned shiv are everywhere and have close to zero counterplay. It’s pretty obnoxious imo.

Rona goes up and down all the time, she seems to be someone that’s S tier or D tier no in between. Same goes for Patel. SAW needs to be deleted. Haven’t seen any Grump for ages so I can’t really comment on him. Churny… I feel people still underestimate him + CP Vox, and tbh I’m surprised in general that he’s so low. Finally, both Reim and Ozo kinda surprise me, I’d think both of them (Ozo especially) could take advantage of the new Capacitor plate…

Rona got too many nerfed. She has been top 1 when 5v5 first released and after the nerf + more defensive item released, nobody afraid of her anymore. After 4 patches she becomes the lowest winrate hero.

P/s: honestly, if you play bot and premade with Rona on Discord, trying to win lane and take 2 turrets before 15:00 . It is very easy and will make Rona + bot strong. That’s the only way. She is not extremely bad as ya might think.