What does everyone think of Churnwalkers new skin? I’m not all that excited but it seems like a decent skin. and did SEMC announce its rarity? Rare? Epic? But seriously, what do you guys think about it?

I think they could have made something that wasn’t a clown, but that’s me personally.

Otherwise? I’ll be honest, It comes too close to the appearance of the 2017 IT for me, though I know it’s not a straight-up copy, there’s enough there for me to feel the creativity was stifled. The in-game model is well done, I’ll give 'em that.

I think pop-culture references are cool when done tastefully, and, while we don’t have a lot of those in Vainglory, it’s just kind of boring in the long-term. I want to see some new completely original, well developed skins. Something one of these artists really poured their heart and soul into. I’m sure they worked hard on Stranger Things Grumpjaw, as they did with 2017 IT Churnwalker, but can we see some original work? Give me some deep-lore skins, something that pertains to the universe that’s already established and not some reference/wall-breaking outside of it.

you about to catch these clowny hands

It’s a rare - here’s the announcement thread with some discussion:
https://vgforums.net/t/lurking-in-the-shadows-the-rare-clownwalker/2324?source_topic_id=2381

I think the splash art is pretty impressive! Haven’t seen the in-game model yet though.

Give me some deep-lore skins, something that pertains to the universe that’s already established

Plus one on this. I really like when the skins add something to the in-game universe.

Haven’t seen the in-game model yet though. 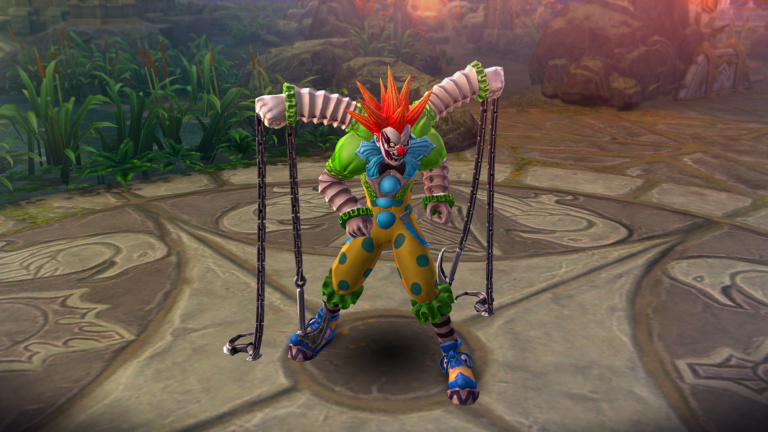 I was kinda hoping theyd do a little more with the hooks but at least they changed them a bit.

Wow, that’s pretty wild… It feels a little weird, in the way the Death Metal Krul skins are weird to me too. Maybe not quite my thing, but it’s really interesting. It’s probably pretty cool and really funny moving around in-game though, so I can’t wait to see gameplay with it.

I totally hear you. It feels off. I can’t quite put my finger on it, past the “I hate clowns” of course.

In short: “could’ve been better but whatever”

@dream @HipsterSkaarf I feel like what’s wrong with it is the brightness of it. It should be darker colored, or even have shady particle effects around it. With his lore and the skin lore even, the neon/pastel colors are out of place. And the polka-dots and shoes are definitely clown-y, but way too comical to not be out of place.

Yeah, you might be right. I’d have to see it in action to be sure though. The gameplay camera is set pretty high, so maybe they need the super saturated color to read from that distance. :shrug:

You make a pretty valid point. I suppose they were going for some sort of purist clown color scheme, but it’s just overwhelmingly “meh”.

i think the green doesn’t go well with the colour of his hair personally. but i do like the skin and will be anticipating the years in which i can get the blueprint. also in hsi splash art there is a pair of blue legs (i think in) in the fun house so i am wondering whether there will be more people related to the fun house.

i had thought up a marionette churnwalker who ties up the broken doll alpha lore in a beautiful marriage.

There are, and there are a few more recent references scattered here and there too iirc. You are right, though, the older references are probably fairly unnoticed.

The taunt’s likewise have a bunch of references in them as well.

I’d love to have more taunts, even if they were randomized on activation, having more than one taunt line/animation per character would be fun.

I like the clown option. There isn’t much that I feel really works well as a skin for Churnwalker unfortunately, so a crazy clown from funtown who uses those hooks and has two extra arms seems like a sure way to go.

The only other things I could think of off the top of my head right now would be a Chain Devil (D&D anyone?). Or maybe something like Goro with ropes? lol

Seriously though, you guys try to think of a skin that works well for a guy that uses chains and has 4 appendages (yes, I know two of them aren’t actually arms, but he’s gotta have those two extra things sticking out).

Can he have something like balloon hooks to hook the hooks? And can he have the recall animation that he flies away using balloons?

Hahaha! That would be pretty dang awesome!